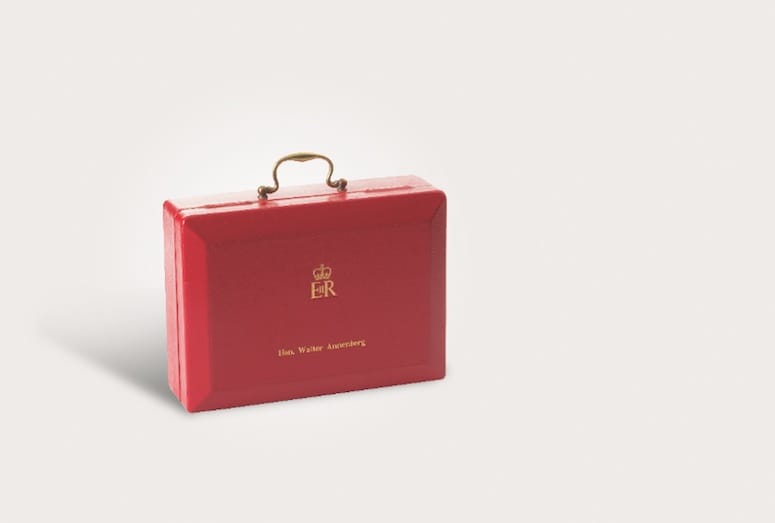 The two British colleagues and their wives gifted this red box to Walter and Leonore in 1973. The red-stained ram leather case, 11 inches tall and embossed with the royal cipher and ministerial title, was displayed in the Room of Memories. Ministers of the British government used attachés like this to ensure the secured delivery of official documents. The original design dates to 1860.
Photos by Mark Davidson/Courtesy Sunnylands Center & Gardens

The opening of Sunnylands Center & Gardens in 2012 provided the people of the Coachella Valley and beyond a glimpse into the elite world of the late media mogul and Ambassadors Walter and Leonore Annenberg.

Their estate in Rancho Mirage has hosted world leaders and captains of industry since the 1960s. Now, guests come to tour the A. Quincy Jones-designed house, soak in some of the glamour at the Frederick Fisher-designed visitors center, and marvel at the Vincent van Gogh-inspired gardens designed by James Burnett.

The finely curated exhibitions mounted in the visitors center — including shows of the Annenbergs’ collections of English silver gilt and Chinese cloisonné — have become some of the richest attractions in the region. The current exhibition, The Pleasure of Your Company: Entertaining at Sunnylands, showcases five monumental social and political events that unfolded on the property.

A sequel of sorts — Treasures at Sunnylands: Selections from the Gift Collection of Walter & Leonore Annenberg — opens Jan. 25, 2015.

Revealing the gifts and the fascinating stories behind them, the new exhibition will allow visitors to see the treasures and trinkets the Annenbergs amassed as the cream of world society flowed through Sunnylands.

The idea for the exhibition was born last February, during President Obama’s second visit to Sunnylands. When the White House staff confirmed that Obama would meet with King Abdullah II of Jordan at Sunnylands, the center’s staff scoured the archives for any prior relationship between the king’s family and the Annenbergs.

“Wonderful photographs emerged depicting former King Hussein of Jordan with Leonore Annenberg in a variety of settings during her year of service as the United States Chief of Protocol,” says Anne Rowe, director of collections and exhibitions at Sunnylands. “A mystery also emerged. We found a letter written by Walter Annenberg in November 1981 thanking King Hussein for a cigarette case.”

The staff is still examining many silver cigarette cases and boxes to determine which was a gift from King Hussein. “In the swirl of a busy household, this particular gift was either not identified as such or, more likely, the identification was separated from the cigarette case during the 30 years that it has resided at Sunnylands,” Rowe says.

Treasures at Sunnylands offers an impressive reminder of the full lives the Annenbergs lived. “As storytellers on a historic site, the Sunnylands staff attempts to interpret through objects, words, and pictures the true essence of the Annenbergs as individuals and the astounding breadth of their lives. The gifted objects from all over the world, signed with warm expressions of love and affection, create a powerful narrative. They surrounded themselves with the physical reminders of their loved ones, whether the gesture was sweet or grand.” RICHARD NIXON: The 37th president sent his assistant, Ronald Ziegler, to deliver this set of golf clubs — engraved with Nixon’s signature — to Sunnylands with a handwritten note to Walter saying that these are right-handed clubs and would be of no use to left-handed Walter, but that he should feel free to let others use them. HARRIET AND ARMAND DEUTSCH: Harriet Deutsch introduced Leonore to Walter Annenberg and married Armand the same year the Annenbergs were married. President Reagan appointed Armand, the grandson of Sears, Roebuck & Company CEO Julius Rosenwald, to the President’s Committee on the Arts and Humanities in 1981. They gave Walter this painted ostrich egg and stand by Barbara Embree as a birthday gift. It depicts scenes from Walter’s life and was displayed in the Room of Memories. QUEEN ELIZABETH II: Queen Elizabeth II made a special trip to Sunnylands for a luncheon with the Annenbergs during her 10-day tour of the West Coast in 1983. This regal cigarette box with her royal cipher was displayed in the Royal Sitting Room alongside photos of the royal family and other British friends. WALLIS ANNENBERG: The daughter of Walter Annenberg and president and chairman of the Annenberg Foundation gifted these jewel-encrusted bird table ornaments by Erwin Klein, one of the primary carvers of animal figurines for Boucheron in Paris. The Annenbergs were enamored with Boucheron decorative objects having personally chosen other objects from the Paris boutique while abroad. The pieces adorned a credenza in the living room. FRANK SINATRA:  The iconic crooner, who lived in nearby Tamarisk Country Club in Rancho Mirage, was a dear friend of the Annenbergs and a frequent guest at Sunnylands. He was also a bit of a prankster. In 1968, he gifted the Annenbergs with an Austin Mini Moke dune buggy designed by Sir Alec Issigonis for British Motor Corp. The glorified golf cart reflected Sinatra’s generosity and sense of playfulness.