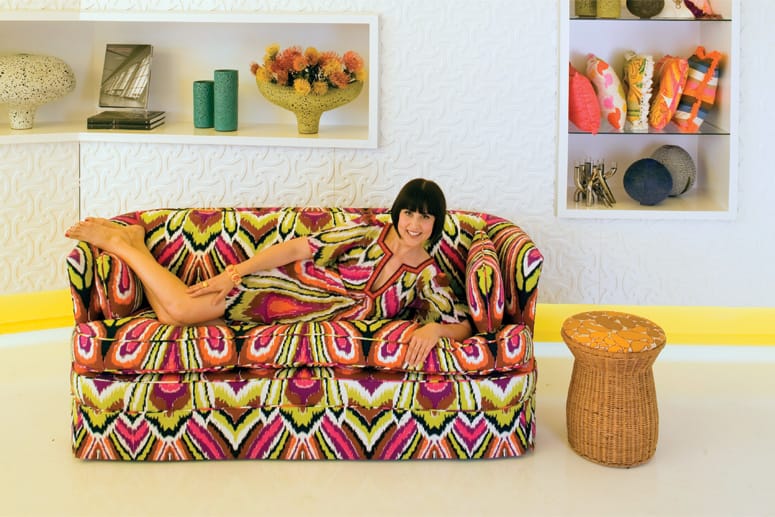 Though this chic area north of Alejo Road seems to have sprung up overnight, it went through growing pains on the way to becoming the hot block party that it is today. In the 1990s, empty buildings and crumbling facades reflected years of neglect and apathy.

Then the century turned, and something wonderful happened. Creative souls, courageous entrepreneurs, and insatiable visionaries appeared and claimed the area for their own. These early uptown pioneers pieced together a vibrant, multi-hued retail and lifestyle playground where other cool kids could hang out. And hang out they did. They tore down, rebuilt, and renovated. And they believed.

Designer Trina Turk, whose “California chic” fashions meld the glamorous vibe of the 1960s with contemporary silhouettes, opened her flagship boutique here in 2002, breathing new life into the Albert Frey-designed building and pumping energy into the entire district.

Wil Stiles, whose namesake boutique flourishes steps from the Trina Turk trinity of men’s and women’s fashions and home décor, says, “When Molly and I bought our first home in Palm Springs nine years ago, there was no uptown. Trina Turk was a vibrant and colorful island in a sea of empty storefronts. She had the vision and the ambition.”

Turk’s success brought national media attention, and attracted an eclectic collection of other entrepreneurs who shared her vision — McMillan’s Resort Wear, Palm Springs Florist, Tchotchkes, and restaurants Thai Smile, John’s, and Copley’s on Palm Canyon. People responded to the funky rhythm and the promise of style, flash, taste, and attitude. Retro boutiques opened with lava lamps and other cool period accessories; antique stores bloomed with the flowery décor of yesteryear; inventive restaurants opened with a flourish; and orange became the new black.

“When I first saw uptown, I could tell it was an up-and-coming area,” says Chicago native and Palm Springs transplant Tony Marchese, who anchored his popular orange-themed Trio Restaurant in the heart of the district in 2009. “Walking along the street, it feels European or like a city block. Everyone is welcome — from the Rancho Mirage ladies who shop and do lunch to the hip L.A. and San Diego crowd.”

Entrepreneur Tara Lazar saw uptown’s potential with razor-sharp clarity. Her calculated gamble on the district resulted in a winning streak that includes three restaurants (Cheeky’s, Birba, and Jiao) and the boutique hotel Alcazar Palm Springs. She wanted a place where food and culture had room to flower and where she could create authentic experiences that would appeal to lovers of art, innovation, and fabulous eats. Lazar opened Cheeky’s in 2008 so folks could enjoy a great breakfast away from the celebrity hype and dazzle of downtown. The daytime café quickly became one of the most popular dining spots in the city. Cheeky’s success spilled into the street and fed uptown’s reputation as a pop-culture destination. Trio and Workshop Kitchen + Bar followed, giving the district a solid choice for after-hours play.

Mary Jo Ginther, the city’s tourism director, watched the district blossom over the last decade. “It reflects the lifestyle of Palm Springs — there is a celebration of the past, combined with an appreciation of how that has influenced the present,” she explains. “There has been significant restoration of historic buildings, such as El Paseo Building, which now houses Workshop Kitchen + Bar, plus unique shops and services.”

Epitomizing the district’s high energy, Raymond | Lawrence is an indoor marketplace/retail “incubator” with changing pop-up shops. A pop-up shop turned permanent merchant, the nearby notNeutral is stuffed with home décor and accessories with saturated colors and sharp graphics. For new books, cards, gifts, and jewelry, shoppers look to mod-influenced shops such as Et Cetera and Just Fabulous.

The tree-shaded courtyard at the center of The Corridor at the corner of Alejo Road and North Palm Canyon Drive is the place to rest from retail therapy, re-energize with a drink from Koffi, and people-watch before hitting more shops.

Since 2002, when Trina Turk was the lone modern pioneer on this stretch of Palm Canyon, the Uptown Design District has become a bona fide retail phenomenon that has grown to include Realtors, a hair salon, financial advisers, a florist, and a boutique eyewear shop.

With each addition, the area’s vibe thrives and the swank swells. The northernmost outpost of style is now Modern Home at Racquet Club Drive, and Ginther applauds the expansion: “I would like to see the growth continue … and fill every charming nook and cranny.”