Thing to Do This Weekend: Jackie Collins, Terry Fator 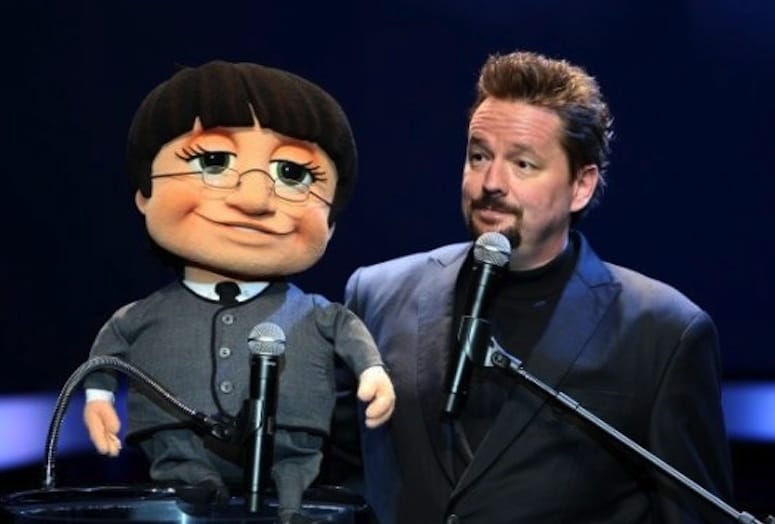 MAKE ME LAUGH
Terry Fator
In each of his characters, Terry Fator makes us forget he is a master impressionist and believe in the puppet he holds. He sings a range of songs from country to Lady Gaga. Fator is here for one night Jan. 18 at Fantasy Springs Resort Casino in Indio. STORYTELLERS
Rancho Mirage Writers Festival
In just its first year, this festival has been able to attract some of the biggest authors in the business. More than 300 tickets have already been sold for the four-day festival, Jan. 14-18, at the Rancho Mirage Public Library. Some of the names include Jackie Collins (pictured at left), who was featured in Palm Springs Life in November, and Pulitzer Prize winner Karen Elliott House, the former publisher of the Wall Street Journal.

Shirley MacLaine
The actress has led one colorful life, from running around with the Rat Pack in the 1950s and ‘60s in Palm Springs to dancing in some of the biggest shows and now securing a role in the popular PBS series, Downton Abbey. She shares all of that and more Jan. 19 at McCallum Theatre. Read our Q&A to get her take on Downton.

GOLF
Humana Challenge
The winner of last year’s Humana Challenge was decided in a playoff, and this year’s competitive field just might lead to a repeat scenario starting Jan. 16 through Jan. 19. The field includes Rickie Fowler, a native of nearby Murrietta, who makes his return to Humana after a three-year absence. Read his profile. FILM
Palm Desert Public Art Film Series
Just because the Palm Springs International Film Festival is over doesn't mean no more film festivals. Far from it. Palm Desert is doing its part by marking the third Thursday for a screening starting Jan. 16 and running through April at the UCR Palm Desert auditorium. First up is “Class of ‘83” directed by Kurt Sodering (pictured at right).

THEATRE
Joyce Bulifant
This is a busy weekend for Rancho Mirage’s Joyce Bulifant. First she teams with her real-life husband, Roger Perry, to perform “I Do, I Do” at UCR-Palm Desert to benefit autism, and then reads in Coyote Stageworks’ “The Man Who Came to Dinner”. Read where she finds the energy in our profile.

GOTTA DANCE
“Dance for Life”
See some of the best dance performances in the Coachella Valley Jan. 17 at the Palm Springs Art Museum’s Annenberg Theater from the November 2013 show featuring a broad spectrum of contemporary jazz to ballet to Broadway pleasers. The show benefits AIDS Assistant Program of Palm Springs.

FAMILY TIME
Sunnylands
The famous grounds in Rancho Mirage begins its Third Sunday program Jan. 19 with free admission and family activities like games, walks and arts and crafts. Learn all about this historic institution.

The Pleasure of Your Company: Entertaining at Sunnylands
Relive five major social events that took place at the Rancho Mirage palace, including last summer’s summit between President Barack Obama and Chinese President Xi Jinping (photo above of china used at left).

LIVE MUSIC
Haunted Summer
When John Seasons and Bridgette Moody left their respective bands, it created an opportunity to join forces and start their own. Watch our VIDEO to hear “Pool of Tears”, and see them live Jan. 16 at Pappy & Harriet’s.

John Pizzarelli
One of the best jazz guitarists and singers, Pizzarelli is considered “one of the prime interpreters of the Great American Songbook”, according to his website. He begins with Nat King Cole, but his influences spread to Benny Goodman, Les Paul and more. He performs Jan. 18 at McCallum Theatre. The Copa Palm Springs
Tony awards winner Levi Kreis (pictured at right), who made his mark on Broadway in “Million Dollar Quartet” portraying Jerry Lee Lewis, has the chops and the piano skills in this one-night Palm Springs gig. Watch our VIDEO to gain a sneak peek of the Copa.

La Quinta Public Library
Not exactly the first concert venue to come to mind, but the first performance for “Evenings with Friends” series starts Jan. 16 with “Ted Herman and Orchestra at the library.

EATS
Twin Palms Bistro & Lounge
After an eight-month hiatus following a fire, the Palm Springs restaurant is back and serving up the comfort food selections that keep’em coming back for more. Read about the food experience.

Late Night Food Bites
Out late and not sure who serves food late or in the wee hours of the morning? We do. Check out this time-saving list. STREET FAIRS
Ask the Rabbi
If you have ever walked Palm Canyon Drive during this weekly Thursday night street fair, perhaps you've seen the small table and sign that prompts, Ask the Rabbi. Rabbi Yonason Denebeim has been answering questions for more than 25 years. Watch our VIDEO to see a day-in-the-life of Rabbi Denebeim (pictured at left) on a typical Thursday night.

Open Air Market
Just down the street from the Spa Casino in downtown Palm Springs, vendors gather every Saturday only market from 9 a.m. to 2:30 p.m. through May.

FOR A GOOD CAUSE
Bring in Your Blues
Bring in your old pairs of denims and receive 15 percent off Fresh Produce Clothing’s new KUT Jeans in Palm Desert from Jan. 15-31. The donated jeans go to Cotton Incorporated’s Blue Jeans Go Gree recycling program.