Midcentury Modern: Modernism Week is the Place to Celebrate It 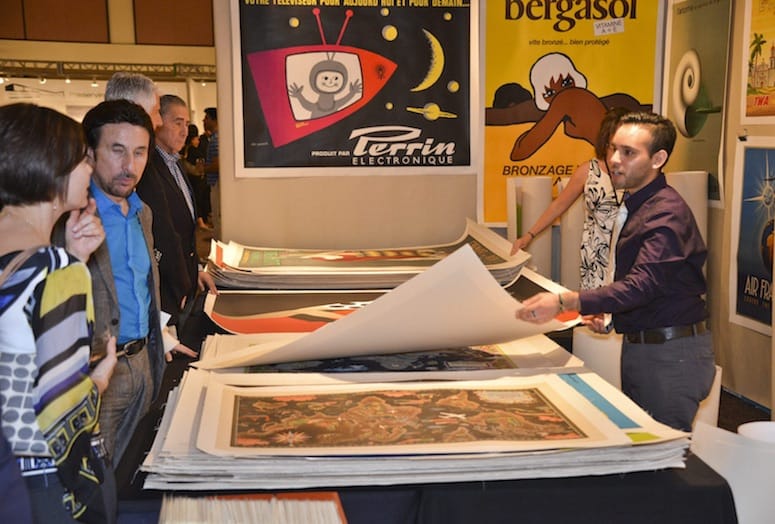 Only the string skills are serious at this show at the McCallum Theatre in Palm Desert. Poland-based quartet the MozART Group plays classical tunes with a comedic edge (think: playful props and sound effects Wolfgang Amadeus probably never intended). mccallumtheatre.com

Julliard-educated opera star Renée Fleming stands among musicians such as Aretha Franklin, Neil Diamond, Billy Joel, and Beyoncé as one of the artists to perform the national anthem at the Super Bowl (in fact, she’s the only classical singer ever to do so). Hear her soaring soprano at the McCallum Theatre. mccallumtheatre.com

Bruce Fessier reflects on his award-winning career spanning 40-years as a writer and editor for The Desert Sun. He bridges the view from the Rat Pack Era of the 1950s and ’60s when Palm Springs was a place where movie stars went to get away, with the current era of Palm Springs as a world class resort with international film and music festivals where celebrities now come to work. pshistoricalsociety.org 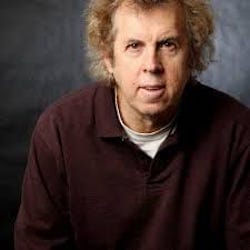 Art Palms Springs returns to the Palm Springs Convention Center for its ninth edition with an opening night preview on Feb. 13, and runs through Feb. 17. Art collector Jordan Schnitzer is being honored as 2020 Patron of the Year, while the 2020 Icon Award is going to Los Angeles-based painter, sculptor Chuck Arnoldi. art-palmsprings.com

This contemporary dance and circus company uses music and movement in addition to narration to draw McCallum Theatre audiences into a colorful love story set at an elegant hotel full of intriguing travelers and staff. mccallumtheatre.com

Every February, design buffs flock to the desert for a valley-wide celebration (think: tours, lectures, parties, and more) of all things midcentury modern.

One of the week’s most exciting events launches it: an out-of-this-world kickoff party playfully dubbed Space Modyssey. “We’re going to transform 20,000 square feet of space into an incredible environment that is intergalactic in nature,” says party planner Frank Goldstin. The theme was inspired by the affair’s location at the Palm Springs Air Museum, and the night’s entertainment — a David Bowie tribute extravaganza called Space Oddity — powers up the same retro-futurist aesthetic.

David Brighton, who plays Bowie, views Palm Springs as the perfect place to, well, space out. “Something about UFOs and the desert [seems] tied together,” he says. “And since it’s an artistic community, we will really be able to delve into [Bowie’s] artistry.”

• READ NEXT: David Brighton Reveals How He Cha-Cha-Changed Into David Bowie.

Golstin encourages attendees to dress a little starry themselves. “It’s an incredible, immersive experience,” he says. “You’ll find that many people come attired towards the theme. It brings a great deal of excitement to the evening — [which is] designed to surprise and delight you at every step.” modernismweek.com

Run away with the circus, for two unforgettable hours of nonstop action, thrills, excitement and adventure. Circus Vargas presents their new 2020 production “Mr. V’s Big Top Dream!”, a tribute to the man himself, the late Mr. Vargas. circusvargas.com

Other than his own home, this is Albert Frey’s most intact residential work. It was commissioned by a prominent desert family at a time when little if anything had been built nearby. Since the early 1970s, it has been owned by a single family and thus, has quietly existed on its hilltop perch overlooking the desert floor, largely forgotten and rarely seen by the public. modernismweek.com 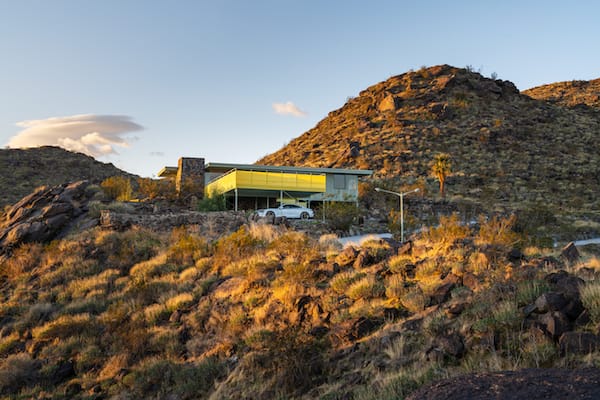 The “R” in R&B stands for romance with this triple-threat show at Agua Caliente Casino in Rancho Mirage. “Make It Last Forever” singer Keith Sweat, Grammy-winning quartet 112, and “Too Close” crooners Next serenade audiences with their sleekest love songs. aguacalientecasinos.com

One of Spotlight 29 Casino’s “Next Best Thing” tribute concert installments, this homage to Aretha Franklin celebrates the soulful hits of the Memphis-born icon who Rolling Stone declared the No. 1 greatest singer of all time. spotlight29.com

Show your love for nature at Santa Rosa & San Jacinto Mountains National Monument. Grab your bae and lace up your hiking boots for a guided Valentine’s Day trek complete with facts about local flora and fauna’s own ways of romancing. desertmountains.org

Actor-comedian Matt Rife headlines Valentine’s Day weekend at The Improv. The Ohio native began his stand-up career at age 15 and has since toured with some of the biggest names in comedy, including Dane Cook, Ralphie May, and Mike Epps. The Laugh Factory regular also appeared as a cast member on the seventh season of MTV’s “Wild N Out.” fantasyspringsresort.com

Modernism Show & Sale marks its 20th year featuring more than 90 premier national and international decorative and fine arts dealers with items representing all design movements, such as midcentury modern, of the 20th century and select 21st century items. Produced by Dolphin Promotions, which organizes antiques, art and design shows across the nation, last year’s Palm Springs event drew over 14,000 attendees. A special preview party on Feb. 14 offers a sneak peek before the show opens to the public. modernismweek.com.

Bob Anderson honors the American (and Palm Springs) icon known as Ol’ Blue Eyes. With expertly applied prosthetic makeup and a voice to please even the most ardent Sinatra fan, Anderson performs “Fly Me to the Moon,” “The Way You Look Tonight,” and more at the McCallum Theatre. mccallumtheatre.com 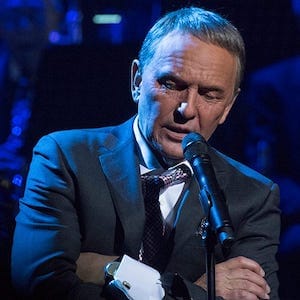 In 1975, a production of Jesus Christ Superstar brought together Chrissie Hammond, Russell Hitchcock, and Graham Russell — and a group of Australian Recording Industry Association hall-of-famers was born. Now a duo consisting of Hitchcock and Russell, the “Making Love Out of Nothing” singers play at the Agua Caliente Casino in Rancho Mirage. aguacalientecasinos.com

GROOVE: Concert Series on The Gardens on El Paseo / Feb. 15

The Gardens on El Paseo hosts the 22nd annual concert series every Saturday through March 15. The one-hour concerts take place on Saturday’s on the center lawn in front of Saks Fifth Avenue.Since the concerts inception, The Gardens has been able to help raise more than $1 million for those in need. thegardensonelpaseo.com

Help stomp out childhood cancer by putting your feet to the pavement in a 5K race at Rancho Mirage Community Park. The charity event also features vendors (including a food court to beat post-run munchies), entertainment, and a playzone for kids. desistrong.org

Cabaret performer Michael Griffiths wears many hats — a fact he proves with two tribute concerts to two different artists in a single day at the McCallum Theatre. Tune into Griffiths’ vibrant rendition of the ballads of Broadway songwriter Cole Griffiths, or watch him embody Madonna, sans costumes or gimmicks. mccallumtheatre.com

Old Jews Telling Jokes / Feb. 6 – March 15
Get ready for an outrageous evening of one-liners, double-entendres and hysterical routines. Created by Peter Gethers and Daniel Okrent, Old Jews Telling Jokes showcases five actors in a comedy that pays tribute to and reinvents classic jokes of the past and present. palmspringslife.com

Ballroom / Through Feb. 16
The Coachella Valley Repertory Theatre worked with Ballroom’s original authors to breathe new life — including three brand-new songs and several others that were previously cut before they reached the stage — into the 1976 Broadway musical about love at a dance hall. cvrep.org

Imaging Change: History, Memory, and Social Justice / Through April 5
Inspired by Dawoud Bey’s moving photographic series honoring and remembering the six children who were murdered by white supremacists in Birmingham, Alabama, on Sep. 15, 1963, this exhibition at the Palm Springs Art Museum features artists whose photos engage with the past, the contemporary moment, and the need for a different future. psmuseum.org

Jim Isermann, Copy. Pattern. Repeat. / Now Through Sept. 27
Jim Isermann, a longtime Palm Springs resident, has over many years built an artistic practice that encompasses painting, drawing, sculpture, site-specific installation, and product design. Pattern, color, geometry, and repetition are the cornerstones and the generators of his work in all mediums. psmuseum.org