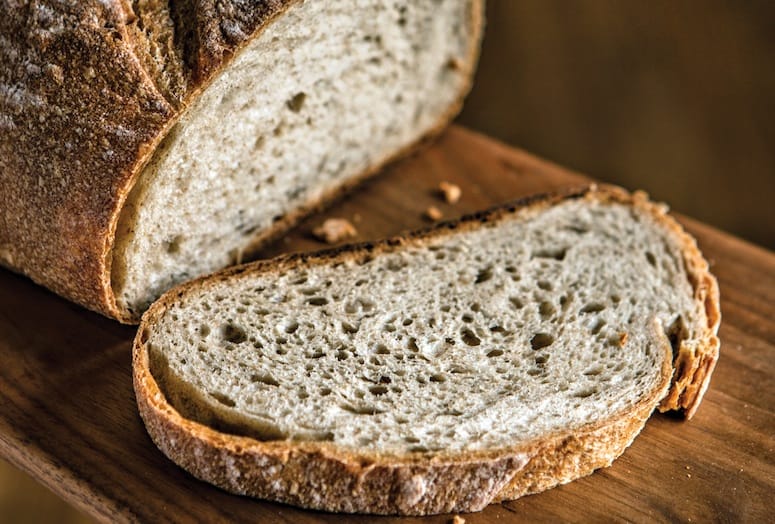 L’Artisan Valley Baking Company is obsessed with making sure every ingredient that goes into its European-style breads, from sea salt to high-end flours, is the best quality.
PHOTOS BY FREDRIK BRODÉN

The artisanal food and drink movement has been sweeping our foodie nation one hip-and-handmade product at a time — from bourbon-brined pickles in Brooklyn to Hatch chile hot sauce in Seattle. There’s a handful of artisans in and around the Coachella Valley crafting their own consumable creations, too, often selling at farmers’ markets and to local chefs looking to incorporate all-natural indie items into their offerings.

Talk for just a minute or two with Fred Estrada, co-founder of L’Artisan Valley Baking Company in Thousand Palms, and you’ll quickly realize that there’s bread and then there’s fresh European-style bread, the kind that’s created from scratch, painstakingly shaped by hand, and baked under the cover of darkness before being lovingly ferried to restaurant kitchens all over the valley each morning.

“The key is fresh ingredients,” says Estrada, who opened the company with business partner Severine Estrada 14 years ago after training with French master bakers in the Bay Area. “And we do everything from scratch.” That includes L’Artisan’s house-made starters, made with filtered water, high-end flours, sea salt, and that’s fermented to create an all-natural leavening agent. 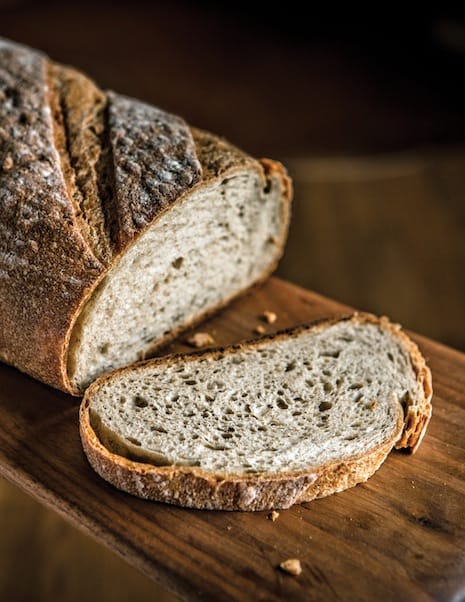 The result is a dizzying array of baked goods the business sells to local restaurants and hotels and at weekly farmers’ markets. The country French levain, a traditional bread made with whole wheat and rye flours, serves as a base for a variety of incarnations: One is baked with fresh rosemary and briny Kalamata olives; a walnut-date version uses local, organic fruit from Sun Date in Coachella; and a plain sliced levain was pretty much born to become a sandwich. Estrada says it’s one of the company’s best-sellers, along with L’Artisan’s glossy brioche. “You can do brioche with liquid eggs and food coloring or go the extra mile and use fresh eggs. It’s a little bit more expensive — well worth it for the flavor.” The rest of the roster reads like a carb-lover’s fantasy: baguettes, ciabatta, sourdough, focaccia, and perfectly Parisian croissants.

Order a burger at Arrive, a croissant at Ernest Coffee, or a side of toast at Cheeky’s and chances are you’ll end up biting into a L’Artisan creation. “A lot of chefs have been around to see what’s available out there and they don’t mind putting a high-end brioche hamburger bun or a loaf of levain on the menu. We get alot of customers who call us and say, ‘Oh we just ate here or there, can we come get some bread?’ That’s a big compliment.”

You might call Kurt Cyr a modern-day Renaissance man. He’s an interior designer, an architectural tour guide, a salon organizer, and a maker of whatever strikes his fancy, including, as of a couple years ago, that ubiquitous Palm Springs cocktail staple: gin. In true Cyr style, he stumbled upon juniper berries, the liquor’s core botanical, on the property of Makerville — an artists’ collective he co-founded at an old Elks Lodge up Highway 74 near Mountain Center — and decided to create what has now become his signature gin.

“The California juniper needs high elevations and we’re at 4,200 feet up there, so when I discovered the juniper, that was really the impetus. I thought ‘Well, I like gin,’ so I taught myself how to make it,” says Cyr, who gave himself a crash course through online research in addition to devouring boozy books like The Drunken Botanist.

Rather than distill from scratch, Cyr uses vodka as a base and carries out a multistep infusion process in small batches at his Palm Springs home. He steeps with ground coriander and juniper for a few days before filtering and then infuses the gin to create top notes that vary with the season — the zest of lemon or grapefruit along with star anise or cardamom in the spring and summer; orange in the autumn; and stronger flavors of allspice, clove, black pepper, and even pinecones around the holidays. Cyr also started aging the spirit in oak barrels to soften some of the liquor’s harsher notes. “I’m always mixing it up. I can have four different flavors going at a time,” he says. 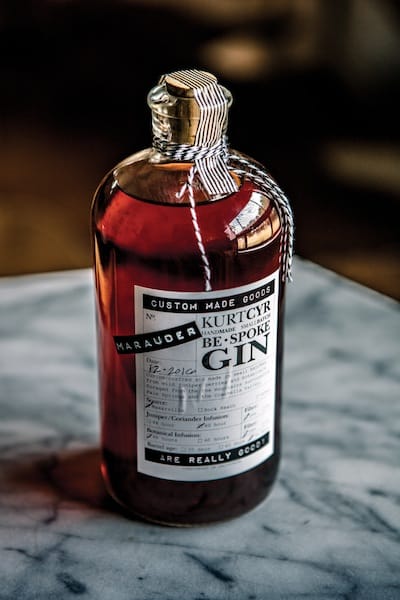 Kurt Cyr does not do anything by halves. From sourcing local juniper berries to creating the label, he has created a gin that is as much a beautiful object as it is a great drink.

Of course, the designer also gave plenty of thought to the product packaging and bottled his concoction in old apothecary bottles. He modeled the label after a vintage medicine bottle in a nod to one of gin’s American frontier uses as an ailment-treating elixir that was commonly available at pharmacies.

While Cyr doesn’t sell his booze, he serves it at his home, gives it as gifts, and shares his knowledge through hands-on gin-making workshops at Makerville. “I revolve around midcentury food, drink, and history, so this is kind of the evolution of that.”

It looks like Alison and Jay Carroll are living the dream. The East Coast natives moved to Joshua Tree from Los Angeles two years ago after falling in love with the High Desert. “We were attracted to the space to create, the ability to build our own home, the daily access to nature, and creative community,” Alison Carroll says.

The region has also become a home base to sell their own creation — the olive oil they produce in Northern California, blended with Taggiasca, Ascolano, Manzanilla, and Arbequina olives from Tehama County, an area that’s been flush with olive trees for a century. The project puts Alison Carroll’s experience as the former marketing director of the California Olive Oil Council to good use, and the result is an herbaceous, buttery olive oil named for the eclectic community not far from Twentynine Palms. It’s also home to the Carrolls’ seasonally operational flagship store, Wonder Valley, where they sell their oil along with olive oil–based skin care products (including a face oil they produce in the High Desert) and some groovy home goods.

This fall marks Wonder Valley Olive Oil’s fourth harvest. And while the Carrolls originally started with a 500-bottle production, they’ll clock in at close to 3,000 bottles this year, sold via Wonder Valley’s website, at their brick-and-mortar shop, and through indie retailers stretching from San Francisco to London. 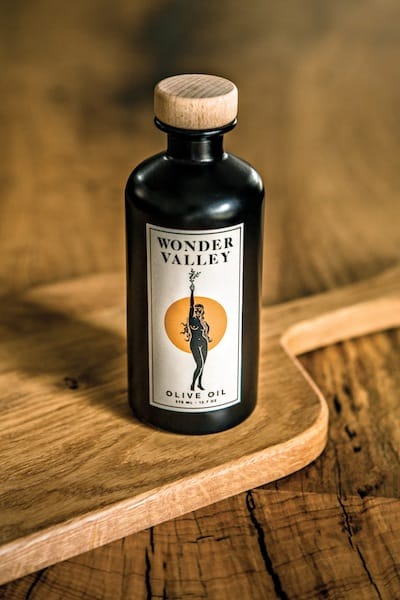 Perhaps the last place on earth you’d expect to find a  superior olive oil is in the High Desert, but the oil is crafted with just as much artistry as a painting or sculpture.

“I love this industry,” Alison Carroll says. “The farmers that are constantly raising the bar for best growing and harvesting practices and the millers who are untethered to old-world traditions can advance the science behind olive oil production.” Getting to do it here is simply a bonus. “There’s a limitless stretch of space here,” she says, “to think, dream, and create.”

When Patrick Evans, chief meteorologist for CBS Local 2, volunteered to be auctioned off as a private chef as part of a United Way charity event a few years back, he didn’t imagine it would put him on the path to a new business venture. “When I ended up cooking the dinner, someone said, ‘This is great sausage. Where did you get it?’ When I told them I’d made it, they said, ‘You can’t get Italian sausage like this on the West Coast. You’ve got to start marketing this.’ ”

The Virginia-born Evans was already familiar with the challenge of finding authentic Italian sausage in Southern California and had been kicking around the idea of selling sausages made from recipes his grandfather had brought over from Italy in the early 1900s, the same recipes that Evans (whose given last name is Iachetta), had made with his father, Fulvio.

After logging time in a test kitchen scaling the recipes, he rolled out two styles in 2013 with his dad’s blessing … and photo on every package. “When I showed him the label, the first thing he said is, ‘You’re going to owe me royalties on the picture,’ ” Evans says with a laugh. 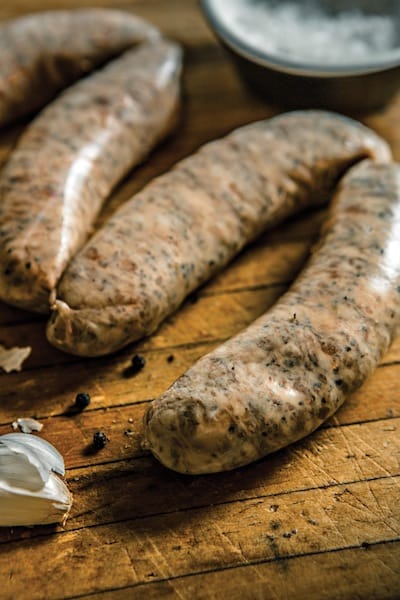 CBS Local 2 chief meteorologist Patrick Evans  never set out to be the valley’s sausage king, but  those who tried his granddad’s recipe insisted.

Fulvio’s produces the sausages in Fullerton using pork free of preservatives, hormones, and antibiotics. Evans makes a spicy version, which gets its heat from red pepper flakes, and a classic mild variety that still has a smidgeon of kick by way of black pepper. “It’s a very East Coast flavor profile with whole fennel seed, which really comes through,” says Evans. Area chefs have quickly found a plethora of uses for the sausage — tossing it with rigatoni and tomato sauce at Trio; sprinkling it on pizzas at The Slice; and smothering it with peppers and onions at Frankinbun.

Though Fulvio has since passed away, Evans’ tribute to him lives on. “The part that means the most to me is carrying on Pop’s legacy,” he says. “That’s very gratifying.”

If you’ve been buying commercial honey from the supermarket your whole life and aren’t quite sure what raw honey is, Shay Arviso — charged with farmers’ market sales for Temecula Valley Honey Company — understands your confusion. “I never knew the difference myself before I got involved,” she says. “And we still learn every day.”

Arviso began her education on raw honey, which comes straight from the beehive with no processing, more than a decade ago when her mom started using the stuff to relieve seasonal allergies. A quick primer: Some people believe that ingesting local honey, and thus local pollen, can build up immunity to the same local pollen that causes some allergies. Commercial brands, meanwhile, often undergo a high-heat pasteurization and filtration process that ends up stripping any pollen away.

A few years earlier, Arviso’s uncle, Dan Wardlaw, began producing his own honey from hives of Italian honeybees on a farm in Hemet and the experiment soon blossomed into a full-time business with 144 hives. 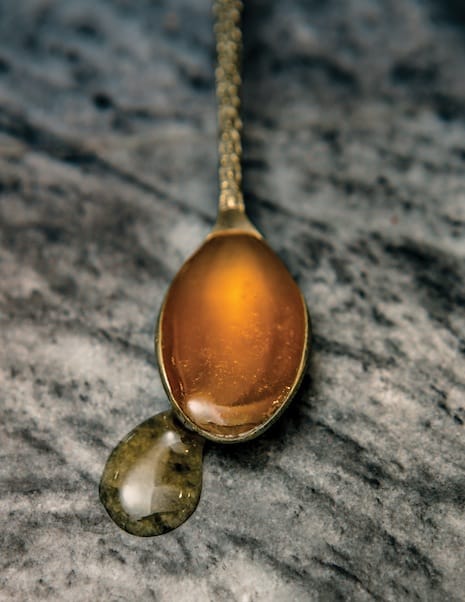 The difference between raw honey and the  commercial product found in most supermarkets is that the latter has undergone pasteurization and does  not contain the healthful qualities of the raw variety.

The company now sells an assortment of honeys at more than a dozen farmers’ markets around Southern California (including three in the Coachella Valley) as well as in health food stores. Each variety’s consistency, color, and taste can vary depending on the plant the bees pollinate. “Avocado is a creamier flavor, kind of a molasses; orange blossom has a light citrus taste; buckwheat is a stronger honey,” Arviso explains.

Temecula Valley Honey also sells flavored varieties of its popular wildflower-blossom honey — infusing them with aromatic ingredients like cinnamon, habanero, and, most recently, cabernet grapes — and also sells the straight pollen, which, according to Arviso, has become a hit with the farmers’ market set. “They love it because you get all the health benefits of honey without the sugar … and a little goes a long way.”