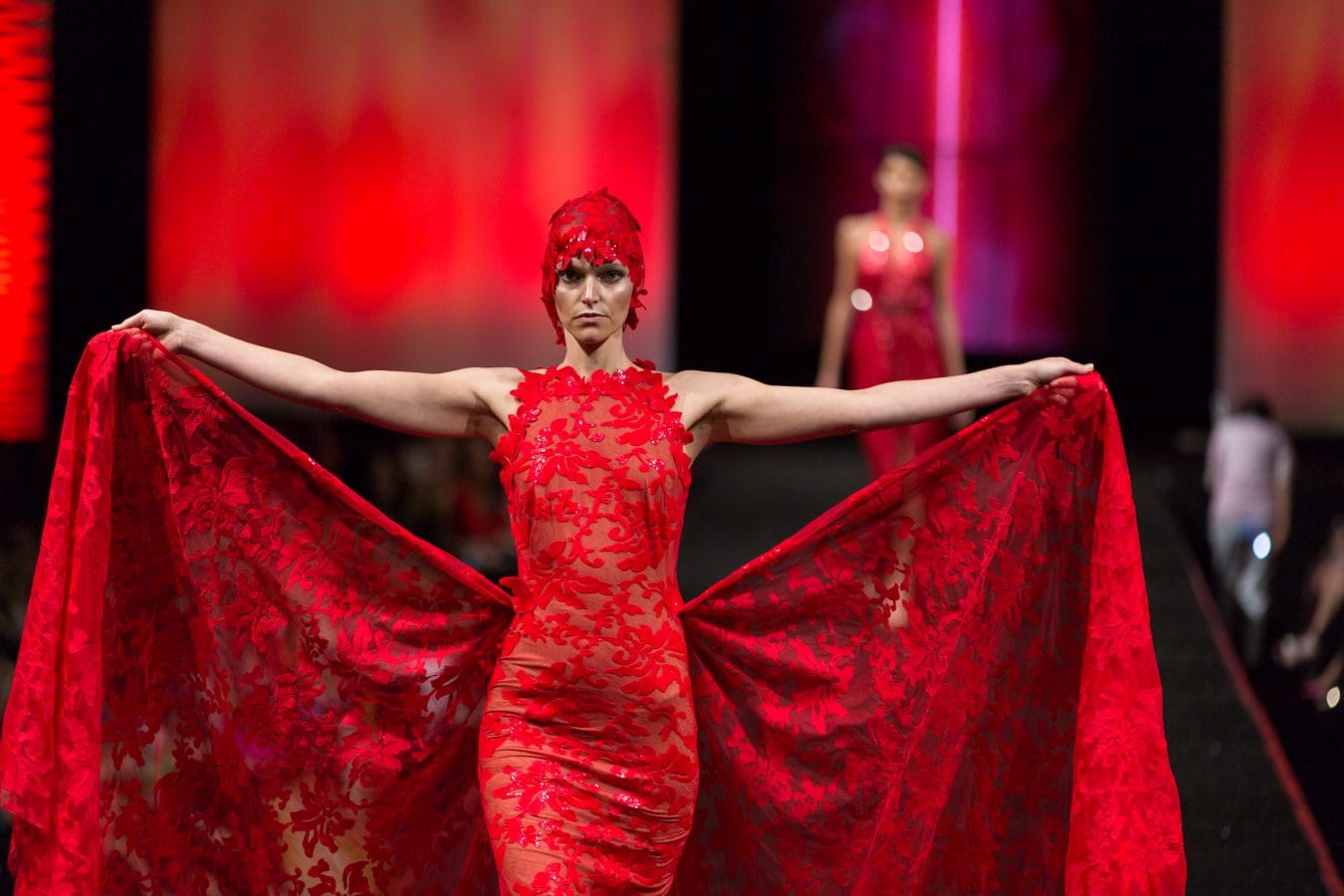 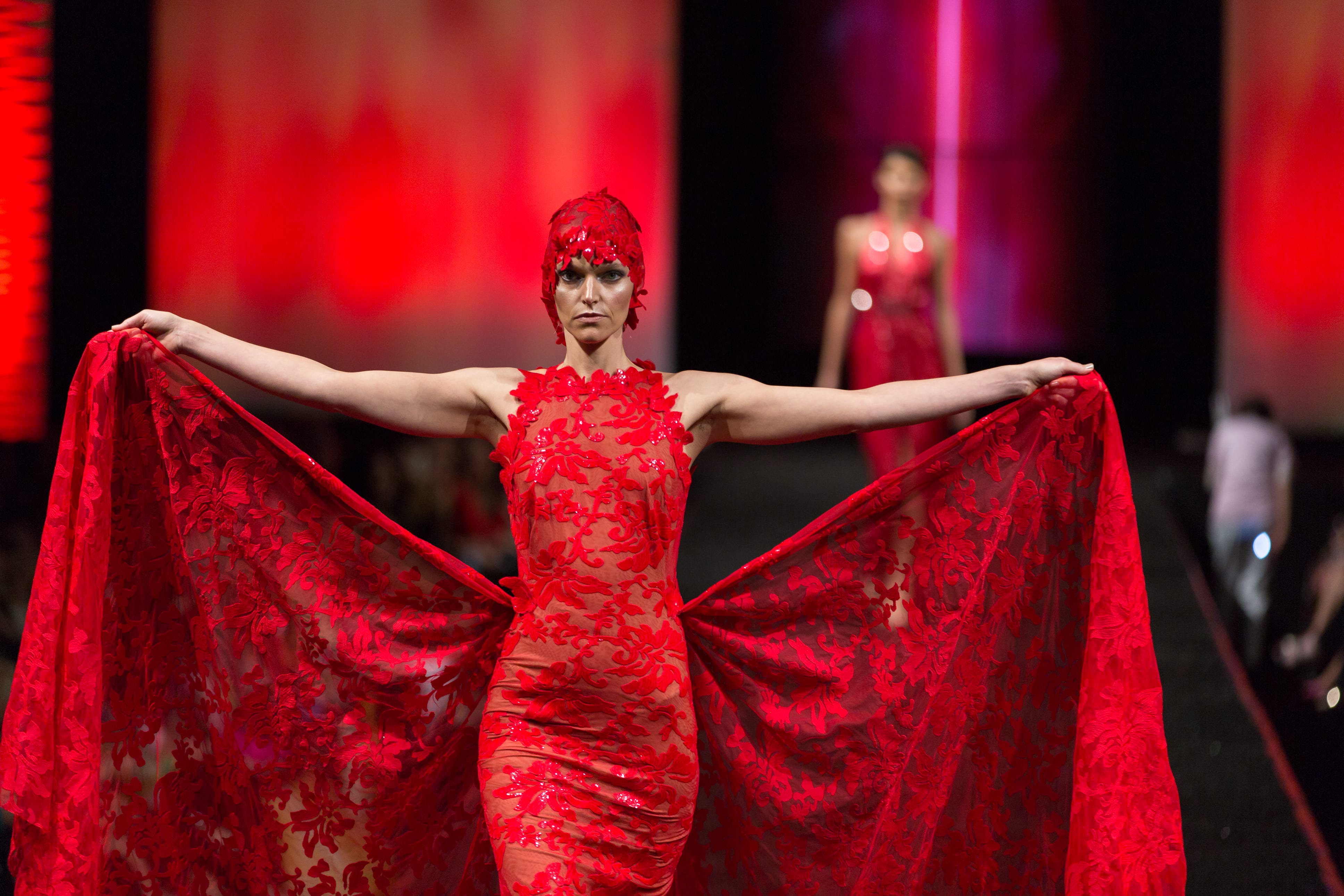 South African-born designer Marc Bouwer is synonymous with glamorous eveningwear for extraordinary occasions. This made him a fitting, so to speak, choice for the closing night of Fashion Week El Paseo on April 9. After seven previous nights celebrating fashion in its many forms, a sophisticated crowd had dressed the part and were fast to find their seats. None left disappointed.

Whenever a New York designer gets a grip on Fashion Week, the senses are heightened as mere clothes become couture. Even the runway seems a taller and longer. For the grand finale, the city lights of Bouwer’s Resort and Spring/Summer 2016 collections mesmerized with shifting sparkle and shine, like the Manhattan skyline after dark. As a child, Bouwer admired the women of Hollywood. He also must have enjoyed playing rock-paper-scissors. His timeless shapes are as solid as a rock, and he totes the credentials on paper to back them. Scissor-happy artistic cut-outs define his current looks. Bouwer turns out a fabulous dress then treats it like a folded-paper snowflake, snipping excess where most of us would have left a lovely garment well enough alone. When he steps back, each gown could have fallen from heaven. His missing pieces are his signature.

Goddesses and angels owned the runway in a deliberately serious show of transformative, high-fashion frockery. Red lace delicacies led to other lip-stain shades and jewel tones before launching into saturated summer hues. Black-tie black mixed with space-age gold and silver, punctuated by a riveting group of peachy nude and skin-tone formalwear. Bouwer’s floor-caressing dresses drape the form and loom larger than life: an ideal combination that appeals to the “strong, sexy women” for whom he crafts them. The flight of fanciness kept on coming. (Was the show restarting?) The sheer volume blew minds, augmented by dazzling detail work that could have employed half the garment district. A single dress would prove a lifetime achievement for a lesser name.

It’s near impossible to believe that not long ago (in the grungy 1990s) a young Bouwer was piecing together his business out of a Greenwich Village apartment on the coattails of his apprenticeship with Roy Halston. A perfectionist’s designer, Bouwer now fills his client list with Type A overachievers of the entertainment world. His styles hide every flaw, dressing them for destiny from the red carpet to the wedding aisle. The adventure pressed on in spiky sculpted shoulders, a green dress with a swishing tail, and crystal accents on plunging necklines. Attendees burst into applause at the sight of a seraph in gold pants and teal wings. How can a strapless dress also be backless? Only Bouwer has that answer.

A sequence of ornamental headpieces gave the body-confident finale its crowning touch, adding a masquerade affect to Bouwer’s ball. Jeweled crowns and a cut-out cap joined a black boomerang on a headband and sequined ears of animals unknown. Perhaps these promoted the animalistic nature of women, or simply honored cruelty-free collections by a designer who has won PETA’s heart. For the final act, a “model train” in statuesque white gowns lined the runway on both sides. This sent Bouwer out from backstage for a bow. He dipped low and dramatically, with a nod, kiss, and smile to an adoring fan base.

Any and all personal cravings that prompt us to primp and flee to a fashion show — artistry, fantasy, trend-stalking, performance, party, people-watching, style inspiration, wish-listing, or the impulse to drop into a world we normally watch from afar — were sated like a 12-course meal.

Bouwer’s traditionally attractive gowns, paired with an electronic soundtrack and bedazzled headpieces, left many guests longing to own a closetful, along with the invitations to justify it.

In a flash of fabrics, FWEP has left us until next year. This sensational send-off should help weather the wait.