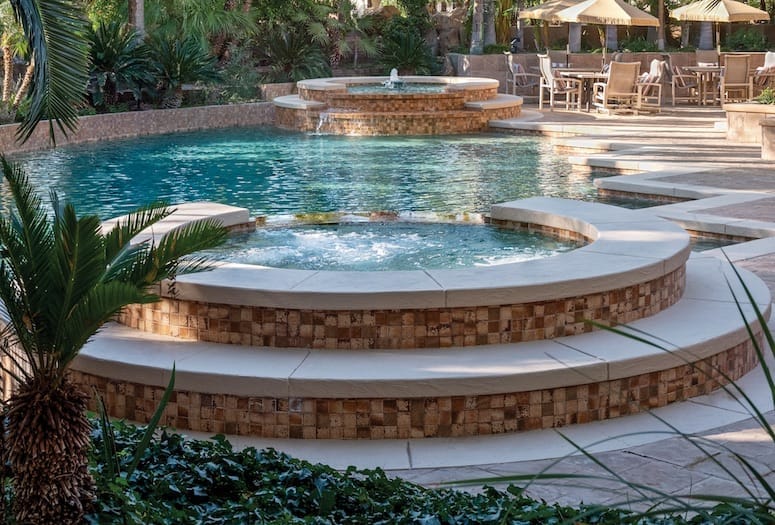 A bit of Kauai in the desert, this storied pool in Rancho Mirage finds a private green shelter in the shading palms and mature vegetation.
PHOTOGRAPHY BY MILLICENT HARVEY

If the stats are correct, there’s a swimming pool for every person in Greater Palm Springs. This one in Rancho Mirage happens to be part of a three-home compound on 2.4 acres where sunken tennis courts, a two-hole golf course, and lakes with rock waterfalls comprise “the backyard.”

Shading the pool is a lush, Hawaiian-style paradise of assorted palms, old growth trees, and leafy birds of paradise. They create a swimming enclave that is 10 degrees cooler than the rest of the desert. The staggered edge along one side mirrors the stairstep glass wall of the great room, a flourish likely noted when the home received a Golden Nugget Award in 1996.

Past real estate listings have disclosed that this “jewel of Clancy Lane” in The Renaissance community is well known among Hollywood celebrities, presidents, and political dignitaries invited by at least one of its billionaire owners.

Richard Clark, owner of Canyon Pools in Palm Desert since 1975, recalls remodeling the exterior in the mid-1990s, when former Porcupine Creek owner and timber baron Tim Blixseth counted this among his homes.

Clark installed the lakes and rock waterfalls, added a waterfall fountain to the pool, and built a massive fire-and-water feature to create a grander entrance, all based on Blixseth’s own 3-D drawings.

“He wanted everything to be very overgrown, lush, and heavy,” says Clark, who also worked with Blixseth on Porcupine Creek and built “infinity pools hanging off the edge of a cliff” for him in Montana. “Everything that was done was overdone. He never spared any expense. His daughter was married on the property in a huge wedding with the Palm Desert Symphony, and the tennis courts turned into a restaurant.”

Guests over the years must have appreciated the privacy all the tropical vegetation provided around the pool and elsewhere. With the conversations that might have unfolded here, who needs island time? 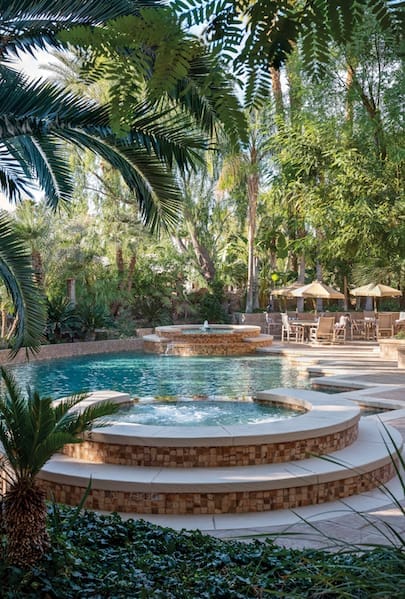