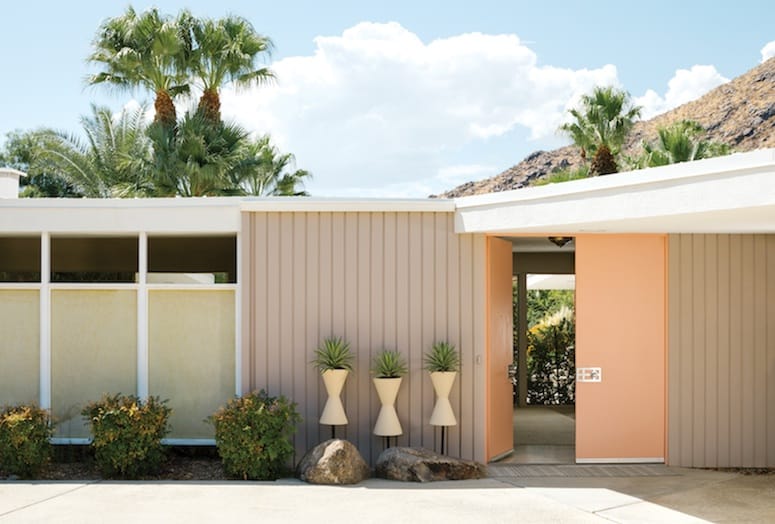 Fiberglass privacy screens and three floating architectural pottery planters across the home’s facade allude to many original details inside. Reid color-matched the paint for the front doors to the original hue from 1957.
PHOTOS BY LANCE GERBER

Homes seemingly untouched by the passing of time and the erratic fads that go with it have become a lean niche market, and that market has its own nickname. “Time capsule” properties may not appeal to the average buyer, but others make it a point to seek them out. Sellers are often willing to wait for an educated offer from a purist who understands the home’s true soul rather than accept one from a random shopper who dares to utter the words “gut job” or “granite countertops.”

The late Jim Reid never set out to find a time capsule when the Canadian native added “buy desert property” to his bucket list. He enjoyed it for nearly 20 years before he passed away earlier this fall. The Laufer residence had been donated to a local synagogue after its owners had passed away. Having admired the home from the street, Reid stepped inside in 1998, made an offer, and couldn’t bear to tamper with its original state.

The synagogue staff had planned to clean out the house before it changed hands. Reid asked them to leave it. “I really haven’t disturbed anything,” he said. The previous owners’ poker chips sat in the den with their personal diaries. Several dresses hung suspended in time in the entry hall closet. “When I walked in the door, I felt that I was in a special place and I shouldn’t really touch things, let alone simply dispose of them.”

In Old Las Palmas, Reid’s time capsule explored the softer side of 1957 through a thoughtful restoration and a serene environment that never second-guessed the architect’s intentions. That architect was unknown to Reid when he purchased, but the house was regarded as one of the first projects by noted interior designer Arthur Elrod.

Reid received a preservation award from the Palm Springs Modern Committee in 2013. We spoke to him over the summer to learn more about the mind behind the capsule:

Why this house?
It called to me from the street with its three dancing-lady urns and the simplicity and the elegance of the facade. I was driving by on a tour of midcentury houses with my Realtor, Charles Long. I asked him to back up the car. It wasn’t for sale. The pool was surrounded by chain-link fence. The back was an overgrown cactus garden. It was just a mess. Everything was in disrepair, but I saw through it. I said, “Charles, if this comes on the market, call me.” 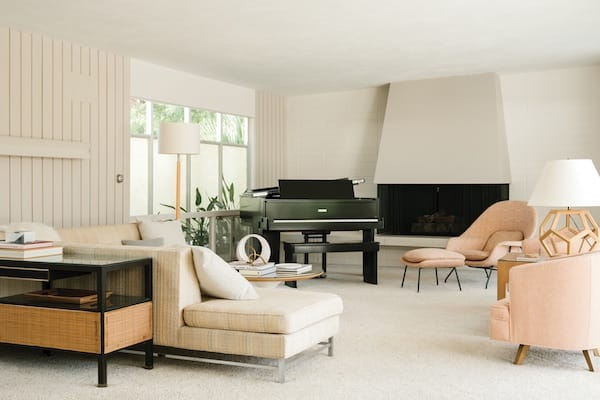 Furnishings by Arthur Elrod, with tags to prove it, surround the Steinway black piano by Walter Dorwin Teague. “It’s really a special piece of furniture, as well as a peformance piece,”  said Reid.

You finally get inside and it’s all original?
Yes. And I knew I wanted to restore and keep it the same, as close to 1957 as possible. I could have built an 8,000-square-foot add-on to the original house because of the size of the lot. I could have done a quadrangle with a pool in the middle. But I decided not to on aesthetic grounds. After I bought it, I went around the world. I thought about the property. I didn’t want to screw it up. And I don’t think I did.

Actually, I did not know the name “Arthur Elrod” until I bought my house. Then friends came over and said, “Oh my God! This is the Arthur Elrod house!” I was influenced by people who knew how important Arthur Elrod was. During a tour the [Palm Springs Art] museum had, a woman came through and said, “I was his assistant when he did this house. I can’t believe the drapes are still here.”

Clearly you’re meticulous and preserved important details.
For you, what does it mean to take on an authentic restoration?
I’ve been through some very ugly restorations. They’re called renovations. In Toronto and Chicago, I’ve restored theaters. I think “restoration” means you’re back.

The fiberglass screens across the front were originally framed in wood, which had deteriorated. I couldn’t replace them; that product does not exist. I searched and searched and searched. So I had them taken down and hand-cleaned. I had the trim re-created in powder-coated steel, same dimensions, and mounted it back in.

Beyond that, I started from the top down — new roof, insulation, plumbing, wiring; all the guts were redone. The plumbing was done entirely through the walls, not the cheap way across the roof. That’s why the blue bathroom still has the original foil wallpaper on the walls in perfect condition.

I didn’t touch the kitchen. Curbed L.A. gave me the greatest compliment when they said the whole kitchen should be rolled up and sent to a museum.

So you restored the inside and reinvented the outside. What did you add?
Out the kitchen door is the new outdoor kitchen and dining. I dynamited the pool, but saved the original curved coping at the edge of the pool. It’s now a black-bottom pool with Pebble Tec. The landscaping was my greatest joy. Today there is a mature citrus grove, 70-foot-long bougainvillea arbor, mature palm trees, a cactus garden, a secret garden, a rose garden with 40 tea roses all different colors, a croquet court, and an outdoor living area that really lights up pretty at night. There’s a stage for charity events with plugs in the back for microphones and speakers. That there is a new vision of what you can do with dirt in Palm Springs.

In building the guesthouse, I took elements from the main house and tried to flatter Arthur Elrod. I did all the floors terrazzo — in the main house it is in the foyer and dining room. I took the beautiful hearth from the living room and did a mini one in the bedroom. So the restored original and new construction that feels like it’s always been there are on the same property.

How did you choose furnishings where there were none?
I gathered from the footprints. When I got the house, the bed was missing; the dining room table was missing. I knew the coffee table would have been a Noguchi because there were three points of indentation in the carpet. When I put in the Saarinen dining table and chairs, my gardener, whom I inherited with the property, was watering a bush and dropped the hose when he saw it. I went out and said, “Albert, what’s wrong?” He said, “That’s Mrs. Laufer’s table!” Intuitively I put the same table back in the same space. Let’s face it. What else could fit there? Some of it was intuitive, some of it was logical, some was just plain having fun.

You love the way the house and new guesthouse are sited.
Other favorite aspects?
The wall-to-wall dresser in the master bedroom is a treat to wake up to. It just is so simple and so sleek. Everything’s fitted with compartments. Everything is designed. Those wonderful knobs with the mosaic marble. It’s Arthur Elrod’s genius. Remember, this house is 1957, not ’67, and he had Lucite pulls everywhere. That was way ahead of the curve. I like his detail. The wall-hung buffet in the dining room is teak and the inlays are plastic laminate. Practical, and new then in 1957. His use of expensive and inexpensive materials is brilliant. And of course, the architectural pottery urns — I call them “the dancing ladies” because that’s what they do up on those little pedestals. The house is famous because of them.

And you’re happy with it as a time capsule?
I’m very proud of what I’ve done. The essence of the house is the same except I’ve taken it up to current need. It may be a little unpolished, but it still says 1957, not 2017. If the Laufers were to walk through the front door right now, down to the colors it would be the same house for them.

Ric Harrison in the Den

“Diaries are a window into early life in Palm Springs,” says Chris Menrad, friend of and real estate agent for the late Jim Reid and president of the Palm Springs Modern Committee. When Menrad learned that Reid never tossed the homeowners’ handwritten annual tomes that stretch from 1929 to 1989, he sensed they might reveal the home’s mysterious architect.

“I hung up the phone with Jim at 9 at night and ran over there,” Menrad recalls. “Jim never wanted to poke his nose in their business, but I sat there for a couple hours reading. It was kind of chilling. Like, what if Mrs. Laufer’s ghost was watching me?”

Menrad learned the Laufers retired and moved from Buffalo, New York, and lived in Palm Springs nearly full-time. The pages log movie theater jaunts to catch the latest films, bridge games, dinner with the mayor, and parties with burgeoning socialites, among mundane haircuts and washings, the date they stopped smoking, and the couple’s poker winnings and losses tallied at year’s end. 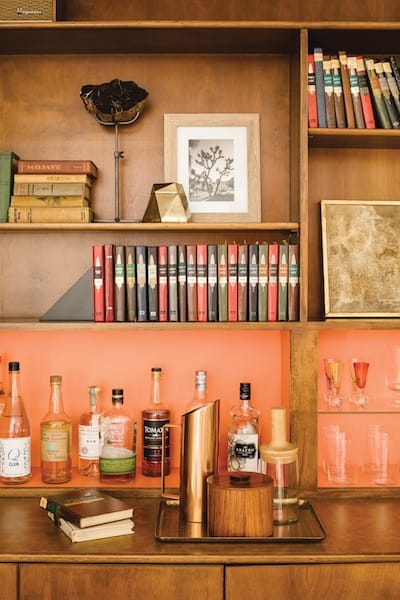 There among appointments with designer Arthur Elrod are meetings with architects Donald Wexler and Richard Harrison of the firm Wexler & Harrison. In speaking with both men’s descendants, Menrad pieced it together: The home was designed by Harrison, who earned a star on the Palm Springs Walk of Fame in 2016. PS ModCom gave Reid a preservation award years before the home had this pedigree. Now it does.