EVEN AS THE VALLEY IS BESIEGED BY AVID FANS OF MODERNISM, A SURPRISING NUMBER OF THE OBJECTS OF THEIR DESIRE ARE ENDANGERED. 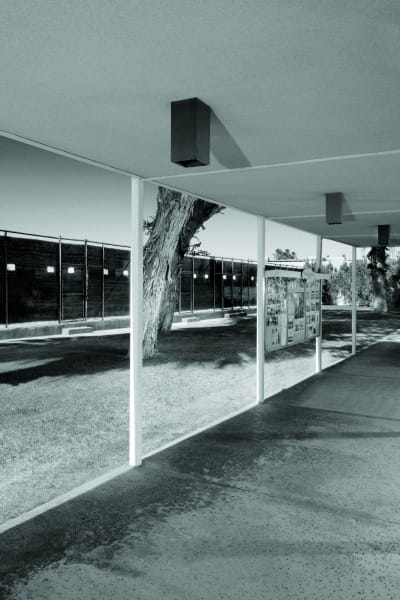 The closure of the Plaza Racquet Club is emblematic of the structural losses that gut the charm of Palm Springs. 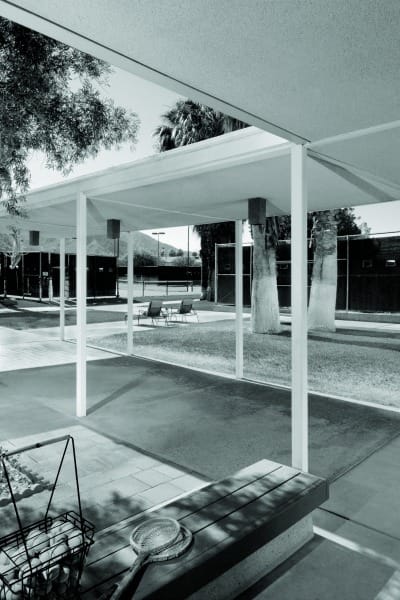 Architect: Laszlo Sandor
Year Built: 1975. More than a tennis pavilion, it was a community center for everyone in Palm Springs who loved the game.
Year Destroyed: Closed in 2016; awaiting demolition.

Monte Carlos, Corvettes, and Eldorados cruise down Palm Canyon Drive. There’s the Canyon Club Inn, where celebrities hang out, the bustling Chi Chi Club that dazzles from inside and out, and Huddle’s Springs restaurant, a renowned example of Googie-style architecture by William F. Cody. Department stores, like J.W. Robinson and Bullock’s, are posh and prosperous.

Stop at a brand-new restaurant called Billy Reed’s for a cup of joe and a slice of pie, and settle in with the local paper. An ad in the sports section proclaims, “Meet your perfect tennis partner!” Read the small print and it’s about a newfangled automatic tennis ball machine to help players warm up and improve their swings. But the advertisement, like all advertisements, alludes to something more grandiose: Develop a perfect game. Meet like-minded people. Find yourself at the Plaza Racquet Club on East Baristo Road.

While the city still boasts many midcentury gems, it has lost the brilliant assemblage you just witnessed. The Chi Chi Club wheezed slowly to death, devolving into a scrappy discotheque before being torn down in 1977. The Canyon Club Inn was demolished in the 1990s for a project that was never developed. Huddle’s Springs is now an empty lot. Bullock’s was razed and replaced with small shops in the Spanish Colonial Revival style.

Now the Plaza Racquet Club is scheduled for demolition. The Palm Springs Unified School District determined it to be excess land and put it up for sale. A Newport Beach–based developer initially nabbed it for $8.5 million with plans to bulldoze the club and build condos, but the sale fell through for unknown reasons. The club closed its doors in mid-2016.

It’s an unremarkable end for a place that added to the city’s character and cultivated an atmosphere where people — residents and snowbirds alike — felt they were part of something special.

“When you tell people you belong to a tennis club, it conjures up something exclusive, but it was so not that,” says Mimi Fisher, a member for nine seasons until the recent closure. “There were the wealthy people, sure, but there were also the everyday people. There were millionaires and blue-collar workers playing side by side. It drew a wide swath of the community.”

Plaza Racquet Club first opened in 1975, featuring nine pristine courts, 10 practice alleys, and a pro shop. It’s located on 8.4 acres, leased by the city from the school district, in a pocket of Palm Springs that doesn’t get much wind, which made it terrific for tennis.

The public club could never be considered a modernist showstopper, but the structure in its entirety is architecturally interesting. The lines are simple but strong, reminiscent of Cody, which is why it is often mistaken for one of his designs.

Plaza Racquet Club was actually the work of Hungarian-born Laszlo Sandor, one of Palm Springs’ lesser-known architects, who apprenticed and worked with Cody before flying solo. (Sandor also designed homes throughout the Coachella Valley as well as the Seventh Day Adventist Church at Ramon Road and Sunrise Way, with stacked concrete blocks punctuated by recessed clerestory windows that are more evocative of brutalism than of traditional modernist design.)

“Cody’s influence, as well as that of Donald Wexler, was certainly apparent in the clubhouse design,” says Jade Thomas Nelson, a Palm Springs native and owner of P.S. Walk With Me walking tours.

Many people passed by the club without fanfare, but photographer Dan Chavkin took notice. In 2008, Chavkin began shooting some of Palm Springs’ unknown midcentury structures, a collection that became his coffee-table book, Unseen Midcentury Desert Modern. Many of the buildings showcased in the book are either not accessible to the public, like midcentury jewels that sparkle behind the walls of private country clubs and gated communities, or are hidden in plain sight, like the Plaza Racquet Club.

“As soon as I saw the club, I wanted to photograph it for my Unseen book, because it was a perfect candidate for it,” says the former celebrity photographer, who moved to Palm Springs from L.A. after falling in love with the local architecture. He first noticed the club on a drive through its neighborhood. “It’s under the radar and most people don’t know about it. They don’t know it’s an interesting structure because they’ve never really looked at it. But I knew it was something significant.”

Over the years, the club gained hundreds of members and hosted scores of events, like the nation’s first same-gender couples’ doubles tournament to be sanctioned by the U.S. Tennis Association. Thousands more were drawn to the club’s other major tournaments every year.

“What made [the club] distinctive was that it was created for the public when tennis was immensely popular here,” Nelson says. “And it continued to provide a venue for tennis players in a town where golf became the name of the game.”

To be clear, Plaza Racquet Club was never simply a place for tennis.

“Everyone who was a member there felt like it was a community center in addition to a tennis club,” Fisher recalls. “It provided social contacts and entertainment. It was a place for friendship and families. It felt like home.

“I know people who continued coming to the club, even after they couldn’t physically play anymore. It was that kind of place.”

When the city pushed for protection based on historic and cultural merits, which could have preserved the site, the school district pushed back and threatened to sue. Maybe district officials didn’t realize what the community would be losing.

“I think the main reason so many wanted to save it was due to its standing as an accessible community tennis club that was well-located, well-managed, and well-maintained,” Nelson says. “It didn’t hurt that the unique clubhouse was a nicely designed example of the midcentury vernacular by a lesser-known.”

After the club closed and members scattered to courts at country clubs and public parks around the valley, the property fell out of escrow. It now sits unused and shuttered. 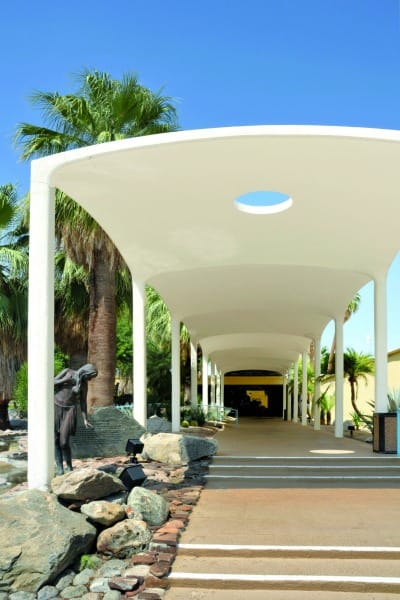 Architect: William Cody, Donald Wexler, Richard Harrison, and Phillip Koenig
Year Built: 1959 to 1963. The famous cannonade was the first piece of this building to fall despite more than 1,000 letters supporting its preservation.
Year Destroyed: 2014 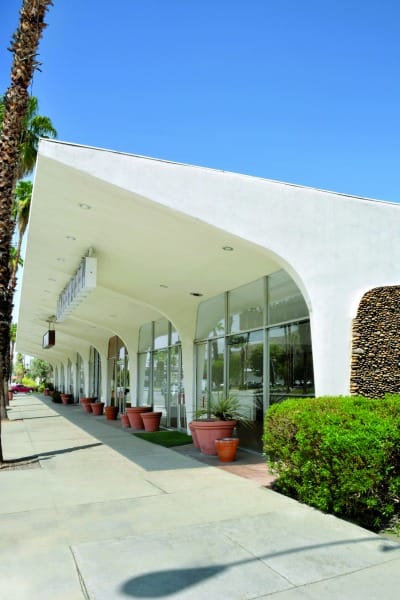 Architect: Donald Wexler and Richard Harrison
Year Built: 1956. When this commercial building was demolished by its owners, at least six small business were forced to relocate.
Year Destroyed: 2015

The closure of the Plaza Racquet Club is emblematic of the structural losses that gut the charm of Palm Springs, explains Erik Rosenow, president of the Palm Springs Preservation Foundation.

“On the one hand you have Modernism Week, which celebrates our architecture and everything that makes our city special,” he says.

“On the other hand, you have people who don’t care if a building is destroyed because it’s old or it’s funny looking or whatever.”

The two groups are an interesting juxtaposition — those who glorify the past without understanding the future, and others who look to the future while disregarding the significance of the past. But it’s possible to find common ground, and other cities have proven it with the steps they have taken to protect the places that matter.

For instance, the Los Angeles County Museum of Art recently acquired the Sheats/Goldstein residence, a dramatic 1963 John Lautner–designed home that was immortalized in The Big Lebowski. Located on a hillside just north of Beverly Hills, the distinctly Angeleno residence will now be preserved and used for museum tours, fundraisers, exhibitions, and other events.

Similarly, advocates for local preservation say there are ways to salvage old buildings, simultaneously preserving the bones that infuse Palm Springs with character while continuing to make progress and cultivate new business. Think about the J.W. Robinson Department Store building at South Palm Canyon Drive and West Baristo Avenue. The pavilion-style modernist building is a masterpiece of glass and metal, with large glass front walls and steep, serrated overhangs. Though the department store is long gone (it has a number of tenants including a book store and a home goods store), the site’s latest tenant is BevMo!, the wine and liquor retailer.

Preservationists also hail the Palm Springs Art Museum Architecture and Design Center, Edwards Harris Pavilion (also located at South Palm Canyon Drive and West Baristo Avenue in downtown Palm Springs) as another example of how new life can be breathed into an old framework. The building is a classic midcentury international-style structure, designed by E. Stewart Williams as the Santa Fe Federal Savings and Loan in 1961. The building eventually received Class 1 Historic Site protective status after changing hands several times. The museum purchased the building in 2011, and the rehabilitation was overseen by Marmol Radziner, a Los Angeles–based architecture firm known for the restoration of other Palm Springs gems, like the Kaufmann House and the Ship of the Desert residence.

Though the 13,000-square-foot Williams structure retains many original elements, like a glass pavilion with floor-to-ceiling windows, it’s clearly not a bank anymore. Rather, it’s a bright and seamless gallery space for exhibitions devoted to architecture and design. At this point, it’s hard to imagine the building was ever anything as pedestrian as a savings and loan institution.

One site that deserves a creative path forward is downtown’s Town & Country Center, a mixed-use development designed by Paul R. Williams and A. Quincy Jones in 1948 in the international style of Southern California architecture. Class 1 Historic Site designation of the Town & Country Center was first recommended to the city in 2009, but the center’s next incarnation has been the subject of years-long, contentious debate and controversy. Most recently, the historic designation was approved, and the developer agreed to move toward adaptive reuse rather than demolition.

However, the empty center, populated by transients and without regular maintenance, is primed for what Rosenow calls “demolition by neglect.”

The Community Church of Palm Springs, the Carnell Building, and the Clara Bee Lodge on Ramon Road were all gutted by fire in recent years. Whether intentional or accidental, it’s a fate that often befalls neglected structures.

On the other hand, with proper restoration, the center could be a boon to the city. The buildings could once again be hubs of activity. Buildings are meant be animated by people. They are living memorials that curate a sense of place. They are more than the materials that construct them.

“Historic preservation has revitalized downtowns all over the world,” Rosenow says. “It’s not a crazy idea.”

Rosenow likens Palm Springs to any number of small towns in Europe that have maintained Old World charm and continue to attract tourists because of it. These are places that brim with promise and possibility while offering a nod to history.

“Just because something is only 50 years old, that doesn’t mean it’s insignificant,” he says. “This stuff needs to be preserved for later generations to enjoy.”

This city is, after all, a hub of modernist design and home to Palm Springs Modernism Week, which draws modernistas from around the globe. Last year’s 11-day festival attracted more than 77,500 people and brought in almost $29 million for the local economy. This year’s event promises to break those records.

It’s proof that people out there want what Palm Springs offers.

“Millions of modernists can’t be wrong,” Rosenow says with a smile. 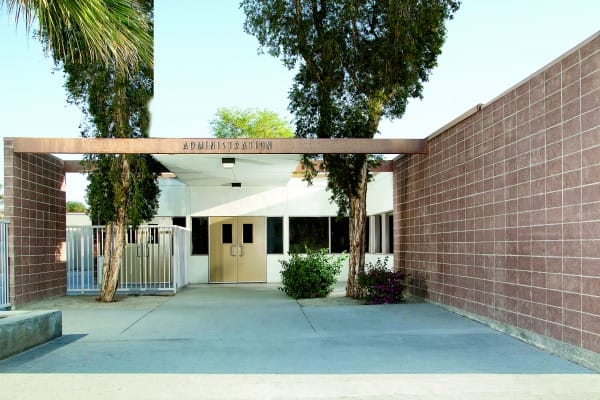 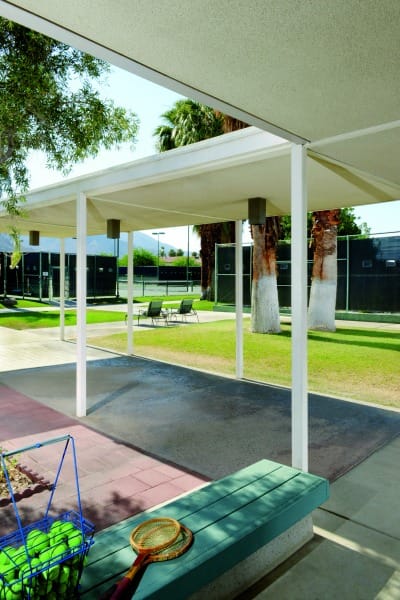 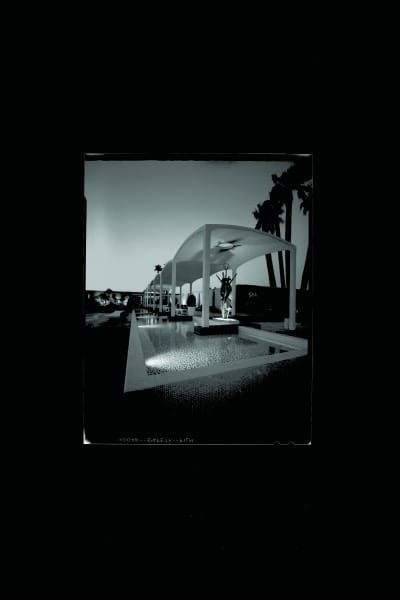 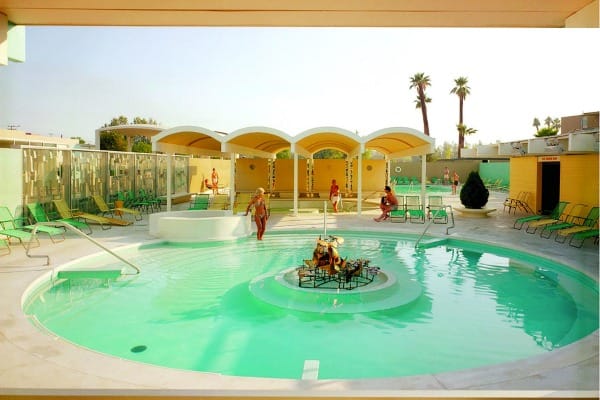