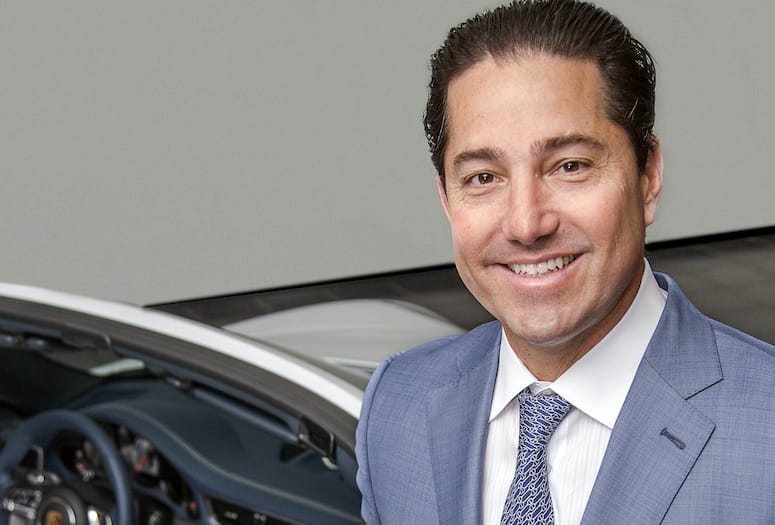 Todd Blue, CEO, founder and dealer principal at indiGO Auto Group in Rancho Mirage and Palm Springs has been nominated for the 2019 Time Magazine Dealer of the Year award.

Blue is one of a select group of 51 dealer nominees from across the country who will be honored at the 102nd annual National Automobile Dealers Association (NADA) Show Jan. 25 in San Francisco.

Blue was nominated by Brian Maas, president of the California New Car Dealers Association. Todd and his wife, Karen, have three children.

The Time Magazine Dealer of the Year award is one of the automobile industry’s most prestigious and highly coveted honors. Recipients are among the nation’s most successful auto dealers who also demonstrate a long-standing commitment to community service. Blue, 49, was chosen to represent the California New Car Dealers Association in the national competition – one of only 51 auto dealers nominated for the 50th annual award from more than 16,000 nationwide.

“Being in the automotive industry was a childhood dream of mine,” Blue said. “More than any industry acknowledgement or single moment, it is incredibly rewarding for me to love what I do every day.”

For someone who did not grow up in the industry, Blue, who always loved sports cars, had an unusual fascination with the automobile industry. During an entrepreneurship class in college, he created an in-depth business plan for the mock-opening of an Infiniti store, even contacting the carmaker for support materials. After this classroom “simulation,” it would take Blue almost two decades to circle back to the retail automotive industry after his graduation from George Washington University where he earned a bachelor’s degree in international business.

After working in metals trading in Chicago for almost three years, following his graduation in 1992, Blue joined his family’s business in Kentucky in 1994. After acquiring that business from his father and significantly growing revenues, he and his brother eventually sold it in 1998. Blue then co-founded Cobalt Ventures and began investing in real estate, financial services, restaurants and other projects. 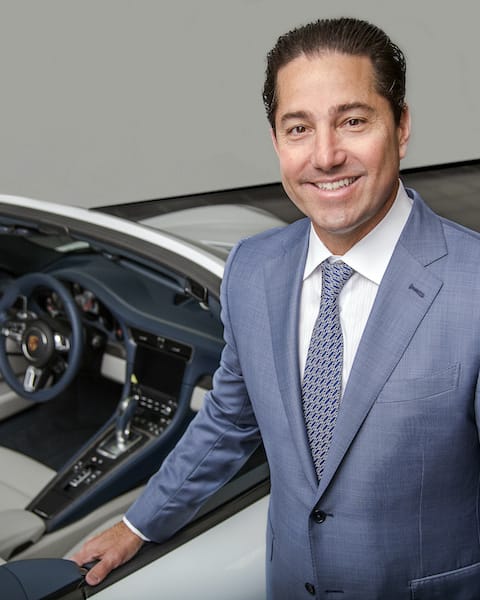 Blue started collecting classic cars in 2006, learning from top collector Jim Patterson and eventually turned that passion into his own company, indiGO Classic Cars. In 2009, Blue was approached to purchase Porsche of North Houston in Texas.

“Porsche has always been one of the world’s greatest brands, so this was an opportunity I couldn’t pass up,” Blue said. “I was so excited to live my dream, I did not realize the guts it took to start a dealership group during the Great Recession.”

He added, “But the stars seemed to align. We had a terrific location and the fact that it was a single-point Porsche store gave me the opportunity to focus and learn the business. It allowed me to do everything right, from a customer service perspective, which was my number one goal.”

“Porsche took a chance on me in 2010 with a store that had around 40 employees,” Blue said. “Today our business provides careers for almost 400 automotive professionals which supports their families. This energizes and motivates me with purpose. I look at where we are today after eight short years and it is an incredible blessing to see what we have accomplished.”

Blue’s success is matched by a strong commitment to giving back to his community. With the help of his leadership team, Blue established the annual indiGO Drive4Kids fundraiser in 2012, a community event that combines his love of sportscars with philanthropy. To date, the initiative has raised nearly $200,000 for children’s charities throughout Texas and California, the two states in which the event has taken place.

Blue has also supported the California Highway Patrol 11-99 Foundation (provides emergency benefits to the patrol’s employees and their families in times of crisis); Petersen Automotive Museum (Los Angeles, California); Rancho Mirage Chamber of Commerce; Palm Springs Chamber of Commerce; The Barbara Sinatra Children’s Center; The Bianca Rae Foundation; The Prostrate Cancer Foundation; St. John’s School and Texas Children’s Hospital in Houston.  He is currently a member of the Young Presidents’ Organization and is chairman of the board of The indiGO Blue Family Foundation, which supports various initiatives.

While Blue has received numerous awards for his leadership, he is proud of being named one of the 100 Best Dealerships to Work For by Automotive News. “Knowing that our employees, in a confidential survey, would confirm that our dealerships exceed their expectations is a great accomplishment,” he said. “It acknowledges that our company mission is alive and well.”

Dealers are nominated by the executives of state and metro dealer associations around the country. The award is sponsored by Time in association with Ally Financial, and in cooperation with NADA. A panel of faculty members from the Tauber Institute for Global Operations at the University of Michigan will select one finalist from each of the four NADA regions and one national Dealer of the Year. Three finalists will receive an additional $5,000 for their favorite charities and the winner will receive an additional $10,000 to give to charity.

In its eighth year as exclusive sponsor, Ally will recognize dealer nominees and their community efforts by contributing $1,000 to each nominee’s 501(c)3 charity of choice. Nominees will also be recognized on AllyDealerHeroes.com, which highlights the philanthropic contributions and achievements of Time Dealer of the Year nominees.

“It’s an incredible honor to recognize these dealers for their business accomplishments and their unwavering commitment to ‘Do It Right’ by helping others in their communities,” Timmerman said. “They are extraordinary auto leaders who care and go the extra mile to give of themselves to make their communities stronger. Ally is proud to support and celebrate their achievements.”