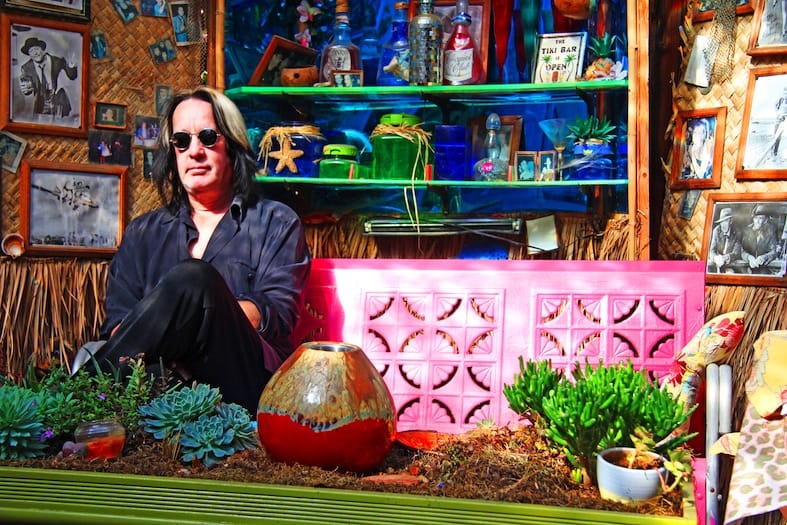 Todd Rundgren could be described as the Swiss Army Knife of rock. The guitar maestro emerged from the Philadelphia scene of the late ’1960s as an equally successful singer, songwriter, multi-instrumentalist, bandleader, engineer, and producer.

As a producer, Rundgren had the hot hand for helming hit-generating albums for artists ranging from Meat Loaf to Grand Funk Railroad to XTC, but it took a move out west for the always busy musician to finally find his own brand of personal zen.

“Yeah, it was an inexorable move out west,” Rundgren recalls, now 67. “We first moved to San Francisco, but found out that wasn’t westward enough for modern life.” Today, Rundgren calls Hawaii his home. The man’s own hit machine will be on full display during An Evening With Todd Rundgren at the Spotlight 29 Casino in Coachella on Jan. 9. Concertgoers are likely to hear a mix of chart hits and FM favorites like Hello It’s Me, I Saw the Light, Can We Still Be Friends?, and Bang on the Drum All Day.

Before he said aloha to getting back on the road, we called Rundgren at his Hawaiian homebase to discuss how he feels about the California lifestyle, handling earthquakes, and what the differences are between his PG and R-rated live sets.

What were your impressions when you first got to Southern California in the late 1960s?
“I got to Los Angeles when I was about 19 or 20 years old. That would have been with The Nazz, and I think we were there recording our first record. We intended to burn up the charts with it, but that didn’t work out.”

[The self-titled October 1968 debut album of The Nazz only reached No. 118, but today, it’s an acknowledged garage-rock classic that includes the trippy sing-along Open My Eyes and the original version of Hello It’s Me.]

“I had never been there before, but I was kind of taken with the town of Los Angeles, particularly because there were so many attractive women! I was also taken with the idea of a city where you never talked about its downtown. Whenever you talked about L.A., you were talking about Sunset Strip, Santa Monica Boulevard, and all of that stuff.

“When I first got out there, I had no idea what kind of a ‘flat’ city it really was. You had to drive everywhere, and I would discover in later years that was one of the reasons why I can’t stand L.A.! (both laugh). But at the time, I was just fascinated with the lifestyle, and there was something of a music scene happening. I guess it was in 1970 or 1971 that I actually moved out to L.A. for a year. That was when I recorded Something/Anything?”

[The double album Something/Anything? was released in February 1972, has sold more than 500,000 copies, and contains some of Rundgren’s biggest hits like Hello It’s Me, I Saw the Light, and Couldn’t I Just Tell You.] Well, that move to L.A. kind of worked out for you then, didn’t it?
“Yeah, and there was also the fact that I had a pretty nice place up in Nichols Canyon that was a five-minute drive from everywhere — at least a five-minute drive that you had to tack on once you got out of the Canyon. There was an earthquake the year that I lived there, and I had never experienced that before. And that (pauses briefly) — that really upset me.”

You’ve played out there before, though.
“I haven’t done Coachella, but I have done a couple of the reservation casinos in Southern California, and they’re usually pretty far out there.” What can people who come to the Spotlight 29 Casino show expect to hear in your set?
“I hate to give people expectations in case I don’t meet them (laughs), but this time, I’m going out with a band. Last time, I had a DJ, two dancers, and a whole lot of lights. It was a fun show that was done for the Global album [his 2015 electronic-oriented release].

“This show is a bit more conventional, and it’s called ‘An Evening With.’ We don’t play much new material; we play mostly the old material. I’m starting to think at this point that my shows have to have some certain sort of rating to them — like a film rating, from PG to R. This one is on the PG side.

“Sometimes, I do shows for mature audiences, but mine are the other way around — that is, the PG shows are for the older people. The R-rated shows, the ones that are a little more crazy and more interesting to me — those usually work with a younger audience.”

I like not always knowing what I’m going to get from your set, whether you pull a deep-dive Utopia track or a Nazz track out of your vast catalog. That appeals to me.
“Well, you know, we kind of like to keep those options open, particularly when we’re out on the road for almost three months. After a couple of weeks of playing the exact same set every night, that can dampen your anticipation of the show, because you know exactly what’s happening night after night. That was what caused me to put together what was called ‘The Unpredictable Evening With,’ where anything might happen. But this show will not be that unpredictable. It will be pretty predictable.” You also recently finished up a run with Ringo Starr as a member of His All-Starr Band, right?
“Yeah, about a month ago, we finished up with Ringo, and rumor has it we’re going back out again next summer.”

This particular group of All-Starrs has been playing together a couple of years now. If you keep going like this, you could be together longer than The Beatles were.
“Well, we’re in our fourth year now, so if we make it another few more years, we’ll have outlasted The Beatles, yes.”

It’s probably hard to pick, but do you have a favorite Beatles track, other than what you play in Ringo’s sets?
“There are some that have found their way into my own sets with some regularity. I’ve done several versions of While My Guitar Gently Weeps, including one for a tribute album to George Harrison [2003’s Songs From the Material World: A Tribute to George Harrison].

“And You’ve Got to Hide Your Love Away is something I’ve been doing for several years in my solo shows, so you never know if that’s going to pop up.”