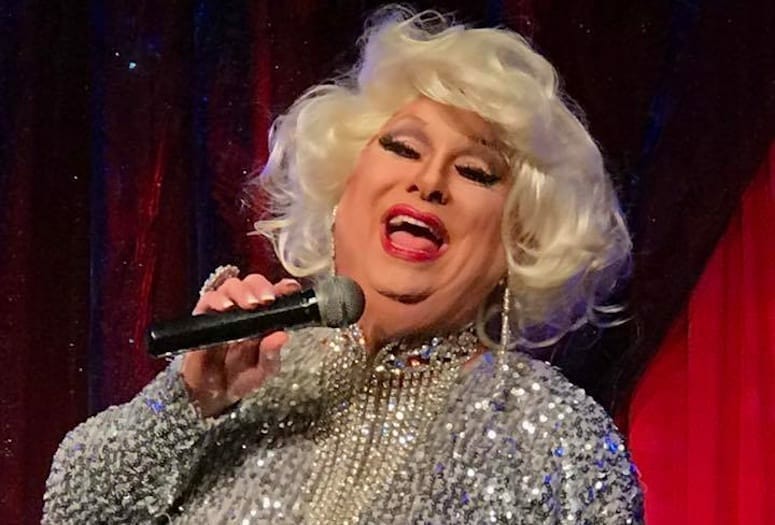 The night began at a bar on July 3rd in Daytona Beach. But when Tommi Rose found his calling, the clock had moved past midnight to signal the 4th of July in 1976. While there were not literally fireworks going off that first time Rose (aka Thomas Bank) hit the stage in drag, there was a rush just like watching red, white, and blue explode against a dark sky in celebration.

“It’s an adrenaline rush,” Rose says. “I’m an adrenaline junkie for the most part. I love the feel of it. And I love singing songs that can make people really laugh. And I also like being able to turn around and sit on a bar stool, and do a ballad that actually pulls heartstrings. And have them come up to me afterwards, ‘Oh my God, that song was so beautiful.’ Because anytime I do a ballad, I always have a story or connection to it.”

Take off the makeup, the dazzling costumes, and dim the spotlight, and Tommi admits he’s a completely different person. 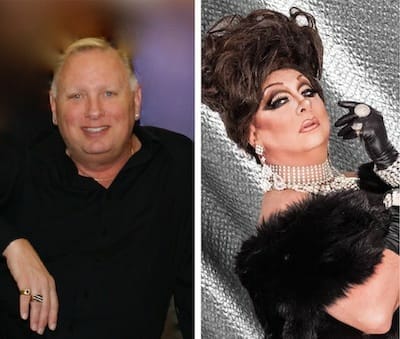 Tommi Rose, aka Thomas Bank, before he lost 70 pounds.

Despite the dichotomy, Tommi has been delighting Greater Palm Springs audiences for 20 years because as the boisterous Tommi, he knows how to connect with people.

Even though I’ve walked into clubs and they tell me, ‘Now, don’t do this, don’t do that.’ Well, when I’m out there on the stage, and if I feel it’s like, screw it. I cut loose. And never once has a club come back to me and said, ‘Don't ever do that again.’ It’s like, ‘Oh my God, we can't believe that worked,’ because I know my audience. And they say, ‘Well, we know our audiences. We know what our demographic is.’ It’s not about the demographic, it's about being where they are at any given moment. And you can get a feel of that in your first five minutes on stage.”

You can see ‘Tommi Rose and the Playgirls’ in a pair of shows every Sunday night at Toucan’s Tiki Lounge and Cabaret in Palm Springs. And look for Tommi on Toucan’s float at Sunday’s Greater Palm Springs Pride parade starting at 10 a.m. down Palm Canyon Drive. In a conversation with Palm Springs Life, Rose shares more of his colorful life and a peek at what his future holds. 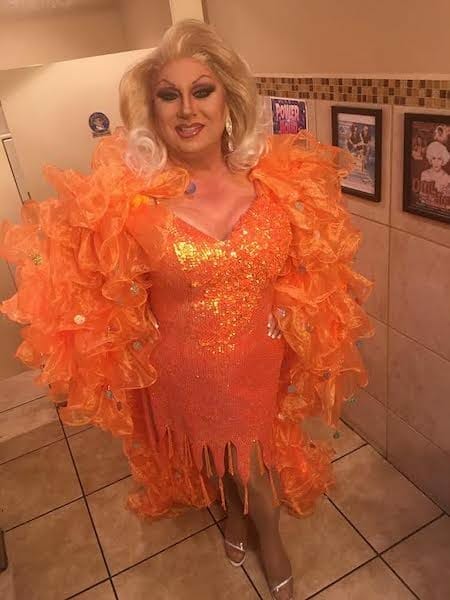 Even before you went to that bar in Florida, you knew the stage was calling.

I was watching an afternoon talk show with Mike Douglas, Merv Griffin, One of them. And he announces, ‘Please welcome my very special guest this evening, Ms. Betty Davis.’ And me, I'm like, ‘Squeal!’ The curtain opens, but it wasn’t Betty Davis, it was Charles Pierce, who was the foremost female impressionist and impersonator at that time, nationally known worldwide traveler. And I was mesmerized. I knew about drag shows from the Parliament House. Friends of mine had told me, but I was like still 15, 16. I didn't even try to chance it, but I wanted to go so bad. And my mom explained who he was, and that it was a female impersonator.

Every one of us in our lifetime has had one of those, ‘Oh shit moments’ when something comes out of your mouth that you swore was your inside voice, and it wasn’t supposed to come out. And when I said, glaring into the TV, ‘That's what I want to do.’ I went, ‘Oh shit.’ And I turned to my mom and she smiled and she said, ‘Well, you better start practicing now.’ And we talked some more. And I said, ‘I’m going to meet him.’ And she said, ‘You know what, Tommi?’ She said, ‘I have no doubt you probably will.’

And you did meet him?

Well, my audition at Finocchio’s in San Francisco didn't go so great. Friends of mine said, ‘Come on, we’re going to go to dinner. It was 1980. I had just turned 21. We went to dinner at the Fairmont Hotel. They had a wonderful Tonga Room downstairs, and it used to be where they had their Olympic size swimming pool, which hadn’t been used in years, so they turned it into this big pool and it was decorated very tropical. And they had a live band that was on a raft that was pulled out across the pool.

After that show was over, we went upstairs and I was headed toward the door. They said, "Oh, no, no, we’re going to go see a show." They were walking in front of me, and I really couldn’t see the marquee of what it was. And then this very smartly dressed woman in a tuxedo came and sat at the piano, and there was a small band. And she did her little nod, and started playing. And they said, ‘Please welcome to the stage, our special guest this evening, Mr. Charles Pierce.’

Charles came out, did his show, and I was so blown away. And after the show was over, everybody was leaving and we were sitting there. ‘Are we leaving?’ And they said, ‘Just wait.’ And the waiter came over and said, ‘He's ready.’ They got up, and they said, ‘Come on.’ Well, ended up, they never told me that they were friends of Charles, and they took me backstage, and I got to meet him. So, he said, ‘Y’all come back tomorrow night, and stick around when the show's over. I got to get changed, tonight. I have plans, but tomorrow night I'm free.’ I went back the next night, and after the show I was invited to come to his hotel room, and sit and talk with him. And such a charming man. We became friends and developed a friendship. And at that time, I had an affinity for Mae West. And I was kind of doing imitations of her. And he started coaching me, and he called Mrs. Finocchio and said, ‘This kid's really got something. You need to give him a second chance.’ And I could hear over the phone. She goes, ‘Well, he ain't a dancer.’ And Charles said, ‘No, he's not.’ He said, ‘Eve, listen, this kid’s going to be a headliner. I see it.’ So, I went back, and did my audition, and I got the job. 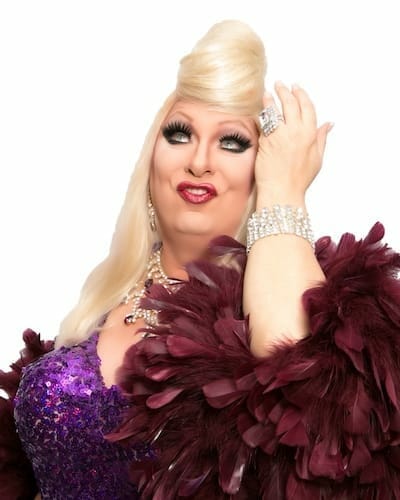 What was the drag scene like when you came to Palm Springs in 2002?

There was none. There were a few queens who lived here locally, but the last show was at CC Construction about eight or 10 years prior. Daddy Warbucks had already gone away. It was CC's on Sunrise, because the CC's up on Perez where all the bars were and the bathhouse and all that, they all went away. I came here and was living with a friend, and he said I needed to check out a new club called Toucans. And people that I've met and worked with, I feel so blessed to have found a home in Palm Springs.

And I feel like we’ve given a lot of performers a platform that they might not have had. And many of these kids from RuPaul's Drag Race, the first several seasons, worked for me long before there was RuPaul.

What have the years here taught you about yourself. You eluded earlier to not being comfortable in your own skin. Are you in a better place now?

I'm still getting there, but I think I'm on the right path. I'm trying to find my happy place. My joy. One of my friends that I would like to say has become a very dear friend in this desert. Every time I see her, regardless of the bumps in life that she has gone through, and the hurt, and the lost people in her lives that she’’ had to deal with, and her personal life, and professional life, and how she has tortured herself. But, regardless of all that, she always comes back out of it. And she’s always with a smile, and she tries to find. She's kind of inspired me. She’s younger, but at my age, I can still take inspiration. That’s why I think I’m on the right path because ‘’m still able to learn new things about life and myself. And I’m learning it from people that are younger than me. I don't want to be that old curmudgeon that so many of us turn into.

What was the best advice anyone a ever gave you about being a drag queen?

Joe Finocchio. He said, ‘We operate on the KISS principle here. Keep it simple, stupid. Audiences want to come in, and they want to be entertained. They don't want to have to fake.’ So, just keep it simple, keep it fun, keep it light. And if you want to do a drama and make them think and tug at their heartstrings, that’s okay too. But you better follow it up with something up tempo. He said, ‘But, they are coming to see a show because it’s escapism.’ They want to see something they’re not going to see on TV. So, I've always kept that in mind, which is why I still do impersonations of the old standard Hollywood classics. I'll do a bit of Tallulah Bankhead and Betty Davis. I do a whole show as Mae West and Carol Channing. I do Phyllis Diller. 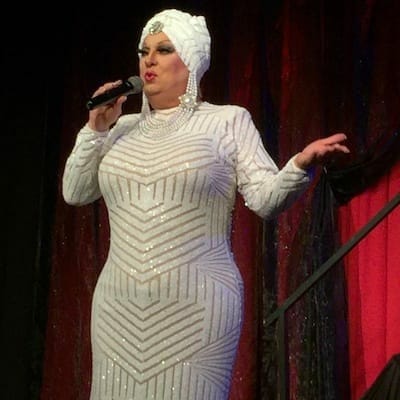 What are you most proud of?

I think I’m most proud of the fact that I’m able to see where I’ve come from. And I think I have a vision of where I’m going, and what I want. Whether or not I will be able to attain it, but it’s not going to stop me from trying.

You’ve had heath challenges, especially in the last 5 years. Why do you share that with your audiences.

I have been very public about my health issues because to me, I see it as a community service. I’ve been diabetic my whole life. Several years ago, I had renal kidney failure, and I had to be put onto emergency dialysis with tubes. There’s scars in my neck. They put a shunt in, so I have a port. And then, I was on dialysis for two and a half years and they said, ‘It’s not working. We’ve got to find you a donor.’ And the only way to get it, because the donor list, I was way too far down, was to find a living donor.
And I put a call out, and got a living donor. I got my transplant. And I talk about that because I want people to know, you need to take care of yourselves because this is what I'm going through, and I don’t want to see other people go through it. And I feel that I’m kind of a poster child for that because I've come through it with flying colors. It’s been four years since my transplant. I've lost 70 pounds, not the way I wanted to, but I got sick again. I had COVID twice. I was in the hospital three times, actually. Twice in the hospital. The first time in ICU on a ventilator.

Do you foresee yourself stepping down from performing?

• READ NEXT: Bob the Drag Queen Sashays to Perform at Palm Springs Pride.