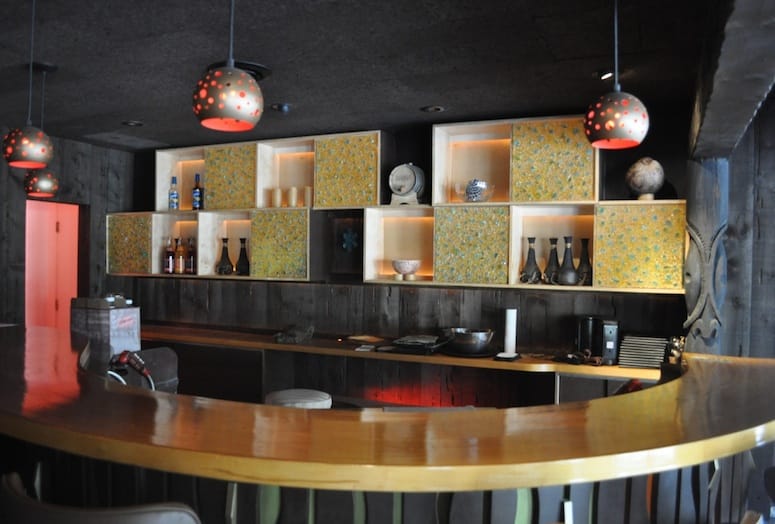 "Gin is very big in New York right now and it’s coming here," says Boylan, "so I want to be ready."

Boylan, co-owner of Tonga Hut Palm Springs, has been prepping for the bar/restaurant's opening, which happened officially Valentine's Day weekend and included sponsorship of a Modernism Week event Feb. 17 on Tiki Modern at the Hilton Hotel Palm Springs.

Tonga Hut is an off-spring of a bar by the same name in Los Angeles, which dates back to 1958 during the heydays of Tiki bars in southern California like Don the Beachcomber and Trader Vics. Boylan has been looking for an opportunity to open a second location, and found a strong tiki connection in Palm Springs.

"The El Mirador had a place that was frequented by all the Hollywood stars," Boylan says. "Chi Chi's is probably the most famous of all of them. The Bamboo Room at the Racquet Club. And places that served Tiki cocktails like Romanoffs."

The bar sits on the second floor above NYPD Pizza on Palm Canyon Drive with a perfect view of the construction underway to build the six-story Kimpton hotel.

Boylan loves the patio area, and inside she hopes customers like the combination of Tonga Hut's cocktail expertise combined with a Polynesian/American menu featuring Bob Jones, the former owner of Davey's Hideaway, which closed last year. The restaurant portion of Tonga Hut will be called, The Hideaway.

"The Polynesian menu will be old school Catonese, with Pu-Pu  platters, that’s egg rolls, spare ribs, rumaki, and crab Rangoon," Boylan says. "On the American side, we’re going to bring all the famous Davey items to the Tonga Hut – lie the prime rib, the wedge salad, and shrimp cocktail."

Boylan said tastings will be held, and the cocktails will feature classics like Manhattan's to Daquiris to serving Whiskey neat, plus some new twists on old mainstays.

"If you love a certain cocktail, we want you to know what the possibilities are with different alcohols," Boylan says, "We make a Mai Tai, which is probably the most classic Rum drink, and we make it with Rye, ancd call it a Rye Tai."

Like the Tonga Hut in Los Angeles, Boylan hopes it appeals to an audience that marches to the beat of a different drummer.

"It’s OK to be a little different," she says. "We might be more than a little different. I think if the food and the cocktails are as good as they are in LA, we will have a place for people in Palm Springs to come, hang out and get away for awhile."

VIDEO: Take a tour of the Tonga Hut Palm Springs.