Tony Bennett: The Name Stays With You 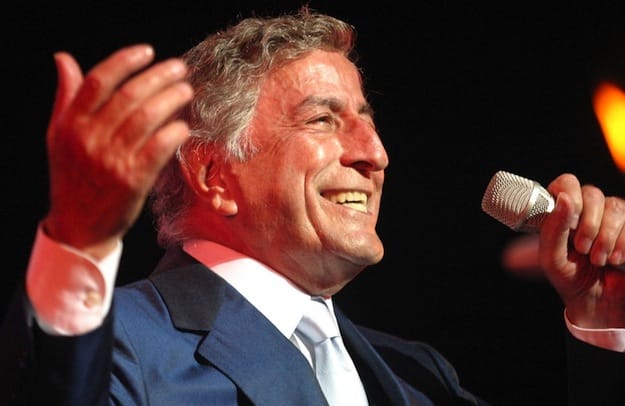 Born Anthony Dominick Benedetto, he changed his name to Joe Bari when Pearl Baily discovered him while singing in Greenwich Village in New York.

When Bob Hope signed Bari in 1949, he suggested the singer change his name to Tony Bennett and put him in his road show.

That’s the name you’ll see on the marquee Thursday night for a 7 p.m. show at The Show at the Agua Caliente Resort Casino in Rancho Mirage.

The name has become synonymous with singing legend. Bennett’s first big hit, “I Left My Heart in San Francisco” was actually the B-side to “Once Upon A Time”, rose to No. 19 on the Billboard Hot 100 in 1962 and earned a pair of Grammys.

Bennett struggled staying relevant as the rock ‘n’ roll era took over, survived a battle with drugs but revived his career when his son, Danny, took over as manager. For his 80th birthday, Bennett recorded, Tony Bennett: Duets, which paired him singing with contemporaries like Elvis Costello, Elton John, Bono, Sting and Barbra Streisand.

The record did so well that Bennett came out with Duets II in 2011, which included “The Lady is a Tramp” with Lady Gaga and “Body and Soul” with Amy Winehouse, which captured the Grammy for Best Pop Performance by a Duo or Group in 2012. He won another award for “Who Can I Turn To” in a duet with Queen Latifah, marking his 17th Grammy.

You will see the name Anthony Benedetto on paintings, a hobby Bennett has turned into a second career with exhibited work in galleries around the world. His pieces have sold for as much as $80,000, and he has published two books featuring his work.