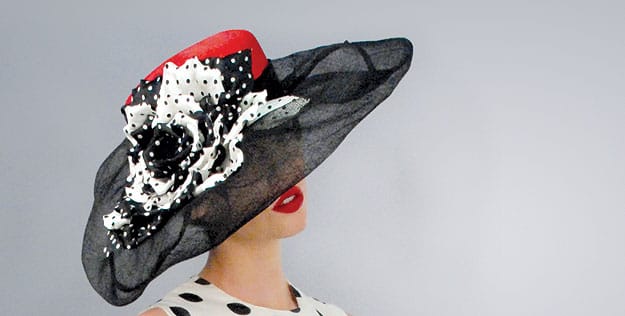 Louise Green has crowned celebrities from Barbra Streisand to Shaquille O’Neal. Wearing an exquisitely trimmed hat of her own creation, the milliner unveiled her spring/summer collection at Saks Fifth Avenue in The Gardens on El Paseo in Palm Desert.

You might have seen her gold stovepipe hats on the models appearing in the Trina Turk runway show at Fashion Week El Paseo. Turk found the prototype in England and commissioned reinterpretations with varying crowns and brims.

She pays more attention to what her patrons want than to overarching market trends.

Green conjures up fascinators, the clip-on headpieces getting a high profile lately. But she loves the cloche, the flapperesque, bell-shaped model that has roots reaching back to the 1920s. “It’s the backbone of my business,” she says.

Her penchant for hats traces to her native England. After settling in Los Angeles in 1983 with her architect husband, Lawrence, she studied millinery with classmates who included African Americans in quest of church hats. Finding the chapeaux expensive to make, she took her first collection to the priciest L.A. boutique: Maxfield. Proprietor Thomas Perse “handed me a check straightaway,” she reports.

Today, with Lawrence involved in the business, the Greens own a building on L.A.’s west side, where a staff of 12 crafts hats from the best materials and findings sourced from around the world.