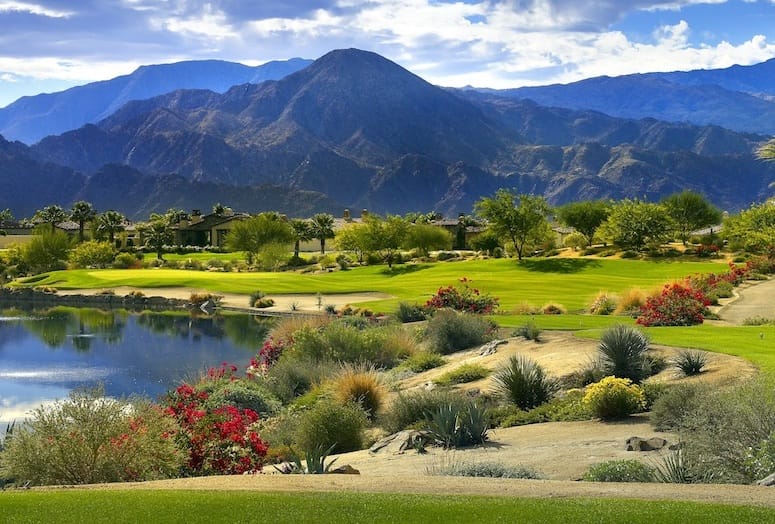 It had been about two years since my last time playing golf at Toscana Country Club, having enjoyed my nascent experience in early 2013 with my dad in tow.

A few weeks back, I had the pleasure of returning for a round at the Indian Wells-based club and experienced heightened appreciation for these plush grounds.

Celebrating its 10th anniversary, Toscana is presently constructing the eight unfinished holes on its North Course. Scheduled to debut in November of 2015, completion of the Jack Nicklaus-designed North will mark the desert's first championship course opening since Eagle Falls cut the ribbon in 2007.

"This will be beyond distinct," says Rick Sall, Toscana golf course maintenance director. "These courses are definitely unique in their own styles." An aerial view of the No. 10 hole under construction at Toscana Country Club's North Course.

Adds Dave Craig, director of golf at Toscana, "When you look at the back nine on the North and the way it's laid-out – to me, that's going to be the best nine holes we have here.”

As shaping for holes 10 through 17 on the North take place, both Craig and Sall marvel at what will soon be.

"It's pretty amazing what you have to think about here from both a developer's standpoint along with a golfer's standpoint," says Craig. An aerial view of the North Course's lake. Both the North and South courses will be entirely irrigated by recycled, canal water.

While reveling in the lake-laden, "Core Golf" design to be offered on North holes 14 through 17 (no homes surrounding and no road crossings), Sall further champion's Toscana's environmental commitment, with both courses to be entirely irrigated by recycled, canal water.

Additionally, both men extend equal zeal for the attention to detail displayed by hands-on developer Bill Bone, the Toscana team, and Nicklaus Design.
A recent "day in the dirt" paints Bone's eye for detail.

"Mr. Bone looked out at the 10th hole, where there are two bunkers on the right that frame the hole; and the lips looked a little high," describes Craig. "And he said, 'That's not how the North front looks; those bunker faces are much lower. And we don't want this to look like a different golf course when you go from nine to 10.'" With "The Golden Bear" scheduled for a January visit to the grounds, the project is slated to proceed as follows:

"With the shaping and everything to be done by Mr. Nicklaus, the final greens approval should be done the first week of June," says Sall. "We'll then spray immediately – all vegetative material – and we would have it grown in by October, overseed it, and then be open by November."

A few months ago, I employed this space to discuss why trends in desert golf mirrored reasons for the game's concern on a national level.

However, with recent news that the former Kraft Nabisco has a newfound sponsor in All Nippon Airways coupled with the exciting plans for a massive resort at SilverRock in La Quinta – the valley's identity as an international golf nexus would appear to be on a sudden and enticing uptick.

And the action at Toscana isn't simply mirroring the new trend.  It's at the epicenter of the vibe.