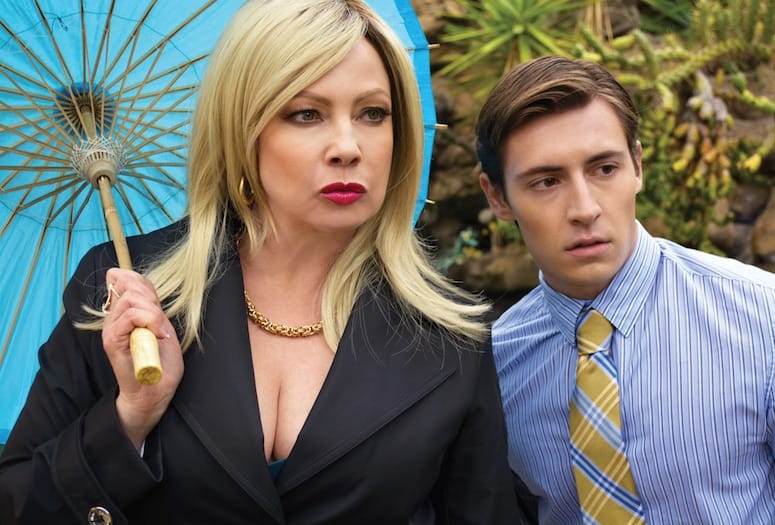 Traci Lords and Eric D'Agostino pair up for a scene from Steam Room Stories: The Movie set to screen at Cinema Diverse on Sept. 21.
PHOTOGRAPHS COURTESY JC CALCIANO

In a career spanning more than 30 years, Renaissance woman Traci Lords has acted in film and TV, she’s done modeling, made music, and written books and a short film, which she also directed. She’s also created a fashion line and still finds time to work as an activist for causes that are dear to her.

Later this month, she plays conniving Sally Fay, a cosmetics giant eager to get her hands on the fountain of youth at any cost in writer-director JC Calciano’s Steam Room Stories: The Movie, which is based on his successful web series that has attracted more than 52 million YouTube views.

The film screens at 7:30 p.m. Sept. 21 during Cinema Diverse, the LGBTQ film festival at the Palm Springs Cultural Center, which opens Sept 19. The film festival offers a bonus weekend of films as well, Sept. 27-28, at Cathedral City's Mary Pickford Theatre.

Traci spoke candidly to Palm Springs Life about the joys and perils of doing comedy, the #MeToo movement, her experience working with Roseanne Barr, and her big gay following.

What can people expect from Steam Room Stories: The Movie?

A laugh-out-loud, ridiculous, fun romp. It’s outrageous and over the top. I love that it’s just a little bit of cotton candy in a very serious time we’re in.

Had you seen the web series?

I had. I was actually a fan, and when I first heard they were making it into a feature, I thought, How’s this going to work? I thought it was really clever the way that JC put it all together. We shot the film very, very quickly, I think in 14 days. 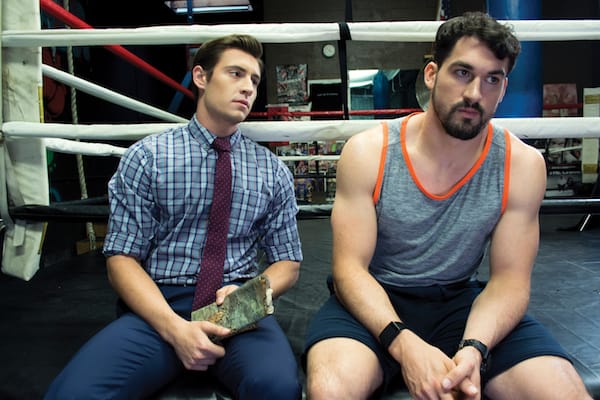 Eric D'Agostino (left) in a scene with Jacob Buckenmyer.

I interviewed JC a month ago, and here’s what he had to say about you: “Traci is always the first person there and the last person to leave. She could not have been more accommodating and generous to me and the other actors. And she’s so funny and so witty and clever.” What was he like to work with?

Wow. I thought the same about him. He’s a genuinely nice person. He has a cool head and a charming demeanor, and he brought that energy to the set. Working with him was a real pleasure. I’ve said this before: A lot of the comedies I’ve done my career were the least fun to make. I don’t know why that is. So, it was nice that this one was genuinely fun to do.

I was really intrigued by Sally Fay because she is outrageously arrogant and beyond confident, but at the same time there’s a mask there. She’s really afraid of growing old, and she becomes fixated on it. Which was intriguing to me because as an actress in Hollywood, it’s something you’re constantly reminded of. Once you’re no longer 29, you start to hear the final march of, “once you turn 30 ...” and then “once you turn 35 ...” and “once you turn 40 ...” As if it’s supposed to be the end of you. So, to play with that in a fun way was intriguing to me, to play somebody who was so fearless – but was she really? I had a good time with it.

The film is making its Palm Springs premiere at Cinema Diverse: The Palm Springs LGBTQ Film Festival, which is perfect because you have a big gay following. Was that a demographic you intentionally courted?

No, it wasn’t. It just happened. When I did [my first Hollywood] movie, Not of This Earth, I was surrounded by costume designers and makeup artists and people that were bisexual, straight, gay – people of different walks of life. And over the years, my friendships were always like that. There were no barriers. And I think my relationship with John Waters and being cast in Cry-Baby really introduced me to the lesbian and gay community. I feel very supported by them, and I’m really grateful for that.

When I told people I was interviewing you, several of them said to me, “I loved 1000 Fires [Lords’ amazing 1995 techno music album]. When is she doing another record?”

That’s so flattering. I have contributed music over the years; I’ve contributed to soundtracks and what have you. I’ve definitely thought about doing more music, but it’s always taken second position in my career. I don’t have a band. I do everything. So, I don’t know if that will happen again. Until I can make the kind of follow-up records I want to make, I don’t know that I will. But you never know.

What are your thoughts on the #MeToo movement? Were you subjected to any such experiences in your mainstream career?

I think it’s a conversation that’s long overdue, and I’m glad the conversation is there. As far as me personally, that kind of stuff absolutely happened to me, but it happened when I was a minor. Not in mainstream Hollywood. Probably because [by the time I went mainstream] I had created a persona of ... John Waters once referred to me as a sexual terrorist. And I think that “bad girl” persona was kind of scary to some people, so I wasn’t exactly prey at that point. So, thankfully I missed that part of it. 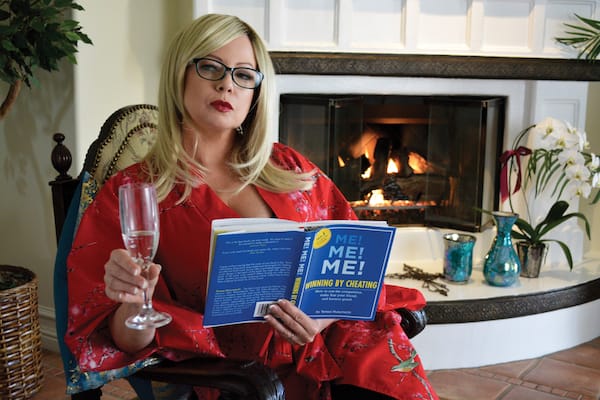 You appeared on the original Roseanne show. What was your experience like with Roseanne Barr the person?

She was incredibly supportive of me, very protective. She was really kind. I have nothing but good things to say about my working relationship with her. She was always absolutely professional and really, really good at what she did. I know she’s a much more controversial figure now and people have opinions about her. That person I never met. I never witnessed that side of her.

You’ve had a pretty diverse career. What’s left on your professional wish list?

I’ll be making my stage debut in January 2020. That’s something I haven’t done. And it’s a big deal for me. I’ll be playing Gloria in a production Women Behind Bars in L.A. I think it’s good every so often to do things that terrify you, so I’m excited about that. I also think it’s time for me to take more control of my own projects. I definitely see myself as a filmmaker, moving more and more into those types of projects. I’m not saying I don’t want to act; it’s just that there are other hats I want to try on. Other than that, my life is amazing. I have an incredible husband of 17 years and an amazing 10-year-old son. It’s been a hell of a journey, but it’s not over. And unlike Sally Fay, who frets about every line on her face, I feel like I’ve earned everything that I have, and I am so grateful for it.