As part of the ancestral home of the Agua Caliente Band of Cahuilla Indians, the Indian Canyons maintain thousands of years of cultural heritage and history and remain one of the most popular tourist attractions in Palm Springs. On any given day, you’ll find families picnicking beneath blonde-skirted palm trees, hikers setting out on sandy trails, bird enthusiasts scanning the horizon with binoculars in hand, and horses carrying their riders across mountain-fed streams. 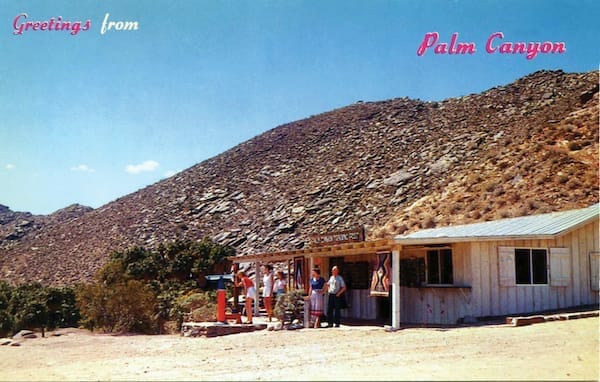 The Trading Post, tucked into a craggy hillside overlooking Palm Canyon, offers an assortment of refreshments and keepsakes for visitors who wander in before or after their adventures. However, this informational center and souvenir shop hasn’t always been home to the books, T-shirts, art, jewelry, pottery, and baskets you’ll find there today.

Its backstory begins more than a century ago, when German-born immigrant William Frederick Pester arrived in the United States, traveling west until eventually settling in the sun-drenched Coachella Valley.

Though few details are known about Pester, aka the “Hermit of Palm Springs,” historical photographs place him in the area sometime after 1906. Fleeing civilization in search of a more peaceful, solitary retreat, he found the perfect spot in Palm Canyon, tucked away within the Agua Caliente Indian Reservation. Here, next to a crystal-clear stream and beneath a cool canopy of palm trees, Pester immersed himself in nature and lived in harmony with the land. He built a small cabin using wood and fronds from the surrounding palms and spent his days exploring the area and playing his slide guitar.

It wasn’t long before others learned about the long-haired, bearded “hippie” living in a lush palm oasis on the outskirts of Palm Springs. He became a magnet for curious tourists and even celebrities, appearing in photographs with the likes of Rudolph Valentino and (according to lore) inspiring the Nat King Cole song “Nature Boy.” 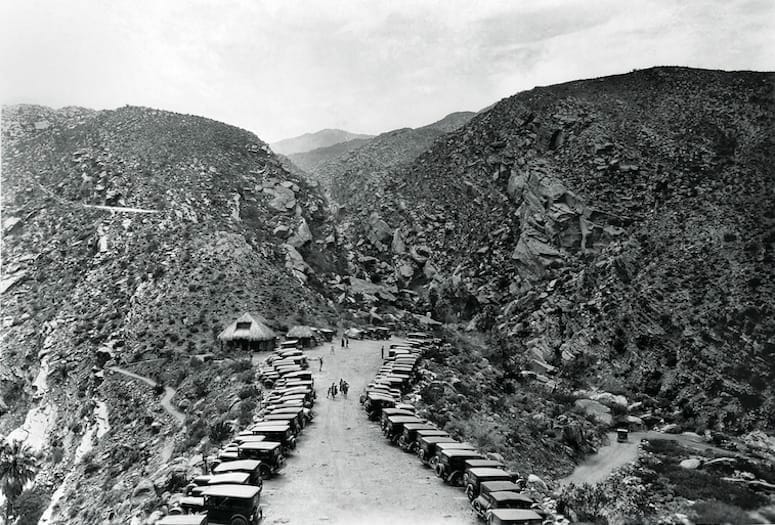 By 1927, the Indian Canyons’ popularity had soared—welcoming hundreds of people on busy days—and Pester’s solitary refuge no longer felt all that solitary. He left, and it’s around this time that R. Bruce Cregar, a U.S. government licensed Indian trader, began operating his business out of Pester’s cabin, selling jewelry, rugs, beadwork, baskets, and other articles he had collected during his travels. When a devastating fire destroyed the building in approximately 1940, according to a Desert Sun article, Cregar opened a new Palm Canyon Trading Post in the same spot, which he managed for several more years, along with a second business in downtown Palm Springs. 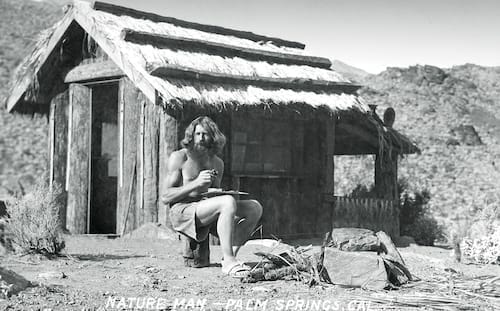 William Frederick Pester aka the “Hermit of Palm Springs”.

In the 1950s, the Agua Caliente Tribe entered a new era of development and self-sufficiency, with the passage of 99-year land leases paving the way for future economic growth on Tribal land. Little is known regarding the Trading Post’s operations transition to the Tribe after Cregar closed his business; reportedly, there were proposals to pave a road through the heart of Palm Canyon all the way to the town of Ribbonwood on State Route 74, which would have destroyed 15 miles of pristine wilderness.

Ultimately, the Tribe established an Indian Canyons Master Plan to preserve these beautiful lands and cultural resources, including the Trading Post. Thanks to the Tribe’s careful upkeep and supervision, the Trading Post can continue to welcome hikers and nature enthusiasts for decades to come. 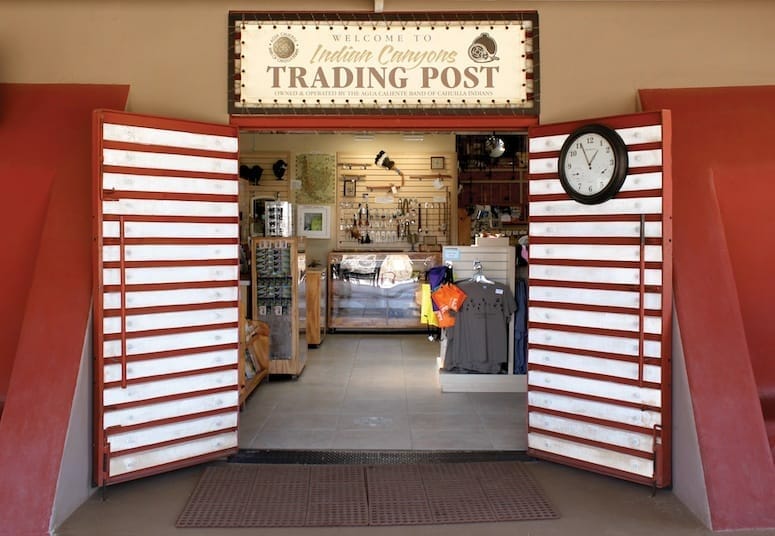 PHOTOGRAPHY BY STUART FUNK
The Trading Post opens its doors to visitors in search of refreshments before or after their hike, as well as one-of-a-kind souvenirs, from T-shirts, hats, and other apparel to books, jewelry, and art. 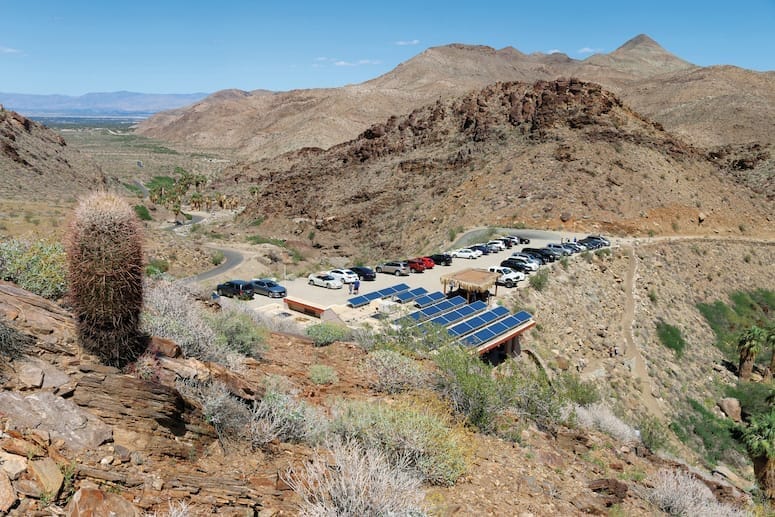 From 2007 to 2010, the Tribe completed several upgrades to the Trading Post, replacing an old propane-powered generator and leaky roof with a solar system that comprises 30 separate 275-watt roof-mounted photovoltaic panels. Today, the 700-square-foot building sits entirely off-grid, powered by the desert’s blue skies. 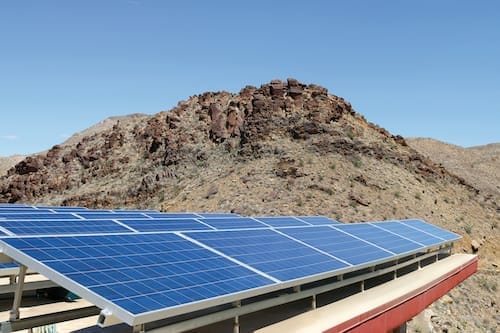 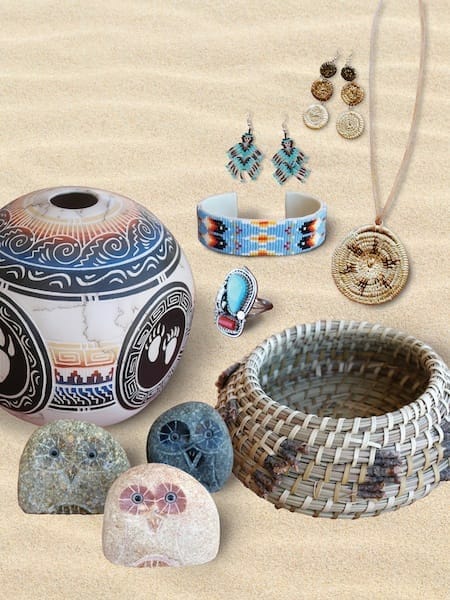 Inside the Trading Post, Native jewelry, books, and other unique treasures await.

Here are a few of our favorites.