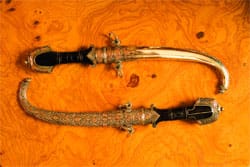 When you walk through the entrance, the first thing that strikes you is that this is a room filled with priceless artifacts — among them a Julia Margaret Cameron daguerreotype of Lord Alfred Tennyson with his two sons, Hallam and Lionel; a 19th-century Chinese basin and pitcher perched atop an antique Sino-Tibetan traveling monk’s desk; and a towering set of 300-year-old teak columns from India.

Even more amazing is when you realize that you are not in an exhibition hall at the Art Institute or The Getty. You are, in fact, visiting the Rancho Mirage home of Julia Roberts, a private collector who has amassed a striking collection of time-honored decorative arts sure to make museum curators pea green with envy.

Arguably once viewed as a pastime solely for the rich and famous who could afford to bid at venerable auction houses like Christie’s and Sotheby’s, collecting antiques and memorabilia has entered the mainstream, driven in large part by Antiques Roadshow. Traveling appraisers on PBS’s most-watched prime-time series (now in its ninth season) help collectors assess the value of heirlooms and garage-sale finds.  Perhaps most fascinating are the colorful stories behind the objets d’art.

Roberts, too, delightedly shares tales that illuminate her lifelong devotion that began with a family-owned antique shop. As a child on the Isle of Wight — a short ferry ride from the coast of southern England — she often accompanied her mother to home sales where chairs would be lined up and every item would be assigned a lot number.

“My mother would send me around when I was 5 and say, ‘Now you look high and you look low.’ So I would be looking under the tables to see if there was some gorgeous brass pot or some lovely thing there,” Roberts reminisces. “If it wasn’t an antique, it didn’t come into our house.”

Roberts’ involvement in the world of antiquities continued when she moved to Los Angeles in 1962 and signed on as a docent for the Natural History and Page museums.  Her intrepid search for antiques has taken her to several continents, including Africa, Europe, Asia, and South America. Several years ago, she brought back a prehistoric lungfish fossil from Brazil, carrying the fragile object on her lap for the entire return trip. She often purchases a coveted antique even if she is not sure where to use it.  “Some people say, ‘Where will you put it?’ And I say, ‘It doesn’t matter; I love it!’”

In addition to her travels, Roberts has acquired several pieces from her brother, a London-based antiques dealer, as well as from upscale local galleries like Maison Felice, Dwight Polen, and La Galleria, a consignment store planning to reopen soon in a new Coachella Valley location.

Elana Donovan’s avid foray into early decorative arts began in 1981 after she and her husband traveled to England and France. “I was so overwhelmed with the architecture and the gardens that when I came home, I really wanted to find some way to learn more about architecture, interior design, and landscape,” recalls the part-time Palm Desert resident. She signed up for courses at a decorative arts center in San Juan Capistrano, learned tricks of the trade from a dealer in Corona Del Mar, and attended workshops through the French Heritage Society.

Donovan is particularly drawn to French country antiques, a style that characterizes her Newport Beach residence. “I love French pieces from the country — pieces that weren’t made for the Royal Court, but the craftsmen had probably gone to Paris and seen the very best,” she says. “Then they went back to their provinces and reinterpreted the look for people locally, using local woods and materials, and sometimes they made the very best pieces.”

Although many factors come into play when choosing a particular antique, one facet that draws Donovan to a vintage piece is its patina. “The depth of the finish always excites me,” she says. “You can tell when a piece is 18th century. It usually has wonderful lines, and the shape of a leg is something I think is beautiful.” After years of study and collecting, Donovan now leverages her expertise as a board member of the Decorative Arts Lecture Series of Newport Beach.

As fate would have it, Roberts and Donovan met at a weeklong workshop on 18th century French decorative arts at Christie’s in London, where Donovan had just completed a five-week course on decorative arts — from Renaissance to modern times — at Sotheby’s. They agree that education is integral to training the eye, as well as finding the right piece — and for the right price.  Thanks to Maison Felice on El Paseo in Palm Desert, valley collectors have had access to several illustrious experts in the field of decorative arts since 1999, when gallery owner Phyllis Washington established the Style De Vie Lecture Series.

“I learned about antiques and interior design by attending workshops in Europe and studying with mentors,” Washington says. “I wanted to share my passion for interior design and the culture of art and architecture with my many friends and customers in the desert.”

And share that passion she does.  The Style De Vie lecture calendar has included several luminaries from the world of architecture and design, including Paul Vincent Wiseman, founder and president of The Wiseman Group, a renowned San Francisco-based interior design firm, and Will Strafford, head of European Furniture and Decorative Arts for Christie’s.

When starting a collection or determining how to integrate art and antiques into your home, Wiseman and Strafford concur on an invaluable piece of advice: “If you are going to live with it, you need to like it,” Wiseman says. “And there definitely must be some passion behind it.”