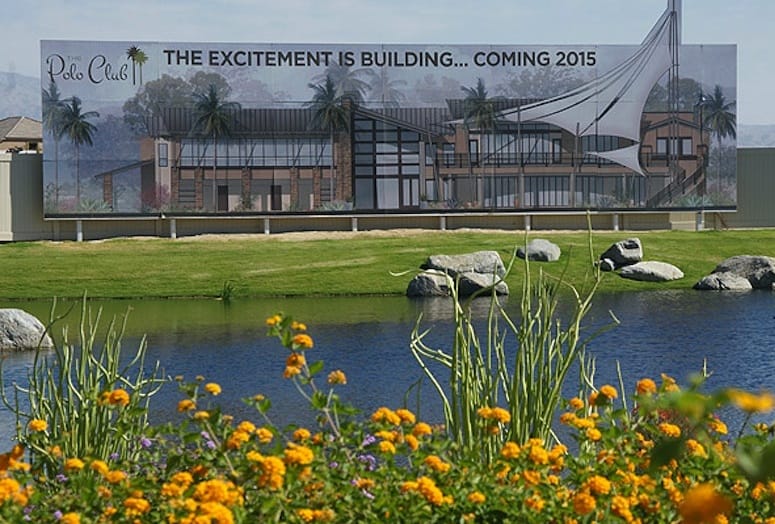 There seems to be no end to the number of amenities developers have been adding to the new homes they’re building throughout the Valley. So it only seems logical that community clubhouses chock full of amenities, and designed in architecturally interesting styles, wouldn’t be far behind.

In Indio, Trilogy at the Polo Club recently broke ground on The Polo Club, their 25,000-square-foot clubhouse with a design inspired by the Southern Pacific Depot Station & Hotel.

“What we try to do in all our clubs across the country is find some historical references to the culture of the area we’re building in,” says Ryan Smith, General Manager for Shea Homes. “And so one of the cool things that developed the entire valley is that this was the main stop between LA and southern Arizona on the Pacific rail line.”

Another nod to local icons can be seen in the large sails that will adorn the rear elevation of the club, and will be immediately visible when you drive through the main gate.

The exterior of the club will feature stone, steel, glass, a metal roof, as well as some roof tile, and stucco.

“The shade structure over our second floor deck is designed kind of around ones you’ve seen both at the Empire Polo Grounds and at the Indian Wells Tennis Gardens,” says Smith.

“So what we try to do is take inspiration and make a connection of our club to the local area, whether that’s taking architectural elements from the mountains that surround us and trying to incorporate those into the architectural design, or taking inspiration for some of the other cool facilities in the valley like Bighorn and the Empire Polo Club,” adds Smith. “We really try to create an interpretation across a whole palette of architecture.”

The developer considered seven different architectural styles before finally settling on what Smith calls a modern desert mountain architecture. “We’re trying to layer on a whole bunch of things,” he says. “It has some midcentury references [along with a] rustic and modern juxtaposition.”

Amonge the amenities will be Two Palms, an event center that will be on the second floor of the club and will open to a large outdoor deck that’s underneath a sail structure.

For the interior of the club, “Our design team is doing the same thing, where they’re taking some rustic elements and interspersing them with modern, clean interior design,” says Smith. “So the color palette is taken from a polo theme. We’ve got some greens, yellows representing the sun, and white. It’s going to be light, bright, and airy. The palette itself was inspired by colors one might see on a polo field.”

“The challenge we told our design team was, let’s treat this club almost like a cruise ship,” adds Smith. The club’s gym will have a fitness studio at its center encased by glass. The Paddock will be a take on a traditional game room, but with a golf simulator, billiards and poker tables, and a barroom shuffleboard table.

"I think what’s the defining feature of our club is the exceptional food and beverage component with [our restaurant] June Hill’s Table,” says Smith. “Within that space, residents will be able to have their own wine lockers. Around the corner from that is our Marketplace which will have our casual dining.”