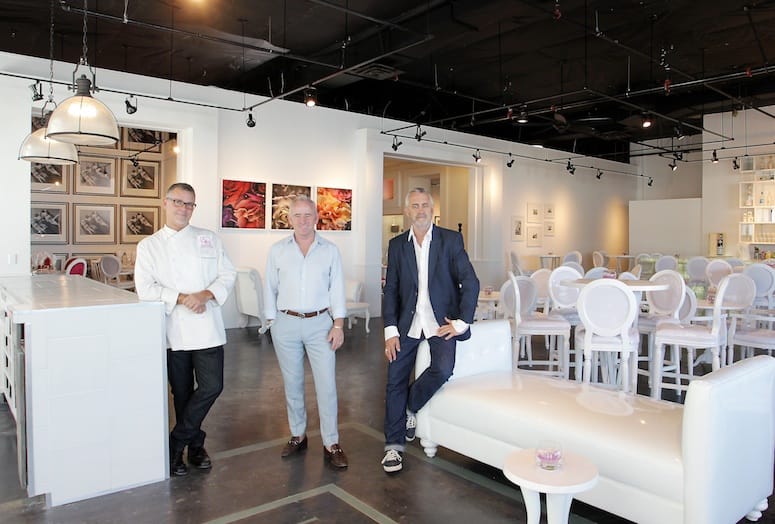 VIDEO: Co-Owner Willie Rhine talks about what to expect from the new Eight4Nine.

Eight4Nine officially opened its doors this week, but the latest addition to North Palm Canyon “is all a matter of timing,” says co-owner Willie Rhine. “(Co-owner) John (Paschal) and I meeting at the right time, finding this building and that (Executive Chef) Chuck (Courtney) was available. Everything just lined up at the right time.”

The idea for Eight4Nine started a couple of years ago when Rhine, former general manager at Lulu California Bistro and Acqua Pazza, catered photographer Paschal’s wedding. “I really liked (Willie) and was thinking of doing something different,” says Paschal, who owns a studio in Palm Springs.

At the time, Rhine too was thinking about opening a place of his own. And when the two compared notes, “We were looking at something small,” Rhine says. “A place to do breakfast and lunch.” This large farmhouse table to the left formed the concept design for Eight4Nine.

But their realtor showed them the 849 Design Studio space, and both men saw the potential. “We went from thinking about a 50 seat space to 300,” say both men.

The design concept for the casual, upscale restaurant sprang fully formed in Rhine’s mind, and with a photographer’s eye for composition, Paschal agreed with what he wanted to do with the space. Building out Eight4Nine set Rhine and Paschal back financially. “Every cent we had has gone into this place,” Paschal says. “We maxed out our credit cards more than once; this is all us and our empty wallets!”

A large farmhouse table in the front dining area was the impetus of some of the design concept. Rhine had purchased the table at a garage sale, “I didn’t know what I was going to do with it,” he says. Painted bright white and resin coated, the table became a focal point. A black-and-white theme is softened with pops of bright pink and turquoise.

The interior of Eight4Nine is a contrast of color, using a black-and-white theme, it is softened with pops of bright pinks and turquoise in chair backs and wall insets. Tables and seating are an eclectic mix of styles, from outdoor wrought iron to traditional dining, that give the restaurant its casual profile. The large lounge features a back-lit bar and plenty of seating for a quick lunch or to linger an evening cocktail. There is also a misted patio weekend brunches or balmy autumn dining with views of San Jacinto Mountains and Palm Canyon.

When it came to finding the chef, Paschal recalled dining at the Citron a decade before and loving that the chef could whip up a simple desert at his request. As it turned out, that chef was Courtney, who was back in the Coachella Valley after more than a 10-year absence. Courtney loved the idea of working with Rhine and Paschal to create the restaurant’s menu.

The menu is as eclectic as the design. There is a hamburger, “We had to have one,” Courtney says of the certified Angus beef burger with a choice of artisan cheeses on a brioche bun. Twists on classic recipes are Courtney’s specialty. “We wanted to freshen things up,” he says. Instead of tuna, the Nicoise salad is made with house smoked wild caught salmon; eggs Benedict are topped with lobster and green goddess Hollandaise sauce; Willa Jean’s fried chicken is accompanied by bread & butter pickled green tomatoes and topped with a truffle honey drizzle; and the scallops and Manilla clams are dry-packed divers scallops with Courtney’s house-made clam chowder.

Rhine’s husband, Albert Gonzalez is Eight4Nine’s pastry chef and has created a line of sweets to die for, says Paschal. Desserts are all made in-house, including the Coachella lime pie and apricot, salted caramel and bacon bread pudding to the chocolate s’mores with house-made marshmallow.

“I took some home to try,” Paschal says. “While I was working in the office, my husband took them into bedroom and ate them all! I didn’t even get a crumb!”