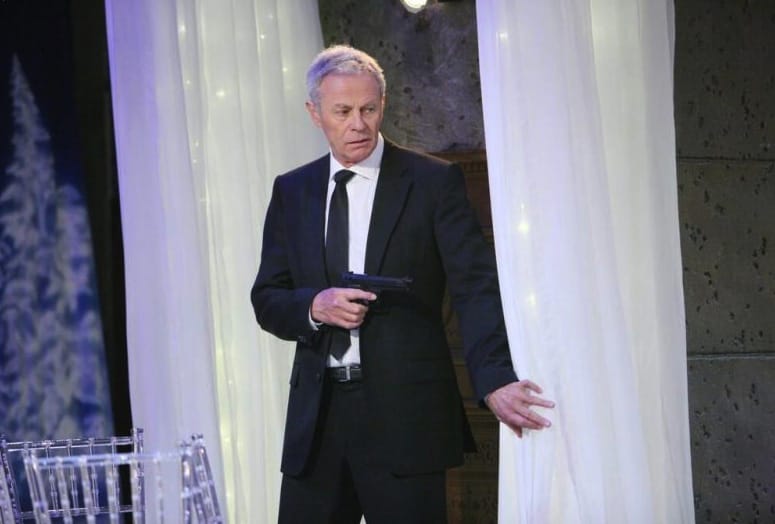 It’s not often that audiences have the opportunity to watch a seasoned actor make a theater debut.

Veteran television star Tristan Rogers will take to the stage at the Palm Canyon Theatre in Palm Springs for the very first time in an adaption of Sam Shepherd’s play, True West. The show opens May 30 and runs through June 8 with performances Friday and Saturday nights and Sunday matinees.

“I swept one (a stage) once, but I’m not nervous,” Rogers says. “It’s a different dynamic (than television). Stage is disciplined. You’ve gotta get it right and it’s live and you are left naked for everyone to see you screw up.”

Dashing Daytime Drama
Rogers is best recognized as the heroic Australian adventurer and ladies man, Robert Scorpio, who captured the hearts of audiences and soap opera fans on General Hospital. He played Scorpio on and off for more than 20 years until recently reprising the role of Colin Atkinson on The Young and the Restless.

“When I joined General Hospital, daytime was incredibly influential and popular,” he recalls. “It was done well and entertaining. I wasn’t looking to be a role model, but to entertain.”

Rogers has been entertaining, producing and writing since the 1960s, with projects in major films, television movies and shows, as well as web-based productions. He has also been the spokesperson for several major TV ad campaigns, including The Rescuers Down Under (voice), Fast Track (television series) and The Bay (television series). From Down Under to the Desert
A native Australian, Rogers has lived in Palm Springs for more than 20 years with his wife, Teresa, and their two children.

“We basically came to Palm Springs to raise our kids,” says Rogers, who commutes back and forth to Los Angeles to work. “We didn’t want to the raise them in Los Angeles. I like the community here…it’s a relaxed time here. We also have a lot of friends and we are very social and into local events.”

In addition to being a regular on the Palm Springs charity and social scene, including his support of Desert Aids Project, Rogers is heavily involved in promoting television project production here in the desert.

“This area has a unique look that has not been exploited,” he says. “We also have a large group of talented industry professionals from both sides of the camera.”

In fact, colleagues David Steen (Django Unchained, Reservoir Dogs) and Sean Kanan (General Hospital, The Bold and the Beautiful), who both have homes in the Coachella Valley as well, encouraged Rogers to join them in the local production of True West.

“It sounded like a good idea and certainly, working with these guys made things easier,” he says. “Director Mark Blanchard’s input was invaluable and he knows the play very well. He has given me insight into the character. Without this, I might not be feeling as comfortable.”

Rogers will also bring a quite different aspect to the performance, playing a traditional Western character as an Australian.

“This will be a great place to try things out…it’s a great theater,” Rogers says. “I’ll know a lot of the audience and while this is not going to change how I act, it will be interesting for people to see me in another light.”