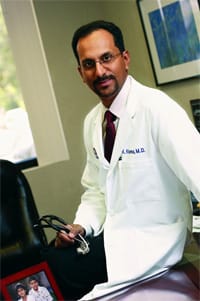 A believer in preventive care, Dr. Puneet Khanna works hard to educate his patients about making heart-healthy choices: regular exercise, low-fat foods, and swearing off smoking and other heart-damaging vices. He also touts some of the new heart screening and scanning techniques, but cautions that unless the patient has symptoms or hereditary heart disease in the family, a pricey scan may not be the first line of defense against future problems.

"There’s a definite place for screening and scanning, but it’s also important to become educated about your own heart health," Khanna explains. "Monitoring your weight, making dietary changes, sticking with an exercise regimen — these are all lifestyle choices everyone can make that can produce significant benefits."

Khanna’s decision to pursue a medical career could be considered as a combination of genetics and destiny. The Rancho Mirage cardiologist comes from a family of physicians. His mother, father, and sister are doctors, and as a young boy he trailed behind his cardiologist dad during hospital rounds and was fascinated by the fast-paced world to which he found himself privy.

"I was only 6 or 7 when I decided I wanted to be a doctor," he recalls. "I was drawn to cardiology in part because it was my father’s specialty, but also because of the ever-advancing nature of the field. This is an area of medicine where there are breakthroughs happening continually. It requires you to think on your feet and often care for the critically ill. I find it both challenging and rewarding."

As a board-certified interventional cardiologist at Eisenhower Medical Center and a member of the dream-team lineup at Desert Cardiology Center, Khanna was the first cardiologist in the Coachella Valley to in-troduce the SilverHawk Plaque Excision System, lauded for its ability to combat peripheral vascular disease. PVD occurs when the arteries of the legs become narrowed or clogged by plaque, resulting in cramping, tingling, or numbness and making a simple walk around the block daunting.

"PVD is often misdiagnosed or untreated because people believe leg pain is a normal result of aging," Khanna explains. "With a simple, nonsurgical procedure, the SilverHawk relieves the pain and literally gives patients a new lease on life."

When it comes to his own lifestyle choices, Khanna enjoys a healthy dose of recreation whenever he can. But with a typical workday lasting 10 to 12 hours (and more when emergencies arise), the in-demand doctor has precious little time to pursue his passions for golf and skiing. A family man first, Khanna values heading home for dinner with his wife and two kids, where the conversation inevitably shifts to "shop talk," much as it did when he was growing up.

"My wife is an oncologist, so any family gathering at our home eventually revolves around medicine," he says, laughing. But he’s noncommittal about whether his children are poised to follow in their parents’ footsteps. "Time will tell," he says. "Right now, I’m focused on making sure they love golfing and skiing so when they become teenagers and think it’s uncool to hang out with dad, I’ll have an ace in my pocket to draw from. A trip to Vail or Pebble Beach is always a nice incentive."