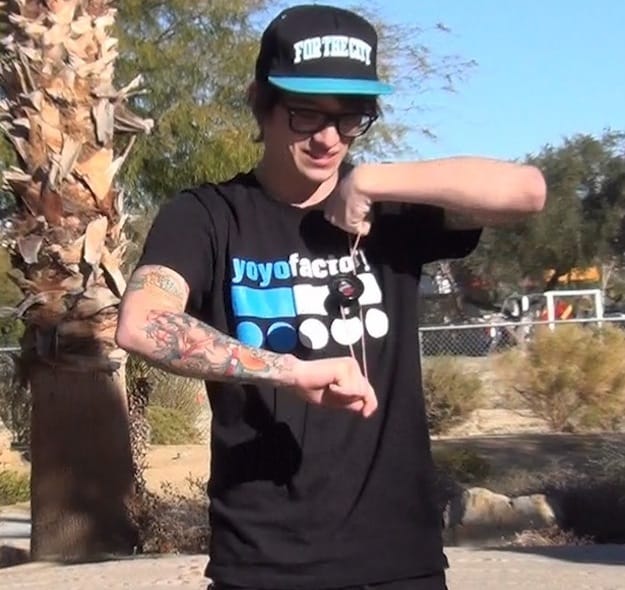 Tyler Severance, the current U.S. National champ, has been in the Coachella Valley promoting the 2013 Southern California Yo-Yo Championships set for 10 a.m. Jan. 26 at The River in Rancho Mirage.
Jim Powers

Individuality has never felt better for Tyler Severance than holding a piece of string attached to a circular device skyrocketing in all directions.

The sense of control over success or failure shaped his teen years. And now at the ripe age of 21, the current U.S. National Yo-Yo champion realizes whether he stays with the sport or not, it’s shaped the person he has become going forward.

“It changed not only how I act as a person, my confidence and how I handle myself, but the way I view life and how I want to approach my career,” said Severance, who has been in the Palm Springs area since Jan. 15 promoting the 2013 Southern California Yo-Yo Championships, set for 10 a.m. Jan. 26 at The River, 71800 Highway 111, in Rancho Mirage. He has been joined on the tour by fellow YoYo Factory Team members Seth Peterson and Ann Connolly plus Vashek Kroutil, who is visiting fron the Czech Republic.

“Even if it wasn’t yo-yo related, it would be a multitude of things I could take things I learned in yo-yoing and apply it there,” he added.

Ever since taking a childhood hobby competitively, Severance has excelled. And quickly. By his second year, he captured the USA 5A National and 5A World titles (where players use counterweights on the other end of the string rather than having it attached to a finger). He has continued to finish among the top four on the World stage since then, and after a five-year absence regained the USA National crown in 2012.

While yo-yo competitions created separation from his peers involved in the usual team sports, Severance took an even bolder step when he boarded a plane for Phoenix just three days after high school graduation to work for YoYo Factory. Up until that point, yo-yoing had created a sense of identity, a rebellion, of sorts, from the conformity a teenager can feel from his parents, and a sense of belonging.

He was unsure the sport would feel the same if he added a dollar figure next to it.

“I was a teenager and I was concerned that I was not going to like it anymore,” Severance said. “It made me so happy independently because I was so miserable in high school. I didn’t want to ruin it by trying to get paid.”

Since joining YoYo Factory at age 17, Severance has broadened his relationship with the sport by adding product development (he has three Yo-Yos under his name), promotional tours, public relations and marketing to his resume.

“I learn something every day with yo-yoing,” Severance said. “It’s an industry that is constantly changing, and the toy is changing. That’s why it’s interesting. It never stops. You’re always trying to predict or pull some string to make something happen.”

And that proved to be important for Severance, who continues to push boundaries, test his creativity and accept the consequences.

“Yo-yoing is more of a test of my level,” Severance said. “The judges, no matter what the sport is, you can’t rely on them. It’s not so much about reading your judges, it’s that you are on your game. If you go clean, it will be hard for a judge to say that you deserve less than first place. But if you leave them some room, then they can come back to you and say you messed up, so it’s on you. It’s more of a test of yourself than other people.”

Watch the video and listen to Tyler Severance talk about his greatest fears during a competition, how he devises new tricks and what he hopes to accomplish in the sport long-term.