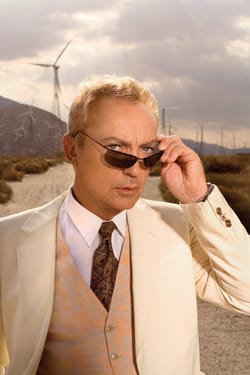 Wearing a lime-green shirt, olive pants, and the facial expression of a man fully aware that one wrong move could kill him in an instant, Udo Kier — the cult-film villain who has terrorized big-screen audiences for nearly 40 years — steadies himself on a ladder inside the old Francis F. Crocker Library across from Victoria Park in Palm Springs. He’s installing a ceiling fan with the intensity of so many film characters he has portrayed and every ounce of do-it-yourself spirit he can muster. If this scene were in one of his films, he’d likely be garbed in black and electrocuting himself in maniacal bliss. But this is Palm Springs and the innards of an architectural classic: the 1965 library designed by John Porter Clark with help from the Swiss-born modernist Albert Frey — a structure that became a children’s daycare center before it closed and dropped off the radar and into shameful disrepair.

Kier’s portrayal of dark and disturbing characters — from the title role in Andy Warhol’s 1974 Dracula to The Picasso Killer who slices and dices his victims in cubist fashion in this year’s Fall Down Dead — belies the bright spirit of the man who has taken to resuscitating the lifeless library.

“Ten years ago, I went to Desert Hot Springs to get away from it all,” Kier says, referring to his grueling film-production schedule that whirls him around the world. “A girlfriend showed me Palm Springs, and it fascinated me. It’s clean, organized, programmed. I used to come to the modern hotels.

“I love Palm Springs,” he continues. “I call it Cadillac City. They all have Cadillacs and drive from A to B, from B to A. They have big sunglasses and everybody’s happy. I always think it would be interesting to do a movie about Palm Springs — ‘Hi, I’m Rita and I’m 83!’ She’s on stage. I like the great energy.”

Before the library, he bought a George and Robert Alexander house, his desert home (he also has a house in Echo Park in Los Angeles). Kier, 62, had started collecting midcentury furniture long before he came to Palm Springs and before it became hip again. He also enjoys the resurgence of interest in Alexander houses. “This was cheap housing for working people,” he says. “They’re simple and minimal because people had no money.”

Back in the library, architecturally designed furniture, including chairs by Charles Eames and a coffee table by Isamu Noguchi, fills three distinct living spaces — each a vignette with its own area rug; coffee table; lighting; couches and chairs; and shelves filled with books about art, architecture, and film. A white and black dining room set floats in the center of the space. “They’re objects,” Kier says of the furnishings. “You can’t just put them in a corner. Each needs to have its own space. The library is perfect.”

The library captured his imagination almost by accident. “I was walking with my dogs and it was raining like in Rocky Horror Picture Show,” he deadpans. When a real estate agent took him inside a few years ago, “it had a horrible Easter-green carpet and wood dividers.”

He insisted on buying it, leaving neighbors and city leaders eager to see what Kier would make of the library and the adjacent empty lot large enough for two single-family homes.

Worry not. Kier is a preservationist with a passion for art and architecture. The library will always reflect these sensibilities. He will not sell the property; that would be selling his dream, he says.

“The building has a good spirit — intellectual, as the place where people came to take out books and learn, and innocent, as a daycare center for children,” Kier continues. “Now it’s me. I let very few people in here. It’s very personal place.”

However, this vision will need time to materialize. “It took one year of restoration,” he says, “because I’m working [on films] a lot. I work on the library from time to time.”

The actor-turned-handyman is restoring the library with his bare hands. He constructed the 500-foot block wall around the property. “I could control it and make sure every brick is straight,” he says. “I also shaved the [concrete] floor, built and painted the walls, and did the kitchen.”

Outside, Kier envisions a lap pool measuring 14×44 feet (he was born Oct. 14, 1944) and a world-class sculpture garden that will open a few times a year to the public. He says it will include works by Alexander Calder, Alberto Giacometti, and Jeff Koons. (Kier’s art collection includes works by Warhol, Man Ray, Antoni Tàpies, Salvador Dalí, René Magritte, Wolfgang Tillmans, and Roy Lichtenstein.)

“The library is a therapy center [for me],” he says. “When you work in an artificial environment, it’s good to do something that’s real.”

The artificial environment has served Kier well. When he was 15, he met Rainer Werner Fassbinder, who was a few months younger and far less handsome. “We were beauty and the beast,” Kier says, recalling their meeting in a bar in Cologne, Germany. “I didn’t know he was going to make movies.”

Kier, who had survived the bombing of the Cologne hospital where he was born during World War II, worked on an assembly line to earn enough money to move to London to learn English. “I went to England when I was 21,” he says, “and I made my first film in England [playing the boy in Michael Sarne’s 1966 The Road to St. Tropez]. The cameraman was very kind to me. I was the ‘new face’ on the cover of the German magazines.”

The terrifying character within him surfaced in Mark of the Devil (1970), which had nuns being raped during the opening credits and Kier’s character, Herbert Lom, tortured to death by the townspeople (for good measure, a women’s tongue is ripped from her mouth in between beatings of other characters).

By chance, Kier sat next to Paul Morrissey, who directed Warhol’s films, on a flight from Rome to Munich. “He asked, ‘What do you do?” Kier recalls. “I said, ‘I’m an actor,’ and I was young and insecure, so I had pictures. Because he had nothing else to write on, [Morissey] wrote my telephone number on the last page of his passport.

“One day I got a call saying, ‘Hello, this is Paul Morrissey from America,’ and he said he was filming [Flesh of] Frankenstein for Carlo Ponti and he had a role for me. I said ‘What is the role?’ and he said, ‘Doctor Frankenstein.’ A star was born for the German press.” Less than a year later, Morrissey cast Kier in the title role of Warhol’s Dracula.

The Story of O (1975) made headlines worldwide, “not because the film was good,” Kier concedes, but because it parlayed Dominique Aury’s novel into a graphic show of sadomasochism and sexual perversion that had the film widely banned.

Around the same time, Kier was preparing to shoot Magyar Rapszódia (1979). “I was told to not wash my hair or shave,” he says. “So I didn’t wash my hair and I didn’t shave, and I looked like a homeless person. It reminded me growing up in a poor family.”

Kier continues to make films in prolific fashion, winning roles in My Own Private Idaho (1991), Johnny Mnemonic (1995), two Pinocchio films, and many others. He appears in five films released this year: The Third Mother, Tell, House of Boys, A Simple Love Story, and Halloween (written and directed by Rob Zombie and opening this month).

Between filming, Kier participates in film festivals as a juror and as an honoree. He received a lifetime achievement award at the 2006 Palm Springs International Film Festival. He recently accepted another lifetime achievement award in Spain. “To get [the awards] is great, but an insult if you’re still working,” he shrugs. “But at least I get it while I’m working with [Quentin] Tarantino [Grindhouse, 2007].”

Kier rests, placing his Diet Coke next to the Taschen book Devils and picking up two books of photography — one a collection of Polaroid images by Stephanie Schneider, the other All Images of an Anonymous Person by Carsten Höller. “I like strange pictures,” he says.

He closes the books, pans the room, and contemplates the possibilities of the architecture, interior design, and placement of art. But he’s closing the therapy center for the day. He’s proud of the ceiling fan; he keeps saying so. But he’s en route the next morning to Texas, where he will receive another life achievement award and mingle with the industry set.

While he’s feted for his prolific career, he’ll be telling them all about the dream he’s making come true — something real in Cadillac City.