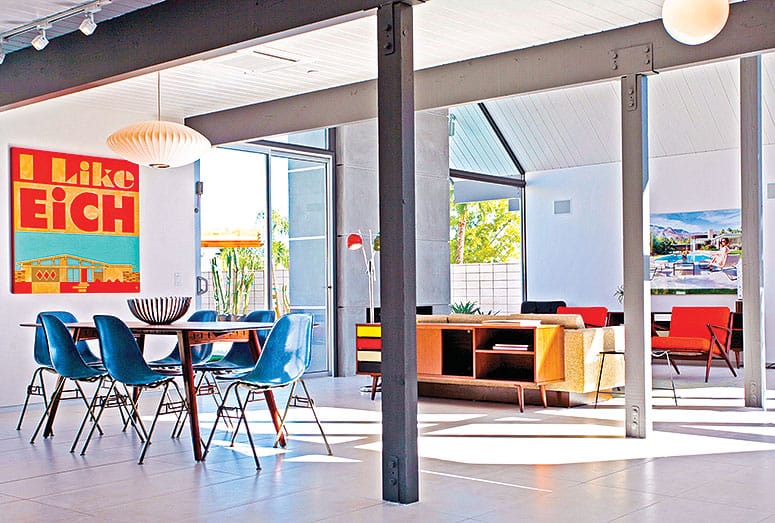 When Feb. 18 was dubbed “Eichler Day” during Modernism Week, even Troy Kudlac, president of KUD Development (the exclusive builder of Desert Eichler Homes locally), could not have anticipated the reawakened buzz around midcentury developer Joseph Eichler that would ensue. Credited for “bringing modern to the masses” — along with plenty of glass walls — Eichler worked with a variety of architects on his range of house plans that quickly caught on. Some 60 years later, Kudlac debuted a brand-new, licensed and certified Palm Springs Eichler home based on the visionary developer’s original plans translated into modern building standards. It is the first of its kind.

“As daunting and overwhelming as it was for us to put the first home on the market after 2 1/2 years in the making,” Kudlac says, “I think it was a huge success for us and for Modernism Week.” Amid the fresh flurry of attention on Eichler, the five-bedroom, four-bath stunner sold to a New York couple the day before its official “Eichler Day” tour and Mad Men Mixer event.

Based on one of Eichler’s larger plans, the 2,200-square-foot house offers comfortable and realistic proportions for a family and full-time desert living. Yet Kudlac says he has read and heard some questions about its liberal size. “There are literally hundreds of Eichler plans that are part of the progression of how he grew as a developer,” he explains. “He started with smaller plans, then tinkered with them with his architects to meet the market’s interest in bigger homes that were a lot more open and spacious.”