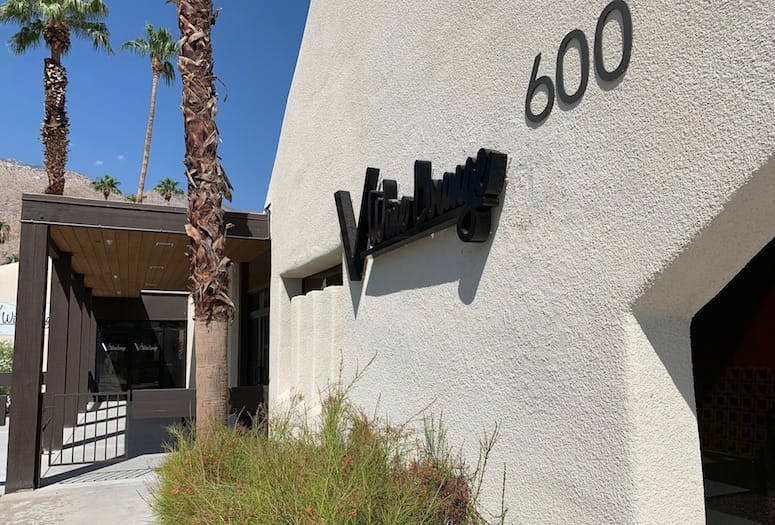 Growing up on a farm in Nebraska, Mikey Consbruck always thought he would follow in his dad’s footsteps. He earned a bachelor of science in plant science, but there was a downturn in the industry, and one farm could not support both father and son. Consbruck went back to school, earned a master’s degree in journalism and another in marketing, then headed off to Los Angeles to be a writer. He published three educational textbooks, then decided to go back to school again, and earned a post-graduate degree in landscape architecture and urban planning.

That one stuck. He owns a landscape firm in West Hollywood, but along the way he fell in love with wine, specifically California wines. He got involved in repping Central and Northern California wines in L.A. and — surprise — he became a certified sommelier.

Consbruck opened V Wine Room in West Hollywood as a tasting lounge for his cache of wines but, through word of mouth, grew it into what he calls “a wine library speakeasy.” That was eight years ago and now, with new partner James Mortensen, he’s expanding the concept to Palm Springs — but with a twist.

A large horseshoe-shaped bar and barstools adds to the wine bar atmosphere.

It’s not quite ready to burst from its cocoon, but V Wine Lounge is expected to officially open in early September following a soft opening in late August. You’ll step into a 1950s-style living room called The Connie and Larry Lounge, as a nod to Consbruck’s parents. “Think Austin Powers meets the Rat Pack,” says Consbruck. “We have couches and barcaloungers, and bright, bold colors.”

Besides the chill vibe, visitors can expect a very different service experience. “We’re staffing and training our servers for what we do. We don’t take a wine menu to the table, our servers talk to the customers about the types of wine they generally like.” Consbruck continues, “Do they prefer savory, fruit forward, tannins, earthy? Based on that, servers bring over some options. We do have a menu which we’re happy to provide, but we’re known for our specialized service.”

Of course, it’s a wine bar, so they’re also known for wine. With more than 4,300 wineries in California, Consbruck has opted to show consumers some lesser-known varietals (as well as the usual suspects). “Everyone knows about Merlot, Cabernet, and Chardonnay, but few know what a Braufrankish or Grüner Veltliner is,” he explains, “and we’d like to introduce you to them.” In-house there are 80 different wines, which are also available for you to enjoy at home. 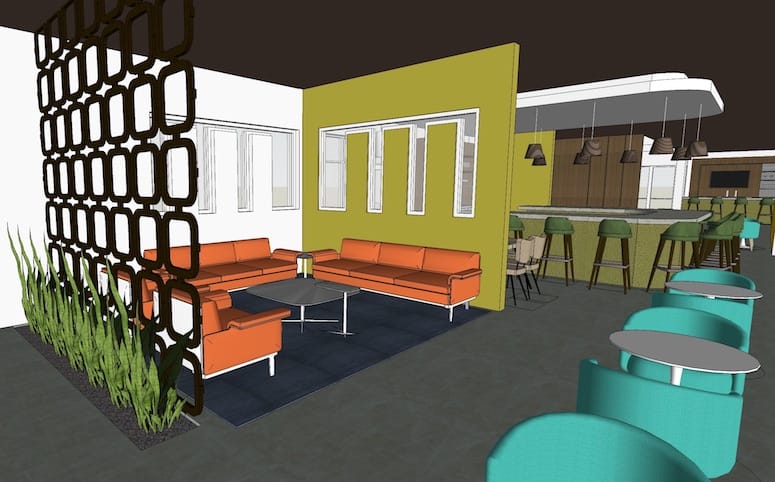 You’ll step into a 1950s-style living room called The Connie and Larry Lounge.

If you’re more of a beer fan or in the mood for a fun craft cocktail, you’re in luck. Those options will be available too, as will nibbles like the classic charcuterie board. For the adventurous, Consbruck has 24 cheeses for you to try, each as extraordinary as the wine selections, so expect flavors you never knew existed, like sweet vanilla Cardona (goats milk with vanilla beans in it).

The Connie and Larry Lounge is just the beginning of the V Wine Lounge experience. Further in is a large horseshoe-shaped bar and barstools, as well as another living room. With 3,800 square feet of interior and 1,000 square feet of patio, there’s a lot you can do, such as The Opal, a space which will accommodate 150 people for private events. But that’s not it’s only function.

“We don’t take a wine menu to the table, our servers talk to the customers about the types of wine they generally like.”

“We’re going to have blending seminars, pairing seminars, teach Wine 101 in there,” says Consbruck. You can also expect the unexpected. “I work with an entomologist who owns Bugible, edible insects. We’ve done wine and edible insect pairings with them.”

If you don’t have an appetite for bugs, don’t count on being served a meal as there’s no kitchen. However, they will let you call GrubHub and have food delivered, or you can order take-away from the restaurants with whom they partner. You can eat your favorite meal from your favorite restaurant and stay at V Wine Lounge drinking fine wine and classic potables while luxuriating in the great ambiance they dreamed up for you.