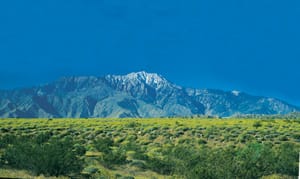 Credit journalists for a brighter, albeit mercurial Sun

Nobody can figure out why, but the last weeks of a dying year often randomly reveal a handful of desert institutions at either their most admirable or their silliest, and sometimes at both simultaneously. The list always varies, but in November and December 2006, the spotlight pointed to The Desert Sun and Palm Springs City Council.

We’ve had our fun with the Sun over the years, but this time we’re more inclined to praise than blame. True, in late fall the newspaper ran a singularly unconvincing investigative report purporting to prove that illegal immigrants put more into the public treasury than they pull out of it. One sensed that the piece was written to please politically correct editors — that its data, highly selective and repeatedly unsourced, were chosen to support a predetermined finding. Far more sweeping and compellingly documented studies reaching the opposite conclusion were simply ignored. In fact, this effort proved nothing, though we doubt it did any great harm. The bias was too obvious; Sun readers themselves remarked on it.

If the immigration inquiry was a turkey, the paper more than compensated by publishing a four-part December series on the soaring costs of public employee retirement packages. They are rapidly becoming a hideous statewide problem, but Sun writers Keith Matheny and Erica Solvig sensibly kept their report’s focus on desert cities and school districts.

This is an elephant-in-the-room topic of which most citizens are blissfully unaware and on which the Sun to its credit has finally broken its own silence. Whatever (in our opinion) were the series’ deficiencies — a frustrating inconsistency in reportage clarity, ignoring certain elected councils/boards that legally but covertly receive the same publicly funded post-retirement medical benefits, etc. — they were trumped by its essential message: that public employee pension packages are a building fiscal tsunami likely to devastate local government services.

Similarly, very much to the Sun’s credit was its choice for Person of the Year 2006: Riverside County Supervisor Roy Wilson, whom virtually everyone cheers. He has been the valley’s (and east to Blythe) man in Riverside since 1994, has faced no credible electoral opposition since then, and is now beginning his fourth term more respected, if possible, than when he began. His quiet, self-effacing yet intensely knowledgeable efficiency sets him apart from garden-variety politicians.

The Sun’s Person-of-the-Year editorial particularly credited his leading role in creating and pushing adoption of the vitally important, all-inclusive valley Multiple Species Habitat Conservation Plan. As background, it cited his long service on Palm Desert’s city council and as a “former College of the Desert educator” (journalism professor, actually), but curiously omitted noting that Dr. Wilson is also the author of a mass-media textbook currently used in hundreds of communications departments at universities and colleges across the country. The Dec. 18 editorial stated that “[Wilson] was an easy choice.” Indeed.

In a different editorial five days earlier, the Sun fervently urged the city of Palm Springs to become “promotional sponsor” of the Bob Hope Chrysler Classic golf tourney. With great enthusiasm, the city council unanimously agreed at its meeting the next day to do just that. In return for staggered payments totaling $700,000 over the three-year life of the contract, the city got a 60-second “vignette” aired 10 times during January’s tournament, mention by commentators, name placement next to the Classic logo, and lots of other swell stuff. The overall purpose, of course, is promotion of the city’s chief industry: tourism. There was no open public opposition.

Still, if it’s such a great idea, why didn’t one of the midvalley cities where the Classic has actually been played for 48 years grab it? They could have, but declined. According to the International Herald Tribune, TV viewership hemorrhaged 56 percent in last year’s Classic, when it was still being aired by CBS Sports. The Golf Channel now televises the event, hardly a CBS equivalent. Oct. 10’s Tribune quotes Australian Greg Norman: “With fewer and fewer people watching golf in America, the sport has become stagnant.” In part, he blames the fans’ obsession with Tiger Woods — who, incidentally, dislikes the Classic’s pro-am format, and refuses to play in it. Tournament management is doubtless doing its best to cope with increasing troubles, but with what success? It may be that Palm Springs’ new commitment is less important than it seems.

At that same pre-Christmas city council meeting, members heard the Human Rights Commission’s “Hate-Free City” (for some reason retitled “Not in Our Town”) proposal in its final form. It was confusing, but apparently boiled down to (1) educating the ignorant citizenry about the importance of “diversity” and (2) exposing and punishing resisters, thus giving the HRC’s proposal an authoritarian, even fascist, tint.

These tasks would be administered by something called the Community Action Committee — a name that carries a whiff of the French Revolution’s Committee of Public Safety, presumably minus the guillotine — and the cops. Nobody explained how the police can enforce CAC-approved speech and behavior parameters without violating an alleged miscreant’s First Amendment rights. But then, muddled proposals tend to beget muddled presentations.

Fortunately, in one of his finest official moments, Mayor Ron Oden verbally zeroed in on the Community Action Committee’s membership and discovered it to be the opposite of diverse. How ironic. In so doing, he effectively wrecked the proposal at least temporarily. Some supporters say it is dead. Others promise they’ll be back. As Churchill once remarked, “The trouble with fanatics is that they can’t change their minds, and they won’t change the subject.”

Unless you’ve just emerged from a coma or perhaps a prolonged stay on another planet, you must be aware of the faux documentary Borat: Cultural Learnings of America for Make Benefit Glorious Nation of Kazakhstan, last fall’s surprise movie box-office sensation. Perhaps you’ve even seen it and agree with all the critics that it is the funniest putdown of American cultural foibles. The chattering classes haven’t been so united on a single point since they read about (rather than actually read) Al Gore’s book asserting that we are all hopelessly doomed unless we reverse global warming by next Tuesday.

Ordinary Americans across the country furnished the unsuspecting fodder for the film — entirely created, inspired, written, etc., by Brit Sacha Baron Cohen, who plays the title role of wacky Borat Sagdiyev — and typically took their enthusiastic East European visitor and his documentary at face value, bent over backwards to be helpful in the face of extreme provocation, and seemingly bought into almost anything he did or said, no matter how outrageous. They also signed releases without a qualm. And so, when the edited film portrayed them as unthinking, idiotic, or worse, it was too late. Many are furious and some are threatening to sue. Meanwhile, audiences at home and abroad roar with glee at their discomfiture.

To us, it’s a mystery why none of the subjects suspected a scam. Well, it turns out one did. Los Angeles Times staff writer Tony Perry discovered that the Imperial County Sheriff’s Department nailed that same bogus Borat whose bonafides nobody else ever doubted. The sheriff had agreed to cooperate with a Kazakhstan reporter supposedly “comparing modern, humane treatment in U.S. jails with the brutal conditions in his homeland” and accordingly gave Borat access to the county jail. But when Borat (on camera) began posing as an arrested illegal alien, a false identity that no authentic documentary-maker would ever claim, an alert deputy sheriff quickly terminated the shoot. The sheriff himself ordered the film crew out of his jail and promised a lawsuit if any footage shot there was used in the final film. It wasn’t.

Let’s hear it for our not-easily-fooled neighbors in the Sheriff’s Department of Imperial County — who know when the emperor has no clothes and have the guts to say so.

To a greater or lesser degree, every contemporary U.S. city has a homeless problem. Proposed solutions are always contentious — inevitably attacked as either too harsh or too permissive, according to one’s point of view. Nowhere of late has this issue created greater tension than in San Francisco, where that city’s cherished tradition of accepting all comers clashes daily with its practical need for public order and basic hygiene.

An early December Associated Press analysis of reform efforts there cited (without comment) a creative new panhandling technique involving “transients like the young people in tattered black sweatshirts who sat on a street corner in the Haight with leashed pit bulls recently, asking for change. ‘You can get around by the kindness of people’s hearts,’ said Jaclyn, a 25-year-old who would only give her first name.”

Very wise of  “no last names, please” Jaclyn. Expert panhandlers like her have keen instincts for staying out of the pokey. When they’re actually running a de facto protection racket, for instance, crediting “the kindness of people’s hearts” to explain their daily cash haul is difficult to disprove in court.

Hmm … pit bulls. Leashed, of course. But as the marks well know, leashes are fragile. They break or are inadvertently dropped, especially when their owners don’t rake in all they’re asking. So it’s silver you want? Maybe some bills? You got it. Just hang on to those leashes, for gawdsake. Nice doggies. Clever Jaclyn and her pals know that pit bulls straining at leashes are powerful persuaders.

Fortunately, street people here in our valley would never resort to intimidation. This is all happening way up north in San Francisco. It has nothing to do with us. Right?

Mere weeks after winning easy re-election to his final term, 64th District Assemblyman John Benoit (R-Palm Desert) officially filed his intention to run for the seat held by 37th District state Sen. Jim Battin (R-La Quinta) when the latter is termed out in 2008. The GOP primary there will likely determine the ultimate victor, so others are sure to enter that race. Perhaps they’ll include 80th District Assemblywoman Bonnie Garcia (R-Cathedral City), another ’08 term-out. An unintended consequence of term limits is this game of musical chairs, where electeds now routinely swap legislative seats in Sacramento. Don’t blame Mr. Benoit. Blame the system.

The Agua Caliente Band of Cahuilla Indians plans to tear down its 228-room Spa Resort Casino Hotel in Palm Springs and replace it with a 420-room hotel — making this one of the city’s largest — including showroom, spa/fitness center, and parking structure. Assuming ratification of the new Indian gaming compacts, the tribe also will expand its casino and eventually add a 120-room boutique hotel and retail-restaurant complex. This is a very big deal for the city. And it is huge for the tribe, especially in tandem with its Rancho Mirage casino and new hotel. True, folks will miss the old Spa Hotel, for years a Palm Springs landmark. But they’ll get over it.

The opinions expressed in the Valley Observer are those of Hank Stokes. You can reach him in care of Palm Springs Life.