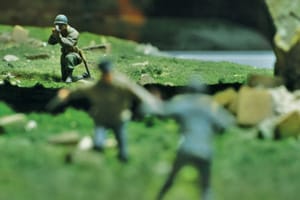 In a refreshing burst of common sense, politics stayed local

Let’s give credit where it’s due: Palm Springs City Council members deserve a round of applause and at least two cheers for refusing to trivialize their jobs. Yet that could have happened easily at their Feb. 21 meeting. Councilwoman Ginny Foat had placed a resolution on the agenda opposing the troop buildup in Iraq, and city-watchers like us expected it to pass. But it didn’t.

It didn’t even come close.

The Desert Sun mistakenly reported that the measure lost by a 4-1 vote. Its defeat was worse than that: There could be no vote because the motion received no second. True, after an impassioned speech, Ms. Foat had duly moved to approve. But to her all-too-public consternation, nobody seconded it — nobody — not even her usually reliable political sidekick, Mayor Pro Tem Steve Pougnet.

Every councilmember still had plenty to say, mind you. (Other than Calvin Coolidge, who’s ever heard of a silent politician?) No one explicitly supported the troop “surge” and several strongly criticized it. But in a refreshing burst of common sense, four of the five agreed they had not been elected to debate foreign policy. During the public hearing that preceded this council non-vote, one citizen had read into the record that morning’s tersely on-point Press-Enterprise editorial. It concluded, “[Palm Springs] faces a range of homegrown challenges, such as boosting the local business climate and protecting desert habitat. … The council should focus on such duties and leave foreign policy to the people who actually decide it.”

In their pre-vote remarks, each of the four employed similar reasoning. A Press-Enterprise report quoted Councilman Mike McCulloch: “I cannot in good faith stand up here and say, ‘Yes, the city of Palm Springs is against the escalation of the war in Iraq,’ because the entire city is not united in this effort.” Ever the pragmatist, Mr. McCulloch also noted that the publicity surrounding this resolution’s passage would inevitably hamper tourism — Palm Springs’ economic lifeblood — by turning off dissenting potential tourists and convention planners. All valid points.

Still, this being present-day Palm Springs, you just knew the city council couldn’t get through the evening without doing something silly. Sure enough, perhaps to atone for his apostasy Mr. Pougnet moved that a council resolution be prepared to support reducing U.S. energy needs through individual sacrifice, with Palm Springs residents leading the way. How nice.

As we write, we haven’t a clue what specific ideas his resolution will ultimately push — Get a bike? Walk? Think cool thoughts in the summer? — but odds are they will be unoriginal, impractical, and of course ignored. Mr. Pougnet’s pious motion did, however, pass 4-1. Only Mr. McCulloch voted “no,” but then he didn’t need to patch things up with a still-smoldering Councilwoman Foat.

Cathedral City Councilman Greg Pettis has long been a bitter critic of Wal-Mart — beginning several years ago with the retail giant’s announcement that it would close its out-of-date Cathedral City store when it opened huge new Supercenters in Palm Desert and Palm Springs. Not only have all those events now happened, but also Cathedral City has lost its Wal-Mart-owned Sam’s Club to a far larger Palm Desert replacement.

Given hits like those on their municipal sales tax revenue, no wonder noses are still out of joint in Cathedral City. But Mr. Pettis goes beyond mere regret or even resentment. He truly detests the world’s biggest retailer. And so, with another desert Supercenter unit now planned for Indio, he has been holding a series of anti-Wal-Mart town hall meetings in the East Valley. Predictably, electeds and non-electeds alike in Indio City Hall are not amused. To no one’s surprise, they think he should mind his own city’s business, not theirs.

But you have to look at this from Mr. Pettis’ point of view. He is a very ambitious man. He desperately wants to be the Democratic nominee to succeed 80th District Republican Assemblywoman Bonnie Garcia when she is termed-out in 2008. The creatively redistricted 80th was to have been Mr. Pettis’ ticket to Sacramento back in ’02. But instead, he was swamped in the primary by Joey Acuna, who in turn was edged by Ms. Garcia in the November final.

Mr. Pettis plainly hopes that bashing Wal-Mart will help restart his long-stalled political career. He sees, or purports to see, this merchant Leviathan as an evil exploiter of the public in general and its own employees in particular. It’s certainly true that defiantly non-union Wal-Mart and a frustrated United Food and Commercial Workers Union are mortal enemies. To a motivated politician like Mr. Pettis, the latter is a natural ally. He presumably figures that cozying up to the UFCWU will garner union support (and money) for his impending campaign. Perhaps so, but beyond that, can his outspoken political opinions on this subject help him win a significant number of votes?

We doubt it. Frankly, there’s little evidence that the so-called “Wal-Mart issue” resonates in the minds of ordinary people hereabouts. Valley consumers — a.k.a. voters — are too busy buying up a storm at its three desert stores, where the parking lots are perpetually jammed.

In national terms, Wall Street has recently regained its bullish take on Wal-Mart: Although the company’s same-store 2006 sales were only modestly ahead, profits in the crucially important holiday quarter greatly exceeded expectations. Meanwhile, an annual national survey commissioned by Canada’s respected Business Magazine once again rates Wal-Mart among the “50 Best Employers in Canada.”

So except for Mr. Pettis, the union, and a core group of likeminded ideologues, who around here is left to hate Wal-Mart? And if 80th Assembly District voters won’t hate it, will they vote for the man who says they should? Stay tuned.

Regular readers of this column know that from time to time we discuss books. You also know that our books seldom have anything at all to do with the desert, which is irresponsible, and that they tend to be highly idiosyncratic, which is just weird. Ah, well … these musings are prompted by our recent discovery of an entire new series of historical novels by one of the English language’s best and most prolific authors. He is Bernard Cornwell, described by The Washington Post as “perhaps the greatest writer of historical adventure tales today.”

We agree — and then some. We hang on his plots like bookish kids once did those of Anthony Hope, Robert Louis Stevenson, or Conan Doyle (The White Company, not Sherlock Holmes). That’s not to say Mr. Cornwell writes what used to be called “boys’ books” — although we’d guess that his millions of readers are about 90 percent male. His stories are about war, after all, about soldiering long ago and far away. How long ago? Try late 9th century England, barely emerged from the Dark Ages and being fought over by King Alfred the Great’s Saxons and the Danish (Viking) invaders.

Collectively, the author calls these novels The Saxon Stories. They are our recent discovery, with three books published since 2004 and one more to come this fall. The central character is Uhtred, a dispossessed Saxon warrior raised by Danes, who thinks Alfred is a fool but keeps getting trapped by circumstances into fighting for him anyway. Uhtred is both ferocious and smart. He needs those assets to extract himself from the awful fixes he frequently blunders into. He is crass, insults almost everybody and, though he’d bite our head off for saying so, is also a deeply honorable man.

In fact, Uhtred is a lot like Mr. Cornwell’s most famous character by far: Richard Sharpe of the 95th Rifles — the famous “greencoats” — and the fiercest soldier in Wellington’s army. In a 20-book series, Mr. Cornwell takes Sharpe from a “scum of the earth” illiterate British private in colonial India (c. 1800), where he learns to read and first meets almost the only officer he totally respects: Col. Arthur Wellesley, the future Duke of Wellington. Then comes a battlefield commission and breathtaking exploits during the years-long Peninsular War against Napoleon’s armies in Spain and Portugal, where Captain and then Major Sharpe performs prodigies of valor and dazzling tactical improvisations, repeatedly falls in love with the wrong women, and finds and loses small fortunes. Finally, Col. Sharpe, just as bloody-minded as ever, leads his battalion to save the day at Waterloo in 1815.

Apart from the writing itself, the Sharpe series displays extraordinary research. We’re something of a buff on that period of military history, with a particular interest in the Peninsular War, and we’ve yet to catch the author in even a small error of fact. The framework for his story line is brilliantly simple: Sharpe’s career is linked to that of Wellington, his quasi-patron and polar opposite in all things except brains and character, who briefly appears at critically important moments in almost every book.

We said Bernard Cornwell was prolific. He is practically a one-man industry, averaging two novels a year since he began writing professionally some 25 years ago, including a four-book American Civil War series and many more. Even so, with 12 million Sharpe books sold worldwide — plus a forgettable TV series starring Sean Bean as Sharpe — that canny rifleman is unquestionably Bernard Cornwell’s supreme creation.

Riverside plans to build a new electricity-generating plant for its city-owned power system, which it says is necessary to handle the expanding customer base. The new plant will minimize air-polluting emissions, but it cannot entirely eliminate them. Yet, South Coast Air Quality Management District may pass rules that bar new power plants anywhere in the heavily polluted Inland Empire. That’s us, folks! The AQMD knows our bad air is mostly imported from Los Angeles, Orange, and San Diego counties — thanks a bunch — via prevailing winds. If Riverside can’t build its plant, users there will face rolling blackouts by 2009. Can we be far behind?

To no one’s surprise, November’s hotly contested city council race to fill one open seat in Palm Desert set a combined spending record. For many years, council campaigns there typically cost well under $10,000. But according to final campaign finance reports filed by Jan. 31, candidate Cindy Finerty spent almost $60,000 to win, and chief opponent Sabby Jonathan spent nearly $80,000 to lose. These numbers almost certainly presage what’s to come in Palm Desert. But they pale compared to Palm Springs, where a credible council race in this fall’s election will probably cost about $150,000. And to be elected mayor, add at least another $50,000.

Correction: Last month’s commentary on the Palm Springs political scene mistakenly referred to an unnamed city council member as “now the mayor pro tem.” The council routinely rotates that title. The intended reference was to Councilwoman Ginny Foat, who is now a former mayor pro tem.

The opinions expressed in the Valley Observer are those of Hank Stokes. Contact him in care of Palm Springs Life.