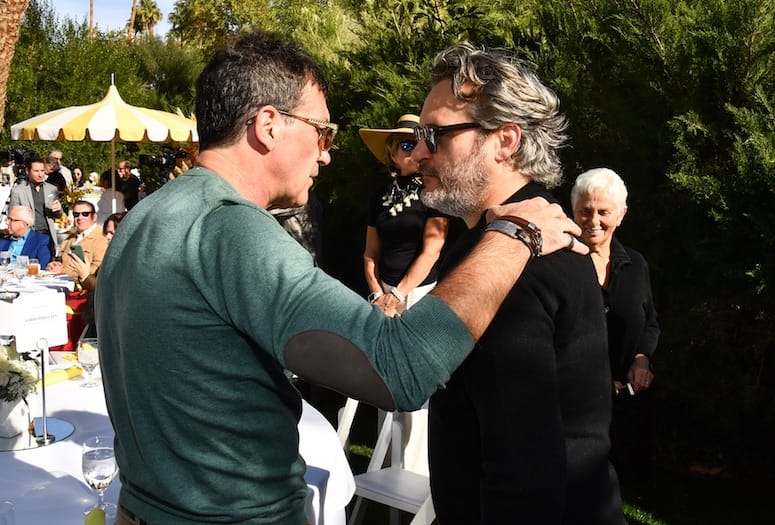 Antonio Banderas and Joaquin Phoenix chat during the Variety Brunch on Jan. 3 at the Parker Palm Springs.
PHOTOGRAPHS COURTESY VARIETY

Variety put the spotlight on acting, directing, and producing with its annual brunch held during the Palm Springs International Film Festival, sponsored by AT&T, at the Parker Palm Springs.

De Niro, a two-time Academy Award winner, stars as Frank Sheeran in Netflix’s The Irishman directed by Martin Scorsese. De Niro will be honored with the highly prestigious Screen Actors Guild’s Life Achievement Award in addition to being nominated for Best Ensemble on Jan. 19. The film has been nominated for four Golden Globes and was named the Best Film of the year by the National Board of Review, New York Film Critics Circle, and was named one of the 10 best films of the year by AFI.

Phillips directed Joaquin Phoenix in the film, The Joker, which has already taken in $1 billion at the box office. The film has been nominated for foru Gokden Globes including best picture, best actor, best director, and best original score.

Waithe is the screenwriter and producer of Universal Pictures and Makready’s Queen & Slim, directed by Melina Matsoukas. The film received the Impact Award and was listed as one of the top 10 Best Films of the Year by the African-American Film Critics Association.

PHOTO GALLERY: Check out these moments from the brunch.