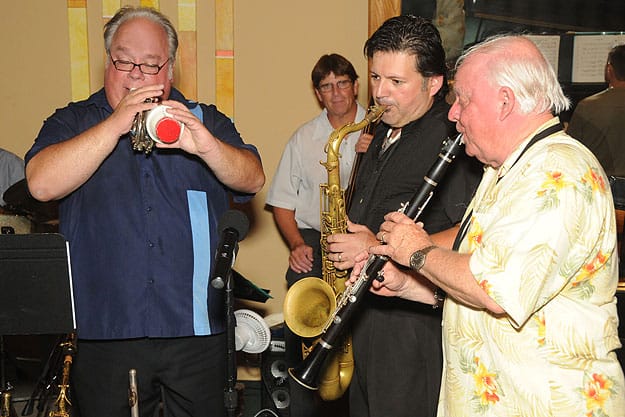 This year’s run of Sunday afternoon jazz at Vicky’s of Santa Fe closed with a celebrity-packed house and the usual tribute to talented local music students, all accompanied by the jazz band that has been a staple of the venue’s entertainment for 7 years.

Debby Boone, as she has for five years, was on hand to put the “bow on the package.”  The audience was treated to a preview of her new EP Album and show titled “Swing This” which was inspired by her childhood years immersed in the Las Vegas “Swing” culture of the ‘60’s while traveling with her father, Pat Boone.  Some of the songs she sang, included “Sing, Sing, Sing,” the classic Benny Goodman hit from his Carnegie Hall concert of 1938, the Dean Martin hit “Everybody Loves Somebody Sometime,” and the Nancy Sinatra tune “These Boots Were Made for Walkin’.”  The last tune illustrated with 60’s camp and wit by the costume that Debby wore.

Two outstanding students were honored for their accomplishments in music.  Molly McAuliffe, a drummer who will attend Palm Desert High School in the fall, has received a Young Artists Scholarship for two weeks of study at the Idyllwild School of the Arts.  Matthew Aquino, a bass player, attends Cathedral City High School and is the first recipient in our area of a scholarship from the mentoring program of the Los Angeles Jazz Society, which is expanding its free music education programs to the schools of the Coachella Valley.

Enjoying Ms. Boone’s show and the outstanding band that accompanied her were a number of celebrities.  Joey English, who will be the featured entertainer with the band on opening day of Sunday jazz next October 6th, was cheering on her fellow musicians.  From Europe, international vocalist/guitarist/dancer and a frequent performer in the US, Caterina Valente and her son Eric Van Aro, a singer and music producer, were in attendance.  Also spotted were producer Perry Cross, who produced the Johnny Carson Show and many others in New York; Meredith Asher the widow of William Asher, who produced “I Love Lucy,” “Bewitched” and the “Dinah Shore Chevy Show”; as well as jazz vocalist Carole Hampton.