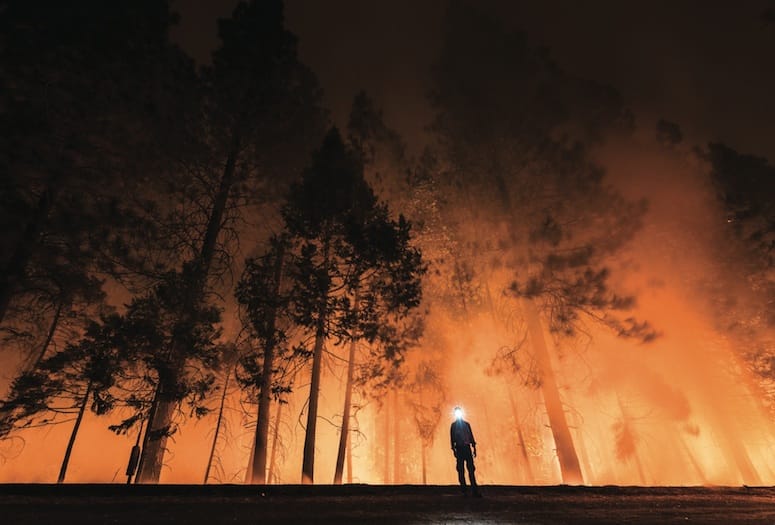 “When I get news of a big fire I drop everything, drive somewhere for six hours, shoot all night, and try not to get killed.”
Photo by Jeff Frost

Predictable is not good raw material for an artist. Let’s say you are from Utah and you move to California to pursue your dream of becoming a rock star, and if that doesn’t work out, at least work in the music industry.

Let’s say you rearrange your creative energy and become a photographer. Years later, sound marries image, and you’re making art to a live soundtrack provided by uber–rock band U2.

That’s the story of Jeff Frost, a musician who played on L.A.’s Sunset Strip before moving to Yucca Valley and establishing a successful career videographing wildfires and urban riots. Members of U2 saw his work, and they hired him to create the visuals for their Innocence + Experience tour 2015. Palm Springs Life talked to him about crafting an artistic vision.

What inspires you?
There’s a few photographers. There’s a lot of painters. I love the abstract expressionist movement. Then, there are filmmakers — David Lynch especially. What influences [my work] on a day-to-day basis is the mood I’m in, or an idea I keep tumbling around in my head like a rock, and it starts getting more and more polished. The desert definitely influences my work, as well. People’s environment [has] much more of an influence on them than they think.

Do you have a certain creative process?
It depends on the project, actually. The way I got started was by exploring the desert aimlessly. I would find an abandoned building, and then … I would set up camp there and paint large-scale optical illusions on the inside walls. As for my videos, they incorporate some stop-motion and time-lapse photographs of riots, wildfire, and stars. Basically, I’m acquiring all these chunks and building blocks out of photographs for films that I am going to make. It’s just as much painting as it is photography as it is filmmaking as it is music. Since I used to be a musician, I make my own sound tracks and do all the sound design.

What’s up with you and fire?
I get a lot of comments that I must be a pyromaniac. … [W]hat motivated me was climate change, and seeing the planet warm up and fire activity increase. I accidentally ran into a wildfire … in one of my earlier films called Flawed Symmetry of Prediction. … I had no training. I didn’t have a press pass or any protective gear, so I was well outside of the checkpoint, but I could still shoot a mountain on fire. I looked around online, and there was maybe a couple videos of wildfires. I realized nobody had really done much with this, not from an artistic perspective. Plus, I’m very concerned about climate change, so I want to put the fire right in front of people.

How can you possibly prepare to shoot a fire?
During fire season … they alert me when a fire is somewhere in the state. As soon as one is big enough, I literally drop everything I’m doing, jump in my truck, and go. A lot of the fires in the last two years have been in central and northern California. When I get news of a big fire I drop everything, drive somewhere for six hours, shoot all night, and try not to get killed.

You’ve shot 20 wildfires. Which one scared you the most?
By far, the Valley Fire [in Sonoma, Lake, and Napa counties, fall of 2015]. I heard about Middletown burning down; I was already shooting another large fire about three hours away. Driving into that scene was one of the most surreal things I’ve ever seen in my life. There were cars smashed along the road … there were multiple buildings all across town … on fire. There were giant propane tanks exploding, which would light the sky up green even through all the smoke. There were power lines down everywhere like spaghetti. My heart was just thundering … houses on fire everywhere and it was just total chaos. In some of the houses there were live ammunitions. At one point everybody had to go run and hide behind the fire truck, because all the ammo was going off and no one wanted to catch a stray bullet.

Fire is dangerous, but also beautiful. Photographing a riot must be completely different.
The Anaheim riot is when I figured out I could essentially go around chasing news events and use that as raw building blocks to create art. I used to call it creating nonrealities out of reality. It broke out in 2012 … when I was a poor art college student. The cops … shot a Hispanic guy who was running away from them, and he went down on his knees and they shot him in the back of the head. He was unarmed. The community, later that night, was protesting on the street corner. Somebody lit a dumpster on fire, but most of it was pretty benign. The cops showed up, and they sprayed the crowd with rubber bullets, and all hell broke loose. … Ten days of rioting in Anaheim followed, and I shot the whole time. It … started out as this very visceral, honest reaction to an excessive police force.
Q What is the event that you wished you had documented but never had the chance to? A The shuttle Endeavour  [being towed] through the streets of  Los Angeles.

U2 discovered your work online; they invited you to do visuals for their tour. Business as usual?
I thought that they were just going to want to use my content in whatever way, but they actually wanted me to come up with the look for certain songs. I was very happy, because I got to do two [songs from the] Joshua Tree [album], “With or Without You” and “Where the Streets Have No Name.” Those are two of my favorite U2 songs ever.

What was the biggest challenge on that tour?
You would think a rock band of that size would be more organized, but they’re still a rock band. … You get a call a week or two before you’ve got to go do something. … [Y]ou get to work 16 to 18 hours a day. The main challenge is just the deadlines.

Dish some gossip about the band …
I made a book of my last project [and] … did some actual paintings on the inside covers of one copy and took it to The Edge’s house in Malibu …. He and his wife sat down with me and went through the entire book and asked me questions about it. … They could have just said, “Just mail it to me.” … [N]ow that I’ve worked for U2, people come to me and they tell me crazy things they’ve heard. I asked him if Bono had bought the Joshua Tree Airport, which is something I’ve heard multiple times. He said, “No.” Then he said, “Wait, maybe. I don’t know.” … I heard another one that The Edge has 30 guitars, and they’re restrung every single day. … He was like, “No, they’d go out of tune. You can’t restring a guitar that much.”

Who would you like to see at Coachella this year?
Guns N’ Roses, because they’re getting some of the original lineup back together.

What desert artists and musicians do you follow?
Lucid Stead by Phillip Smith [an art installation near Joshua Tree] was pretty fantastic. High Desert Test Sites [a nonprofit immersive experience organization] has some great stuff going on. … [The] desert music that I love is by the Queens of the Stone Age. That’s one of my favorite bands ever. The Eagles of Death Metal are a fantastic band, too, and I hope they make it past the trauma in Paris. They closed out U2’s very last show of the tour in Paris. I wasn’t there for that one, but I was amazed [they]got back onstage that soon after that act. Their bravery just astounded me.

What music do you like that would shock us?
I love Madonna’s “Erotica” and Lady Gaga’s “Paparazzi.”