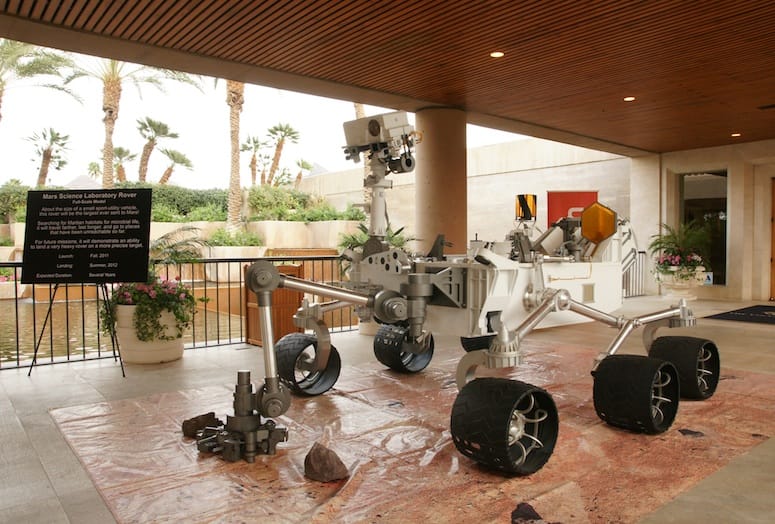 A full-size replica of the Curiosity Mars Land Rover greeted members outside the clubhouse at The Vintage Club in Indian Wells.
Photos by Gregg Felsen

Members of The Vintage Club recently took a voyage into space led by a pair of the country’s leading scientists during the Vintage Forum speaker series offered exclusively at the Indian Wells private country club.

Vintage Club member Kent Kresa, a Caltech Trustee and honorary chair of Caltech’s Space Innovation Council, gave a brief testament to Caltech and JPL before introducing Elachi and Grotzinger. Both scientists skillfully took the audience on a space odyssey by demonstrating the accomplishments and importance of space exploration, and the discoveries made with the Curiosity Mars Land Rover over the past 11 years. • Mars is approximately one-quarter the size of Earth depending on type of measurement.

• Mars’ atmosphere is thinner than Earth with huge temperature ranges.

• The geological landscape of both Mars and Earth are very similar, featuring polar caps, canyons, desert-like topography, and even a volcano. While the topic of astronomy and planetary science can be daunting for many, Elachi and Grotzinger engaged the audience with anecdotes and incredible imagery that easily explained the scientific concepts discussed.

For example, they likened the difficulty of landing the rover to a golf  “hole-in-one," imagining a scenario where one might tee off at The Vintage Club while aiming at the cup of another famed course at St. Andrews in Scotland.

They encouraged guests to envision making a hole in one from this distance — while the cup was moving. The analogy hit home and was the perfect illumination to shed light on the daring task of landing on Mars despite distance, atmospheric, and surface challenges. A film covering the intense nature of the last minutes prior to actually touching the Rover down on Mars also showed the precision required and the “no room for error” efforts by JPL and Caltech teams.  The film depicting what was characterized as “America’s Point of Pride” excited the crowd by clearly demonstrating the importance of this amazing feat. • The creation of the spacecraft, Curiosity, was to seek out new life and try to answer the natural question: Are we alone in our Universe?

• The Rover is 99 percent fabricated in the U.S. (including the electronics)

• The Rover uses a powerful laser to analyze rocks for signs of organic matter, exploring the possibility of a past or future water source on the planet.

The event is part of the Vintage Forum, “Inside Stories of Industry Leaders,"  a speaker series offered exclusively to Vintage Club members.