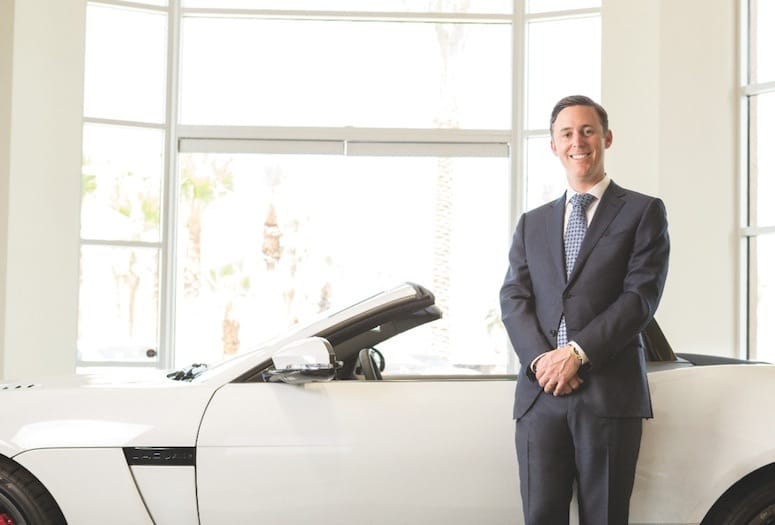 Kelly Wolf is chief operating officer of indiGO Auto Group, which represents 14 dealerships throughout the U.S., including its Desert European Motorcars campus in Rancho Mirage.
PHOTO BY ETHAN KAMINSKY

The bright, fun vibe that permeates Greater Palm Springs surprised Kelly Wolf when he arrived four years ago with the new ownership of indiGO Auto Group’s Desert European Motorcars in Rancho Mirage. It’s a spirit he sees at work, in the community, and now in his own family.

“My wife and I have two little girls, a 9-year-old and a 6-year-old, and we love the desert,” he says. “We hike in the morning and hang out by the pool in the afternoon. There is so much for families to do.”

“Last November, we opened a new Jaguar Land Rover facility, doubling our capacity to show and service these brands. The sales experience and service experience here are second to none.”

Since Wolf and CEO Todd Blue took charge, they have focused on local customers rather than visitors.

“That has almost tripled our sales,” Wolf says. “We never know who’s coming through the doors. We have celebrities, business icons. Every day I meet someone new and interesting.

“What’s cool about the area is the young people attracted to the valley for its architecture and Coachella [Valley Music and Arts Festival]. They see what the valley has and realize this would be a cool place to raise a family, to get out of L.A or out of San Diego. This is a tight community, and that’s hard to find in Southern California.”