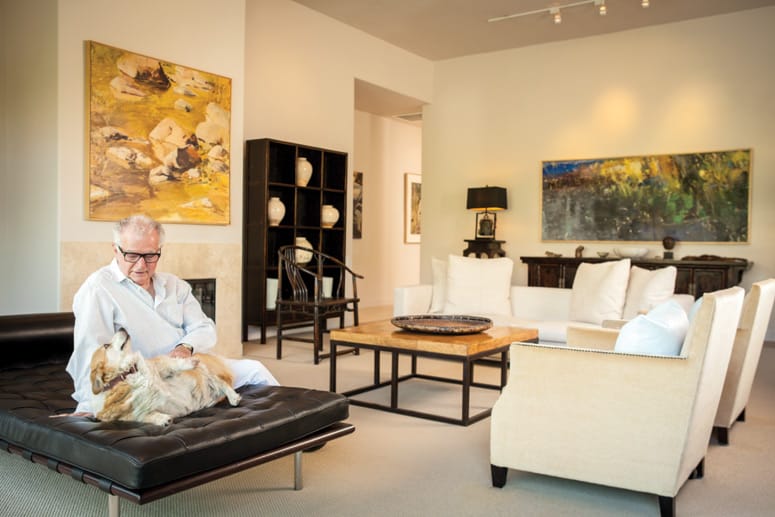 Forrest Moses calls color a seductress. “I didn’t want people seduced by the color [in my work],” he says. “I wanted the subject matter to seduce them, and have the imagery speak to them.” So began Moses’ nearly five decades of full-time work as a painter of abstract landscapes that, in the early years, were primarily shades of gray, black, silver, and blue. A pop of green, a smudge of magenta on bold swaths of orange and yellow came later. “I introduced more color for change,” he says. “I’m inspired by the transition from fall to winter. The change is stimulating, and the energy is almost erotic.”

This isn’t your Grandma Moses, whose career painting folksy American farm life began when she was almost 80 years old. At the age of nine, Forrest Moses, no relation to Grandma, says an art class where he grew up in Danville, Va., gave him a sense of identity. His first pastel still lifes were so good that his relatives framed and hung them in their homes. Although a fine arts degree from Washington and Lee University and study at the Pratt Institute in Brooklyn followed, Moses doesn’t call himself an artist: “That title must be given to you from the outside. I’ll always introduce myself as a painter,” he says, a Southern lilt framing his words.

“Magic is in the landscape elements,” he says now of his surroundings, spending half the year in an adobe home in Santa Fe and the other half in a Moroccan contemporary along the El Mirador corridor in Palm Springs. Water draws him, from the Santa Fe arroyos to the waterfall in Tahquitz Canyon, and bringing reflections to life on canvas gives him the most satisfaction. “The spirit of the work doesn’t belong to you; it’s a gift,” he says. “You can’t take pride in that — you can be grateful.”

Painting techniques inspired by masters such as Cezanne, Monet and Matisse, plus contemporaries Richard Diebenkorn and Cy Twombly, underpin his art.

“His (gift) is the ability to evoke rather than depict, to conjure the experience of being in nature rather than simply a picture of it,” says Larry Brown of LewAllen Galleries in Santa Fe, N.M. “Many people from around the world, both urban and rural dwellers, are drawn to the simplified yet sophisticated forms of nature distilled masterfully in his paintings. His art is the visual poetry of a gentle man … in his visual meditations on the land, his paintings embody our own memories.”

Before boar-bristle brush touches canvas, it all starts with a photograph. “Instead of sketching all day, I use a camera,” Moses says. “I don’t copy the image, but it gives me format, composition, and subject. I use many things to paint — including sticks and rags. I like to wipe things down and scrub things out to end up with an effect that takes me where I want to be.”

While he works, smooth jazz carries throughout the house and Bobby the cat, a part-Mankoon who likes his soft gray ears stroked, and Billy, a mature, yellow-and-white rescued Corgi, nap nearby. Other than the music, there is silence. “Important information comes to me in the silence.” HOME IS WHERE THE ART IS
“This house was mature without showing any sign of deterioration or age, something we’d all like,” Moses chuckles about the Palm Springs home he purchased in 2010. Antique furnishings mix with what he calls the best original and reproduced midcentury designs. A Eero Saarinen granite-topped table with metal base is surrounded by Brno chairs in the living room. Above the table hangs a 150-year-old Baccarat chandelier. “My token to Liberace,” he laughs. “The house is so strong, the chandelier gives a playful levity to its serious environment.” A male torso in glass sculpted by Dutch artist Peter Bremers sits atop a nearby table. The view out the floor-to-ceiling patio doors includes a curved, steel sculpture by local artist Delos Van Earl that reaches downward, then skyward, as the bulky San Jacintos loom beyond.

In the kitchen, an earthy dining table with a naturally planed wood top is reminiscent of a Nakashima; Hans Wegner Wishbone chairs with curved backs and natural seats snuggle up to it. The sideboard is American, but evokes an Asian vibe — a style that Moses embraced (like a “call to attention,” he says) as a young Naval officer in Japan after the Korean War.

Moses says his home in Santa Fe is made for “meditation, yoga, and reading. I’m surrounded by meaningful artifacts that are Buddhist and Native American Indian.” The furnishings in Palm Springs may be less spiritual but are no less beloved, and the house’s large expanse of glass meets his needs. “The house here is open, clean, spacious and light, and it allows me marvelous walls to hang my paintings.”

THE ARTIST’S QUEST
A discussion of his life’s work soon gets down to semantics: “The difference between craft and art is that you have to learn the craft to get the work down, but the concept of art comes in through your eyes and through your spirit.” Does one’s ability to process those external cues equal success? “My work is to discover nature’s truth and give life to a painted image by understanding the rhythms and pulses behind appearances,” he explains. “Success is not just about money; it’s about getting what you want from the work itself.”

At 80 years old, Moses exudes a certain satisfaction that comes with embracing the land, his work, and his truth on his own terms. When asked what occupies him in the present, Moses smiles. “I’m just working,” he says, “and I always have a show at the end of the road.”