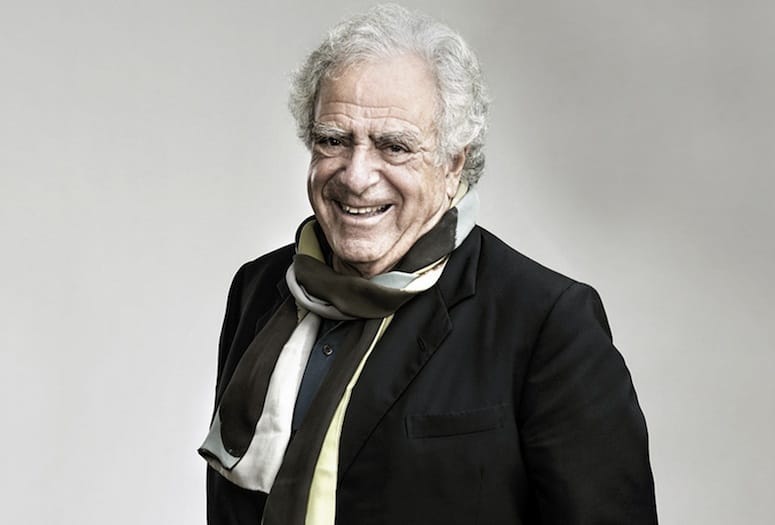 More than 60 years after he designed his first piece, his midcentury modern furniture is more relevant than ever and avidly sought out by modernist enthusiasts, collectors, and celebrities around the world. His pieces have been collected by Marilyn Monroe, David Bowie, Uma Thurman, Tom Ford, Angelina Jolie and Brad Pitt.

You may be familiar with his work, even if you don’t think so. If you went to Disneyland in the 1960s and stepped inside the House of the Future, it was Kagan’s modernist furniture that graced the theme park’s futuristic home. Walt Disney was a Kagan fan, also.

Born in Germany, Kagan immigrated to the United States with his family in 1938, escaping the Nazi horror that would soon envelope his country. Although he studied painting and sculpture in his early years, his passion would soon lean toward architecture and design. His elegant midcentury modern designs were inspired by nature and the Bauhaus movement, and his innovative pieces evoke a timeless, modern aesthetic unparalleled in furniture design. Vladimir's advice to today's designers: “Don’t be a snot. You are not what the world has been waiting for. Chances are it’s been done before.”

The 89-year-old designer, who lives in New York’s Upper East Side, recently spoke to Palm Springs Lifer.com about his upcoming visit to Modernism Week. He will participate in an intimate discussion with ELLE DÉCOR editor in chief, Michael Boordro, on Feb. 14 at the Annenberg Theater in Palm Springs.

Enthusiasm for midcentury modern architecture has been on the upswing for some years now, elevating Modernism Week in Palm Springs to one of the Coachella Valley’s most popular events. As an acclaimed designer of iconic modern furniture, why do you think midcentury modern designs – whether architecture, furniture or other décor – are in such demand in 2016?
“Simple answer is: What goes around comes around. But that is a glib escape from facing the question. Midcentury came after a prolonged period of drought. The negative effects of Prohibition. Then came the depression, unemployment, life’s ruined, despair, no future or optimism. There was an uplifting moment in Roosevelt’s New Deal. It gave hope and employment, but it was a digging out from misery. The world was ready for a rebirth and midcentury modern was one of the answers. (It) was the first ray of sunlight that hit this country in 30 years. It was blithe-spirited, colorful, exuberant. It was egalitarian; it addressed every man. It was not an elitist movement. It was joyful, a breath of fresh air after stagnation. And I was fortunate enough to start my career during those exciting years.”

How would you describe Vintage Kagan furniture?
“Vintage Kagan is the real stuff not the knock-offs! In truth, I did not consider myself as part of the post-war modern movement. Post-war modernism was in love with the machine and mass production. Think Eames, Nelson, and Herman Miller. I was concerned with craftsmanship, handwork, and quality. Trades my father had instilled in me. However, these are the designs that have survived and are as a viable today as they were 65 years ago when I designed them. Those are the Kagan Vintage of today.” You are known for your elegant midcentury modern designs yet modernists might be surprised to learn you call yourself not a “maximalist,” not a minimalist. How did a modern furniture designer become a maximalist?
“Correction, I started life as a died-in-the-wool Bauhaus minimalist. The Bauhaus was my bible: ‘Less is more. Form follows function. But, I was a collector. Anything I found interesting, I bought. When I married my wife Erica Wilson, we became gluttons. No trip was complete without a trunk-full of must-have designs and objects. This was a good thing. What we didn’t learn was to de-access. And so our home has become over the years an excellent example of more is more. Just don’t tell this to my minimalist clients!”

Where (or whom) do you get inspiration when you’re not feeling particularly creative and need to jump start your imagination?
“Nature is still my best inspiration. However, illusions sometimes trigger new ideas. Misapprehensions. Trompe l’oeil. I stare into space and see new images. Think of clouds, moving shadows, a vision through recognizable things suddenly creating a momentary vision. Sounds crazy? Much too complicated to explain except on a psychiatrists couch!”

What is your advice for today’s designers?
“Don’t be a snot. You are not what the world has been waiting for. Chances are it’s been done before. Get with it. Get practical. Do not try to reinvent the wheel. All that makes it very difficult to be creative. So go out and conquer the world.”

Have you been to Palm Springs before? What is on your “must do” list when you’re here.
“I’ve been there a hundred years ago when my host provided me with horseback riding. I took a cable car to the top of the mountain and saw great views. Wind Farms were just getting hot. The countryside must be flooded with them. I won’t recognize the place. It will be very exciting and as I am unable to go jogging, much less walk, I will look forward to meeting interesting people.”