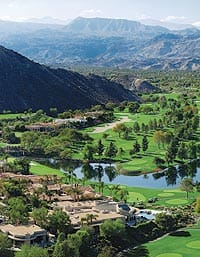 Benjamin Franklin once said that wine “makes daily living easier, less hurried, with fewer tensions and more tolerance.” No words could more aptly articulate why The Vintage Club deserves its venerable moniker. Members of the exclusive, 712-acre enclave, nestled in a natural cove at the foot of Mt. Eisenhower, enjoy a leisurely lifestyle in a tranquil and spectacular environment. This year, as the world-class country club celebrates its 25th anniversary, accolades for The Vintage Club continue to accumulate. Unique Homes recently listed The Vintage as a Development of Distinction and “one of the finest country club communities in the nation.” Moreover, Golfweek magazine named The Vintage among its Top 100 Residential Golf Courses in the World.

Indeed, the two outstanding Tom Fazio-designed championship courses are the lush centerpieces of the community; in fact, the homes surrounding the courses — roughly 475 residences — were developed as an adjunct to the golf milieu. The Mountain and Desert courses, as diverse as their names imply, encompass more than 400 acres of undulating greens, seamlessly blending diverse and verdant flora with native landscape. The expansive Mountain Course, built in 1979, lies adjacent to the mountain cove and emanates the dramatic features of Old World courses with its distinct patterning of pot bunkers, twisting moguls, and tee perches atop rugged rock outcroppings. Players find the apex of this course at holes 16 and 17. Interspersed with a series of waterfalls and lakes, these challenging   greens have tested the most intrepid   amateurs, as well as top pros like  Arnold Palmer and Gay Brewer during  the annual Vintage Invitational.

In contrast, the Desert Course, which opened four years later, features narrower fairways, sprawling sand bunkers, and native vegetation. Designed for aesthetics and playability, its challenging network of water features — requiring several aerial tee shots — can be intimidating. Writer and golf enthusiast Cal Brown says one of the love-liest settings on this course is at the par-3  No. 14, set within a majestic grove of native palo verde trees. Fazio, who is a Vintage Club member, visits frequently to ensure the courses are in optimal condition.

With 463 members, the courses are usually accessible; there are no tee times, and tournaments are typically played on one course, leaving the second available for open play. Both courses are meticulously groomed, and the staff and  service The Vintage Club provides are  par excellence.

“The service is something I have never experienced quite to the extent that I have here,” says Vintage Board President Jack Sage, a retired corporate executive. “We have a top-notch superintendent of greens, a fabulous director of golf, and service people who know all the members’ names. We also have a fine caddy force; most of them are assistant pros in the northern climes who come here to caddy during the season.”

For those who prefer to wield racquets instead of clubs, The Vintage Club offers an excellent tennis program, featuring 11 courts and stadium seating for 1,000; an active team of members competes in local tournaments. An Olympic-size swimming pool and state-of-the-art, 6,000-square-foot fitness center round out the slate of sports activities. The club also offers entertainment for the younger set, including an on-site children’s park and the activity-laden Kids Kamp, implemented over long holiday weekends.

Perhaps most distinctive are the active membership and enduring friendships forged, often immediately upon joining.

“It’s an equity club, so the members actually own it,” Sage explains. “Most people want to participate. We have 12 board members, and each heads up a committee — golf, greens, human resources, legal, fitness, tennis, social, membership, and more.”

Many Vintage members — men and women — are veritable “lions of industry” and represent a broad range of professions, including medicine, law, finance, and politics. With 19 members possessing the coveted Horatio Alger Award, the club’s entrepreneurial spirit hardly surprises. Members implement a variety of educational and social programs, including a Member’s Forum during which members lecture on their topics of expertise.

“We’ve been doing this [forum] for over four years and haven’t run out of speakers yet,” Sage says, “We have a few ex-ambassadors in the club, so we usually tap them for their experience.”

The focal point for many social events, including the popular monthly Ladies Guest Days (“women here have the best time of all the members,” Sage quips) is the 85,000-square-foot clubhouse, a contemporary sanctum of travertine marble facades and floor-to-ceiling glass. Designed by Fisher-Friedman, a San Francisco architectural firm, and renovated in 1997 by Warren Sheets Design (another Bay Area firm), the clubhouse is surrounded by five acres of lakes, inviting iridescent views of the mountainous backdrop.

The Vintage bond often extends off property. Members have chartered cruise ships and traveled to exotic ports from the Mediterranean to the Baltic. “It’s amazing,” Sage says. “You’re on there with 150 of your best friends.”

Another dimension to The Vintage Club, one rarely highlighted publicly, is philanthropic activity. Three years ago, The Vintage Club established an Education Scholarship Fund that allows employees and their children to pursue higher education opportunities.

“Through the generosity of our members, we now have 26 students in school, and we have raised enough money to start an endowment so that this education assistance will be assured in the future,” says Dianne Moss, one of the initiators of the program. Vintage members also have organized a charity auction, contributing items ranging from stays at vacation homes and antique cars to gift certificates, with members bidding enthusiastically.

Owing to the fact that it is an equity club, the membership process is stringent. “You must be sponsored by three different members and be under contract to purchase a residence to be eligible to go through the [membership enrollment] process,” says Pat Sargent, general manager of The Vintage Club. “Prospective members can view properties through The Vintage Club on-site sales office.”

The Vintage Club attracts 15 to 20 new members per year, and many are drawn by its unparalleled security, headed by former Secret Service member Art Allen, who has protected former presidents and foreign dignitaries.

At this 25-year juncture, members are aggressively upgrading, renovating, and strategizing for the future. The club has plans for additional amenities, including a full-service spa for members.

What many agree is so special about The Vintage Club are all the people who have been involved since inception: developers Mick Humphreys and Joe Seiger; Tom Fazio and his team that created the golf courses; a staff of nearly 300 that thrives on personalized service; and the members who have had to leap across a certain financial level to afford the lifestyle. “They’re usually at a point in their lives where they’ve made it. They think they’re lucky, they want to enjoy themselves, and there’s no preconceived ideas about anybody,” Sage says. “This is a friends-for-life thing.”

You would think that with more than 200 courses to his credit, golf architect Tom Fazio would turn to computers to implement his designs. But hand-penciled sketches are the norm for Fazio. “It’s more fun to do it by hand, by eye, by feel, by personal involvement,” he says. “I want machines to do things I don’t want to do.”

Fazio has been at the vanguard of modern course design for 40 years. He began at age 19 with his uncle, former PGA Tour pro George Fazio, and went solo in 1983 with his own company based in Hendersonville, N.C. Today, with a staff of 29, including 10 senior associates, Fazio continues to create courses nationwide that are noted for a synthesis of terrain with challenge and playability, yet each with its distinct personality. He likens design to the various styles of residential and commercial architecture. “Golf courses are one-of-a-kind products, rather than just 18 holes of golf that look alike,” Fazio says.

Though Fazio has designed more courses than he likes to calculate — “I try not to count them; it makes me feel old.” — and five (so far) in Coachella Valley, he considers his involvement with The Vintage Club courses as a “major milestone” for his business, design philosophy, and for golf in the valley and the West.

“When this was done — 25 years ago — no one had done anything of this caliber and quality, with its uniqueness and special features,” he says. “The Vintage Club was one of the first golf courses where it was a core golf course with no interference from residual real estate uses in the interior of the course.”

When planning and implementing a course layout, Fazio credits visionary clients with whom he collaborates — including Vintage developer Mick Humphreys — for their knowledge and insight. “For me, it matters who you work for,” he says, “Working for someone who understands the game and has a real passion for it makes a big difference.”

Fazio also spearheads philanthropic endeavors: Fazio has donated millions of dollars to children’s causes throughout the nation through his Tom Fazio Children’s Charity Fund (which involves 51 country clubs) and sales of his book, Golf Course Designs. Fazio and wife Sue founded two Boys and Girls Clubs in the Hendersonville area, and he serves on the national Boy and Girls Club of America board.

Up next for the architect: more leisure time to perfect his own game and “more money in a pile to give away to charity.” He is also designing two courses for Humphreys in Cabo’s Chileno Bay in Baja, Mexico. And he would like to design a course in an unlikely setting: “I’d like to go to the Mall of America parking lot [in Minnesota] and build a golf course. Now, that would be a fun and challenging thing to do.”