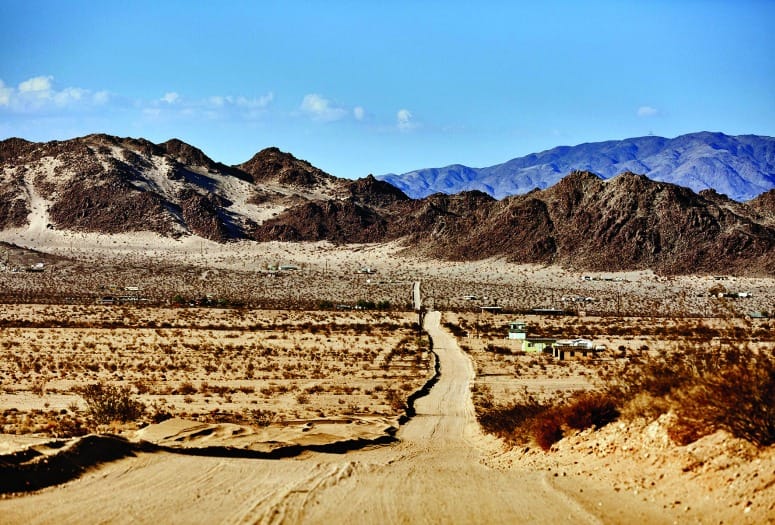 Cool and curious, Neville Wakefield steps onto the ledge of the lap pool at a Little Tuscany house overlooking acres of raw desert in the upper foothills of Mount San Jacinto. The sun aligns with the mountains’ peaks, casting the day’s last glow on its eastern face, as he stands pensively. Slowly he rolls up the sleeves of his untucked dress shirt; the sun disappears behind the mountain; and the lights of Palm Springs at dusk begin to flicker in the distance.

Every nuance of the desert captivates Wakefield, the New York–based curator and artistic director of Desert X, an exhibition of site-specific artworks sprawling from Palm Springs to the Salton Sea Feb. 22 to April 30. Through about 20 installations by artists he selected from near and far, he hopes to give residents and visitors a fresh perspective on the complexities that make up the Coachella Valley. 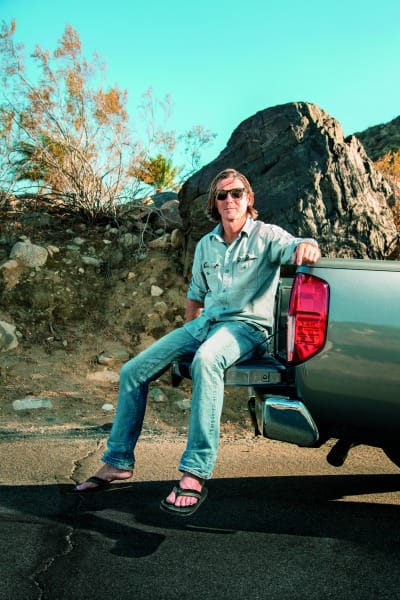 The California desert seems a logical destination for Wakefield, who mounted an exhibition called Elevation 1049: Between Heaven and Hell, in the mountains of Gstaad, a luxurious vacation village in the Swiss Alps. “In many ways Elevation was a precursor to [Desert X],” he says.

Amid the snowy white landscape and mountains popular with skiers, “there was a certain kind of blankness that became the backdrop. That’s also true of the desert. It has been referred to as a blank canvas. How blank it is, is another question.”

Like Elevation, Desert X offers a different kind of encounter, free and accessible, both geographically and intellectually.

“The art will speak to [people] because they’re in an environment they already know,” Wakefield says. “I hope it will refract things that are very familiar through the lens of the unfamiliar. You’re not actually looking for art but happen to come across it and relate to it at some level that isn’t primarily aesthetic, but draws you to this other narrative and experience. That’s what art can do. It can make you see something that may be very common to you in a way that shines a different kind of light on it. It’s about not presupposing an interest in art. That’s the benefit of a project like this — and the challenge for artists.”

Wakefield’s unorthodox approach to art and life traces to his childhood. He and his three older sisters were raised in a large 18th-century granite storehouse on the Isles of Scilly, an isolated archipelago of about 800 people off the southwest coast of England. His grandmother had purchased and renovated the property in the 1930s and his “proto-hippie” parents moved there in the 1950s. His mother was a painter, his father a potter. They had no car; his mom took the kids to school in the family’s donkey cart, which Wakefield says instilled “strength through humiliation.” When he wasn’t sailing, he was often building models of boats. Wakefield’s world began to open when he was about 14 years old and sent to boarding school.

Ugo Rondinone installed The Morning of the Poem in Neville Wakefield’s 2014 exhibition Elevation 1049.

Wakefield moved to London to attend university, studying philosophy as an undergrad and earning a master’s degree in post-structuralism at the Royal College of Art in 1991. While pursuing his doctorate in philosophy, he met his future (now former) wife Camilla Nickerson and moved to New York. Nickerson, a fashion stylist working for Vogue, actually facilitated Wakefield’s entry into the art world.

Her editor, Anna Wintour, assigned him to write about artists and the intersection of art, music, and fashion. He has also been a guest editor and contributing writer for W, Tar, Artforum, and Art in America, as well as creative director for Playboy and Nike. His nonchalance belies the celebrity he gained organizing exhibitions for the prestigious Mary Boone Gallery; as curator of Frieze Projects, artworks commissioned in conjunction with London’s Frieze Art Fair; and as senior curatorial adviser for P.S. 1 Contemporary Art Center, an affiliate of the Museum of Modern Art in New York. At P.S. 1 he mounted his exhibition 1969, a survey of sex, drugs, and rock ’n’ roll that followed his series of short erotic films fetishizing contemporary art. “I spent a bit of time working institutionally, but they have this specific kind of context, one in being bounded by a white cube and also having a guide for the way you experience the art,” he says. “The staging is already there. My interest is in how art behaves outside of the white box.”

The desert provides the perfect setting. “The parallels between the ocean and the desert are oft cited,” he says. “I grew up as far away from the desert as you can possibly imagine. I think the European imagination is particularly drawn to the desert because we don’t have that experience.” For Desert X, he selected artists with an interest in the desert. “I was looking for [artists] who have a curiosity as to how their art can exist in this sort of expanded field, away from a controlled environment,” he says.

“I hope it will refract things that are very familiar
through the lens of the unfamiliar.” 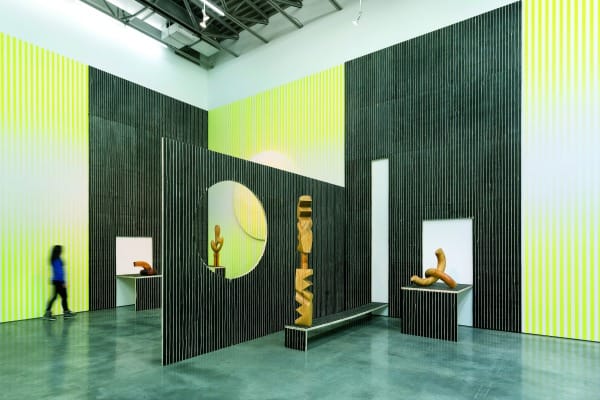 Claudia Conte’s No Melon No Lemon exhibition at Gladstone Gallery in New York. 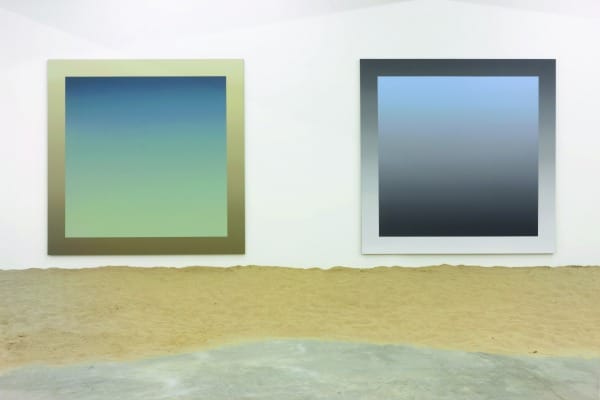 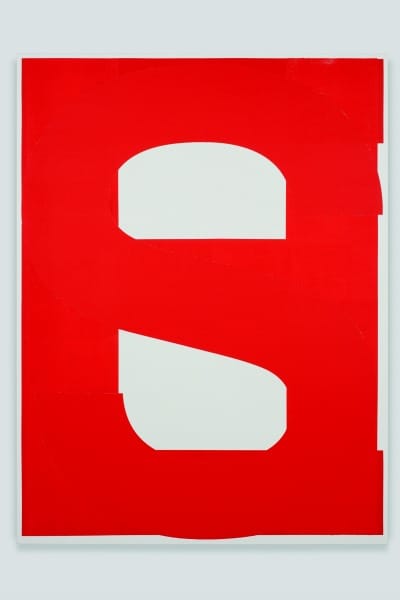 Will Boone’s DIAD painting at Karma in New York.

Although Desert X was not established with a concrete thesis, some of the mission stems from Wakefield’s background in philosophy.

“All art is inquiry,” Wakefield says. “Philosophy is a little bit like art. Art can be the outcome of philosophy. All art is manifest thought, and in that sense it is a version of philosophy, visual rather than literal.”

Ultimately, each artist’s work will become a piece of the whole, offering individual and collective meaning and new ways of seeing the desert.