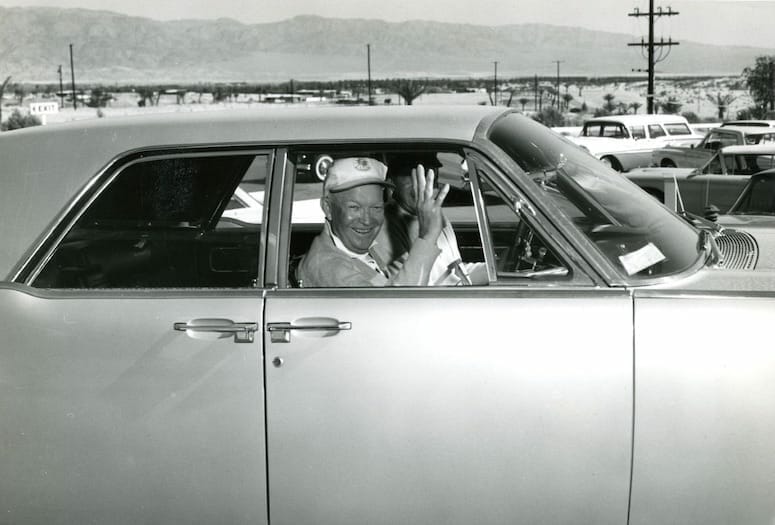 In a way it was business as usual when President Dwight D. Eisenhower and the First Lady arrived in the desert 50 years ago this month. “We were used to celebrities in town, and we’ve had several presidents here,” says Frank Bogert, former Palm Springs mayor and author of Palm Springs: The First 100 Years. In addition to the hordes of stars and tycoons who made the area their playground, Herbert Hoover had visited the Desert Inn in 1936 and Franklin Roosevelt had stayed at La Quinta before the war. Neither, however, caused the stir that Ike and Mamie did when they arrived for a seven-day vacation.

“The crowds were the biggest ever,” Bogert says, estimating more than 2,000 people turned out to greet the presidential couple. Then mayor of Palm Springs Florian Boyd joined Gov. Goodwin Knight in welcoming the pair, and a crowd of onlookers lined the street to watch the procession to Smoke Tree Ranch, where the Eisenhowers would stay at the home of businessman Paul Helms.

The presidential visit brought the area unprecedented attention. Thanks to the new medium of television, millions of envious viewers around the world caught their first glimpses of a Palm Springs winter.

Of course, this wasn’t any old president coming to town. Ike, as he was affectionately known, had played a key role in one of the most significant battles in modern history.

Eisenhower graduated from West Point in 1915. When the United States joined the Allied effort in 1917, he looked forward to directing troops on Europe’s Western Front. His superiors hesitated to send him overseas, however, preferring to employ his expertise in training infantry troops and coaching football stateside. He pushed for an overseas assignment until finally the Army gave him orders to lead an armored unit in France. A sudden outbreak of peace intervened, however, as the armistice ending the Great War took effect one week before he was to have taken command.

The isolationist phase that followed would see the U.S. army reduced to the world’s 16th largest. Promotions became harder to come by, and Eisenhower remained a major for 16 years. But he didn’t give up his attempts to advance his career and improve his skills by aligning himself with influential mentors. These included stints as an infantry tank school instructor under Col. George S. Patton, and helping Gen. Fox Conner to protect the Panama Canal. Conner encouraged Eisenhower to expand his understanding of warfare by reading ancient classics and important contemporary works. In the 1930s, Eisenhower became Gen. Douglas MacArthur’s chief of staff in the Philippines.

Five days after the Japanese attack on Pearl Harbor, Gen. George Marshall called Eisenhower to Washington to craft a plan to defend the Philippines. Eisenhower predicted that the Japanese would quickly overrun the islands and recommended that MacArthur hold out long enough for the United States to establish an Australian base of operations in Australia. His decisive planning and accurate forecast impressed Marshall, and Eisenhower became a brigadier general in charge of domestic planning for the war effort in the Far East. He continued to push for an assignment in the combat arena, however, until Marshall named him commander of the European theater of operations.

By the time Franklin Roosevelt met with Winston Churchill and Josef Stalin to discuss an invasion of Nazi-occupied Europe, only one man seemed capable of directing the incredibly complex logistics and diverse international forces required. As Supreme Commander of the Allied Expeditionary Force, Eisenhower orchestrated the June 6, 1944, assault on Normandy, beginning the liberation of France and turning the tide of World War II.

After the war, Eisenhower served as president of Columbia University before taking command of new NATO forces being assembled in 1951. Republican leaders visited him in Paris and persuaded him to run for the White House. “I Like Ike” proved more than a campaign slogan, as he won a sweeping victory.

When Ike arrived in the desert on Feb. 17, 1954, residents greeted him not only as president of the United States during economic boom times, but also as a hero in the world’s greatest conflict.

At least one peculiar theory has arisen to explain why Eisenhower chose the desert as a vacation destination. On the evening of Feb. 20, the press learned that the president had not shown up where he was scheduled to be, and rumors spread that he had died or become seriously ill. Press Secretary James Haggerty announced that Eisenhower had chipped his tooth while enjoying a fried-chicken dinner and staff had rushed him to a local dentist. The next morning, Eisenhower appeared at a church service. That evening, the dentist and his wife attended a steak dinner at the president’s invitation.

Some have speculated, however, that the president had secretly traveled to nearby Edwards Air Force Base to meet with a group of extraterrestrials and see a display of alien technology. The whole “vacation” was, according to this theory, an elaborate ruse to cover up this clandestine meeting. A search on Google for “Eisenhower Palm Springs aliens” will turn up hundreds of hits.

It seems unlikely, however, that the government would go to all that trouble to cover up the incident and then attract attention to the president’s absence by scheduling him to be somewhere else. Eisenhower probably came to the desert for the same reasons as so many others: the climate and the golf.

At 8 a.m. on the first morning of the president’s stay, he and Paul Helms joined Studebaker chairman Paul Hoffman and Tamarisk Country Club pro and all-time great Ben Hogan for a foursome. The next day, Eisenhower and Helms golfed at Thunderbird Country Club with founder John Dawson and tire mogul Leonard Firestone.

Thanks for the Memoirs

After returning to Washington, Eisenhower signed the Equalization Act, finalizing the Agua Caliente’s land allotments. He would return to the desert several times, and worked on his memoirs at Indian Palms Country Club in Indio. The welcome center proudly displays a desk used in the writing of those memoirs, although opinions differ on whether Eisenhower or his secretary actually sat in front of it.

“He was a very quiet man,” recalls Aldine Tarter of Indio, former general manager of the club. “He was not a jokester.” He tended to leave the humor to others, such as frequent companion Freeman Godsen, who created the character Amos of Amos ’n’ Andy.

When Tarter was in the hospital recovering from surgery, she received a flowers from the retired president.

“They had my favorite, bird of paradise, in them, which Freeman Godsen had fished around enough to find out,” Tarter says. “He asked the girls in my office what was my favorite flower. You would have thought Jesus himself was in my room, because all the nurses came down to look at the flowers that General Eisenhower sent. He was referred to as General Eisenhower, not President, by his request. When he came, that created quite a lot of stir in the hospital and created lots of nice attention for me thereafter. He just was a nice person and a thoughtful kind of person. Even if it was Freeman Godsen’s idea to come see me, he could have said, ‘Aw, the hell with it.’”

Eisenhower prided himself on his quail hash, which he prepared during the holiday season. “He had all his friends in and they all dutifully said ‘it’s the best quail hash I ever ate,’” Tarter says.

Tarter recently returned to Indian Palms Country Club to speak at a luncheon.

“They wanted to know all about that house over there called the Eisenhower Quarters, and I said to the general manager, ‘I’m not going to stand here and lie and say that was his office. You tore down his office.’”

The winter residence real estate magnate Robert McCulloch custom-built for him on an oversized lot on the golf course at Eldorado Country Club in Indian Wells has fared better. Dan Finnane, former owner of the Golden State Warriors, moved into it in 1999.

“I have his bust in my garage,” Finnane says. The bronze sculpture was removed from its place on the golf course during a recent renovation. Years of exposure have taken a toll on the bust’s appearance. Finnane says he is working with a restorer at College of the Desert to restore the bust’s former luster before installing it in front of the historical residence.

Although Eisenhower made Eldorado his home course, he scored his only hole-in-one at Seven Lakes Country Club in Palm Springs, on the par-three 13th hole.

The general’s influence extends far beyond country clubs, however. The Palm Desert Community Presbyterian Church, which the president and his wife used to attend, has an Eisenhower Room and paintings by him. The Eisenhower Walk of Honor abuts City Hall in Indian Wells, and Eisenhower Mountain offers a hiking trail with spectacular views of the valley. The Eisenhower Medical Center towers over Rancho Mirage. And at Eisenhower Elementary School in Indio, children studying American history can read about the nation’s distinguished leaders, including one whose arrival 50 years ago created a whirlwind of excitement and left an indelible impression on the desert.