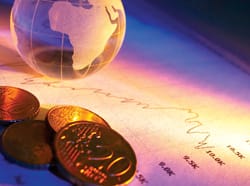 Chris Barnett, a business travel journalist, took advantage of Continental Airlines’ inaugural nonstop flight from Newark to Mumbai. While there, he met with business and government leaders and chatted up the hotel staff at the five-star Taj Mahal Palace & Towers Hotel. “What an eye-opener,” he says. “India’s economy is booming. The [GDP] is at 9 percent, the real estate market is strong, and the stock market is hot. There’s optimism everywhere.”

Two years ago, Goldman Sachs set up a one-man “investment office” in a Hilton hotel room in Mumbai. Today the investment firm occupies three floors of an office building in Mumbai’s Prabhadevi neighborhood.

The most efficient way to invest internationally is with exchange-traded funds, or ETFs. These open-ended investment funds trade continuously. In early 2006, there were about 100 ETFs. By year-end, there were about 400. ETFs have minimal fees and are tied to a specific index; think of an ETF as a basket of stocks. Country-specific indexes are broadly diversified and trade on the major U.S. exchanges.

Estes and other longtime investment professionals favor ETFs because “there are no ongoing fees and it’s a play on the region or country which allows you to get in and out in a heartbeat since ETFs trade continuously,” he explains. “I personally like India and South Korea.”

Rick Munarriz, a senior analyst who has followed international investing for Motley Fool since 1995, says, “You don’t need to get your passport stamped to make intelligent, well-informed international investment decisions.” Munarriz avoids individual funds and advises investors to look at no-load, good-performing international funds. “There are different ways to skin the proverbial international cat,” he says.

Munarriz keeps his options open to both closed and open-ended international mutual funds as long as the fundamentals are in place: growing economies with consumers who embrace capitalism even if living under communist rule, such as Vietnam or China. “In today’s economy, it’s just ignorant to only buy American stocks and mutual funds,” he says. “In reality, U.S. companies are outsourcing more and more to these other countries with growing economies.”

Consider that countries such as China, India, Brazil, and Russia are still depressed compared to Europe. “There is unchecked growth potential as the world becomes flatter, and you’re cheating yourself if you’re not a global investor,” Munarriz says.

While international investing may offer higher returns than domestic opportunities, the risks can be greater, depending on a country’s government and current political climate.

John Schloegel, vice president of investment strategies at Austin-based Capital Cities Asset Management, likes emerging-market ETFs like EEM. “This is one pure play where you instantaneously get the opportunity to capture emerging market returns in one individual security,” he says. Emerging markets range from Southeast Asia to Latin America.

On a trip to Mexico in the 1980s, one investor with foresight spotted an emerging economy and snapped up Telefonas de Mexico at around a dollar a share. A decade later, his $10,000 stake topped $350,000. Now that’s shrewd investing.