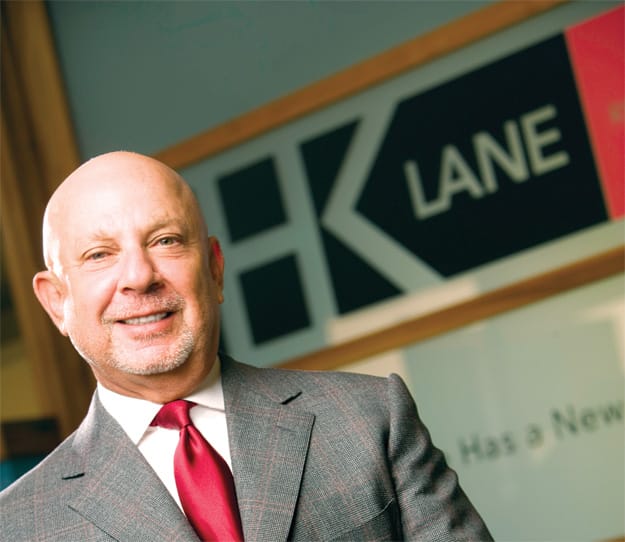 Mercedes, BMW s, Audis, and a black Bentley shimmer in the sun on a hot, late-July afternoon at the new offices of HK Lane Real Estate in Palm Desert. The unabashed luxury says 2003, but it’s not. It’s six years later and CNN has reported the first increase of new-home prices and sales in three years and the possibility that we might have seen the worst of the recession.

Inside the building — the 7,200-square-foot headquarters office of HK Lane — President/CEO Harvey Katofsky appears to have perfectly timed the company’s debut.

This is not the first time he has played this card. “I opened Fred Sands Desert Realty during a similar yet slightly worse market,” Katofsky says. “I’ll go out on a limb and say I think we are pretty close to the bottom right now.”

Katofsky — a pharmacist who moved here from Los Angeles in 1986 and opened a luxurious Italian restaurant — earned his real estate license and began brokering transactions for restaurants throughout the Coachella Valley.

He started Fred Sands Desert Realty in 1994 and grew the company to more than 350 agents and the No. 1 market share position before selling it to Coldwell Banker in 2003. Katofsky stayed on as a regional vice president for several years, counting the days until his five-year noncompete agreement expired. “Retirement wasn’t for me,” he says. “I couldn’t wait until I could come back and build a successful boutique brand from the ground up again.”

Katofsky is known for making swift deals and sealing them with a handshake. That’s what he did with Fred Sands and that’s what he did when he enlisted longtime associate Ron Gerlich as HK Lane’s vice president and chief operating officer.

“The timing is right,” Gerlich says.

“If you wait until the market completely turns around, it’s too late.”

In only five weeks, Katofsky recruited more than 42 of the top and well-seasoned agents. Key administrative and marketing staff includes industry veterans who previously worked with Katofsky.

Katofsky has invested heavily in Internet marketing and technology. He’s counting on his stake in Gibson International, a new luxury-oriented firm on Los Angeles’ west side, to provide referrals for agents. Meanwhile, he’s eyeing La Quinta to open a second office.

Palm Springs Life caught up with HK Lane President/CEO Harvey Katofsky as his firm prepared for its first season.

Now is perfect time to open. Agents need a new start. Our company is something new and exciting. It’s the right time to buy and right time to recruit good agents to build your company.

What has changed the most in the real estate business?

The Internet is the main difference. Today, 86 percent of those looking [for a property] go to the Internet first. Those numbers are huge. All our print advertising is crisp and clean, and its purpose is to drive people to our Web site. [Static] virtual tours are old hat. Video is what you do today to market a property. If someone is touting virtual tours, they’re not utilizing the latest marketing tools. We can even create an individual Web site for a listing with a direct link from our Web site.

How does today’s economy affect buyers and sellers differently from the last down market?

Cash is king. Today you need a significant down payment to get a mortgage. The biggest mistake that buyers make in this market is misjudging the deal they are getting because they think they can always do better. Then they blow a good deal and lose a good house. I see that time and time again. Today’s sellers need to take the offer that is on the table if it’s a decent offer. Take it and run with it.