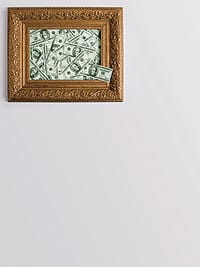 For a reality check into today’s fine art market, listen to collector Faye Sarkowsky, former president of the Seattle Art Museum and board member of the Palm Springs Art Museum. “To get into the market now and buy top-quality art is just incredibly tough,” she says, referring to headline-grabbing prices major auction houses have enjoyed this year. Take the mid-September Damien Hirst sale at Sotheby’s in London. For months, the art world speculated how Hirst, whose work fetches the highest prices of any living artist, was “testing the market,” bypassing his galleries. His strategy paid off with $126 million in sales for 54 of his works.

Newly minted billionaire bidders from Russia, the Middle East, India, and China have catapulted prices to record highs. “We couldn’t reproduce our collection now,” Sarkowsky says. “It’s a totally different ballgame. I’m amazed at the calls we get from dealers asking if we want to sell and the prices being offered.”

Christie’s International announced worldwide sales of $3.5 billion for the first six months of 2008, a 10 percent increase over the same period in 2007. Million-dollar-plus sales also increased for the blue-chip art business, with 457 works of art selling for more than $1 million, compared to 430 sold during the first half of 2007. Sales from Asia and the Middle East rang in at $351 million, an 81 percent increase from last year. It’s no surprise U.S. sales declined a percent as the credit crunch tossed Wall Street hedge fund managers, private equity players, and investment bankers out of the market.

“The number of new collectors continues to increase from emerging markets like Dubai, China, India, and Russia. We’re also seeing increased confidence from Hong Kong,” observes Rik Pike of Christie’s. It’s not uncommon for a Russian buyer building a mega mansion to plunk down $50 million in cash for a trophy piece. “Russians are building private museums where money is no object, and they simply don’t mind making up for lost time by overpaying,” observes Steven Nash, Palm Springs Art Museum executive director.

Though artists such as Mark Rothko, Francis Bacon, and Lucien Freud fetched upwards of $50 million at last spring’s sales, predictions of an inevitable “correction” abound. “Everyone is waiting for the other shoe to drop,” says Tom Danziger, Art & Auction columnist and senior partner in Danziger, Danziger & Muro, a New York law firm specializing in the fine-art market. Meanwhile, his clients are buying Chinese contemporary and Indian art whose prices have escalated over the last five years. “They still see room for appreciation in those markets,” Danziger confides.

“There is loads of speculation in the contemporary market from other countries,” says former New York gallery owner and Palm Springs Art Museum board member Marilyn Loesberg. “These people have vast amounts of money and pay $35 million for a token piece to make a statement about their collection. I’m buying photography myself.”

The U.S. market still depends on disposable cash. “In 1989, the market went straight up and then just died,” Loesberg says. “I had friends who bought Warhols and Rauschenbergs at the top of the market then and couldn’t sell them for $400,000. Of course, today they would be $6 million to $7 million.”

No matter the market climate, Nick Korniloff, director of Art Miami, the largest satellite art fair held this month during Art Basel Miami Beach, cautions to buy from those who stand behind their artists and their prices and who will buy the piece back from you for what you paid for it. “This is a market that thrives on confidence,” explains Korniloff, who saw Art Miami’s gallery participation increase 10 percent this year.

When considering donating your works to museums or gifting it to family, consult recognized experts, such as those from the American Society of Appraisers. “The tax code is in disarray on fractional giving and remains problematic for collectors,” Danziger cautions.

“Despite our wobbly economy, the very global nature of the art market makes it an attractive investment with long-term appeal and liquidity,” observes Dr. Philip Eliasoph, a professor of art history and fine-art consultant in Connecticut. “I’m always asked at dinner parties by the Wall Street equity folks about the long-term viability of the market. It’s one sector of the economy where money is still flowing in.”

In his book The $12 Million Stuffed Shark, Don Thompson asserts that most art bought today won’t appreciate enough to eclipse high transaction costs, including buyer/seller premiums, commissions, dealer markups, insurance, and capital gains tax when selling. His advice for investment-minded collectors is to seek works priced in the $50,000 to $100,000 range.