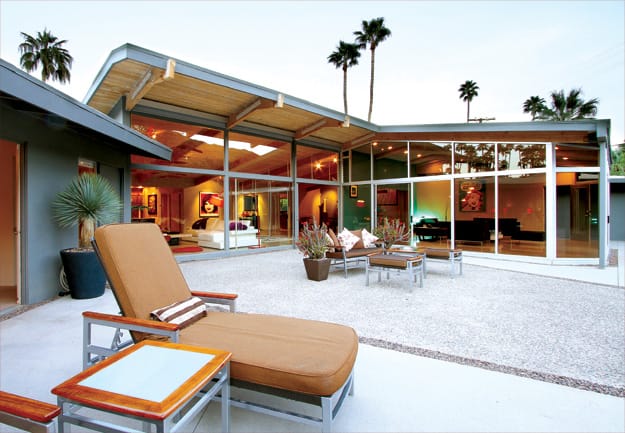 Bill Scheffler and Ann Sheffer of Westport, Conn., bought three luxury properties in Palm Springs over the last 18 months. “We first had the opportunity to buy an Alexander in Vista Las Palmas,” Scheffler says. “Then a bank-owned property in Old Las Palmas — the former Jeanette Rockefeller estate — came up at a tremendously reasonable price and we bought that.”

The desert offers desirable inventory priced as much as 40 percent below 2005 prices. Los Angeles Times reported that sales of homes $1 million and above in California rose 21 percent in 2010 — the first increase in the luxury segment in five years. And sellers in the Coachella Valley appear to be pricing properties closer to the market than their personal expectations. California Desert Association of Realtors statistics prove the point. From Jan. 1 to March 13, 27 homes that were on the market for more than 120 days sold in the $1 million-plus range, yielding an average of about 83 percent of the listing price.

“People who have money are starting to buy as they see the deals that won’t last,” says Andy Linsky of Windemere Real Estate in Palm Springs. He notes that Palm Springs has a 15-month inventory in the $1 million to $2 million range and that buyers can also find good deals in the $2 million to $5 million range. “A home closed in December at $2.1 million that would have been at least $3.5 million in 2005,” he says.

Rancho Mirage has bargains due to two-and-a-half years of inventory. There, Linsky, who has been selling in this market for 14 years, sees prices off 40 percent. “With this kind of inventory, if you can afford to buy now, why wait?”

Valery Neuman, a top Windemere producer, has seen an increase in showings on her $4 million listing in Rancho Mirage’s prestigious Clancy Lane area and at her $4.5 million listing at Mirada, up the hill from Highway 111. “All of a sudden, all these CEOs with cash are here looking,” says Neuman, who recently closed escrow on a home at Bighorn Golf Club for $4.8 million that in 2005, she says, would have sold for at least $1 million more.

Properties with a celebrity cachet in the $2 million to $5 million range, though pricey, still offer value, especially in Palm Springs’ Old Las Palmas neighborhood. Keith Markovitz and Tyler Morgan of Morgan Monaghan Markovitz sell that area. “We have Dinah Shore’s house, which was on the market for two years in escrow,” says Markovitz, who declined to reveal the selling price (it originally listed for $5.4 million). “I have knowledgeable clients from out of the area who are stunned to see how affordable luxury properties are here compared to other places,” Markovitz says.

Distressed bank-owned properties remain deals for those with cash and the know-how to renovate. “The luxury market has properties in bad shape without appliances or landscaping,” says luxury-oriented broker associate Louise Hampton of Prudential California in Palm Springs. Investors buying them need the expertise to know how to fix them up and then, when they sell, should be content with a small profit.

Cash remains king when negotiating. “There are lots of Canadians buying here with cash, and they are the ones who can buy these opportunities,” Neuman says.

Harvey Katofsky, founder and CEO of HK Lane Real Estate, says, “There are really good buys out there, especially for people who can buy without having to sell. If you do have to sell at a lower price, then you will make up the difference on the home you’re buying.”

If not paying cash, plan on putting 50 percent down. But lending on jumbo mortgages is loosening. “We are seeing lenders more anxious to make loans,” Katofsky says.

The ultimate bargain was had by billionaire Larry Ellison, who plunked down a reported $42.9 million for the 249-acre Porcupine Creek estate formerly owned by now-divorced Edra and Tim Blixeth. The listing price was as high as $75 million.

With luxury properties still at distressed prices, buyers who are in the million-plus price range can count on finding good deals from Palm Springs to La Quinta — for now.