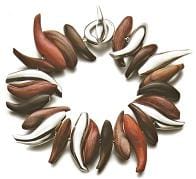 Inspired by the design of his buildings, Frank Gehry teams with Tiffany & Co. to create a signature jewelry collection.

If you admire Frank Gehry’s dreamy Bilbao museum, perhaps you’d like a diamond-encrusted platinum brooch of its floor plan. It will cost you a cool million, but perhaps then you, too, can grace the cover of magazines worldwide.

The brooch — at Tiffany & Co. in Beverly Hills — may be a shining star, but it is far from representative of The Gehry Collection, about 150 pieces of more austere jewelry the famed architect has designed for Tiffany. Should a million dollars for lapel ornamentation stretch your budget, the collection starts at $125 for a sterling silver ring. Gehry has also designed 65 pieces of tableware — vases, candleholders, and tabletop sculptures — for Tiffany.

Rings, bracelets, earrings, and necklaces with Gehry’s magic touch debuted at Tiffany & Co. in Palm Desert in March — before debuting in New York (Tiffany’s flagship store) and Tokyo in April, London in May, and the remaining Tiffany stores this summer and early fall.

The Gehry Collection premiered at Tiffany in Beverly Hills in March with all the fanfare one would expect from the pairing of two names with such sterling reputations. A portion of Rodeo Drive was closed and curtained off for an evening celebration marked by celebrity attendees (including Anjelica Huston, Owen Wilson, Quincy Jones, and Lawrence Fishburne), a concert by 2006 three-Grammy winner John Legend with guest Patti LaBelle, and food personally catered by Wolfgang Puck. The Bulgari, Gucci, Lalique, Louis Vuitton, and Cole Haan storefronts were partially obscured by the street scene.

Gehry himself, as well as James Quinn, president of Tiffany, were present and available earlier in the day to talk about the collaboration at the Regent Beverly Wilshire in a room previously frequented by Warren Beatty.

“It used to be [his] apartment,” Gehry said. “I lived here six months on the second floor. We used to pass in the elevator a lot.”

For a man who has earned international acclaim as a pioneer in architecture and won the field’s highest honors, including the Pritzker Architecture Prize, Gehry is astonishingly humble. “I think of myself as an architect,” he said. “[Tiffany] took a chance.”

[…] This article continues in the June 2006 issue, or subscribe to avoid missing future issues!