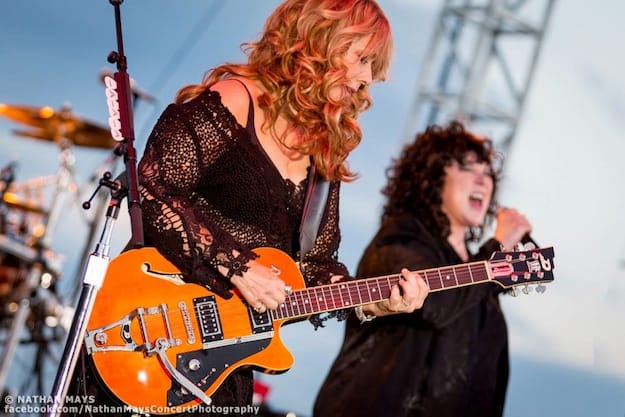 Thursday, Aug. 22
6 p.m.: The free film screenings continue at the Palm Springs Art Museum with "Sullivan's Travels" from the United States. Director John L. Sullivan disguises himself as a tramp and goes on the road to connect with the common people.

7 p.m.: The Riviera Palm Springs serves up specialty drinks and food for its "Hot as Hell" Pool Parties from 7-10 p.m. every Thursday through Oct. 31. Read our preview.

8 p.m.: (((Folk Yeah))) and Club Mercy present The Black Angels, who will play from their "Indigo Meadow" album at Pappy & Harriet's in Pioneertown.

Dinner suggestion: Blame In On Midnight in Palm Springs has reopened under new management and a revamped menu. Read our story and its 89-year-old owner. 7 p.m.: Knott's Soak City will stay open a few hours after its normal 6 p.m. closing time to bring kids and families its third annual "Dive-In Movie". Tonight is the final night and features "Bridge to Terbithia".

7 p.m.: Think beaches, boats, bars and tropical drinks with little umbrellas when you listen to Garratt Wilkin & the Parrotheads at the Wilson Creek Winery in Temecula.

9 p.m.: Dancing, cool pool, eats and drinks sounds like a good recipe for your Friday nights at the "Caliente Pool Party" through Aug. 30. The Agua Caliente Casino Resort & Spa partners with FM radio station KKUU (92.7) to turn the pool into an oasis nightclub. Read our preview.

9 p.m.: Jeffrey Osborne, whose voice lifts you up with "On the Wings of Love", appears at the Morongo Casino Resort and Spa.

10 p.m.: DJ Smoke Signals and Spindrift are part of a four-hour musical set in the Ace Hotel & Swim Club's Amigo Room where the music goes until 2 a.m. And its free. Saturday, Aug. 24
7 a.m. – Noon: College of the Desert Street Fair is located near the main entrance to the college off Monterey Avenue.

8:30 a.m.: As a tribute to Elvis Presley, whose passing was just honored 36 years after the fact, fans can tour his Honeymoon Hideaway in Palm Springs and listen to impersonator Travis Powell perform from 4-6 p.m. at the house. Read what to look for on the house tour.

1-3 p.m.: Take a seat inside a F4 Phamtom II fighter airplane that ruled the skies during the Vietnam War at the Palm Springs Air Museum's final "Open Cockpit" event of the summer. Read the personal touch done to this airplane.

7 p.m.: "The Wild Bunch", a controversial film for its time in the late 1960s for its graphic violence, will be shown at The Indio Performing Arts Center as part of its string of Saturday night flicks. Read our story about this weekly event.

7 p.m.: Ask questions of director Dan Mirvish after a screening of his film, "Between Us" at Cinemas Palme d'Or in Palm Desert. The movie focuses on two couples and how their relationship deteriorates over conversations about money, sex and religion.

8 p.m.: Mike Stinson and Funky Jenn provide a free show at Pappy & Harriet's in Pioneertown. Funky Jenn & The Bad rip a rocking' soul sound with blues-based classic rock of the 1970s, while Stinson cuts the air with a solid, honky-tonk country sound.

8 p.m.: Heart's Ann and Nancy Wilson hook up with Jason Bonham, son of the late Led Zepplin drummer John Bonham, for a guitar-burning rock concert at Fantasy Springs Resort Casino in Indio. Check out the Youtube video of Heart with Jason doing "Stairway to Heaven" as a way to get ready for this concert.

Dinner suggestion: Alberto's Ristorante in Rancho Mirage has plenty of heritage form Alberto Pagliari's roots on Melrose Avenue in Los Angeles. His Rancho Mirage location has been open since 1980. Brent Amaker and The Rodeo

Sunday, Aug. 25
7 a.m. – Noon: College of the Desert Street Fair is located near the main entrance to the college off Monterey Avenue.

2 p.m.: Norman Lasiter will incorporate songs from his two CDs, Trust The Wind and The Gift of Love with accompaniment by Christopher Marlowe at the Arthur Newman Theater inside The Joslyn Center in Palm Desert.

8 p.m.: Brent Amaker and The Rodeo has had its music played on episodes of "Californification" and "Weeds". They are set to release their new album, Year of the Dragon. Hear them at Pappy & Harriet's in Pioneertown.

Brunch suggestion: Bring your dog to Oscar's Cafe & Bar in Palm Springs from 7:30 a.m. to 2 p.m. Dogs can feast on a meal from MyPerfectPet.com, while you can enjoy $2 Mimosas and '80s music. Make your reservation. The 16th annual Stages New Musical Theatre Festival will be held in California for the first time after spending 15 years in Chicago. Performances run Aug. 23-25 split between the Lony Chapman Theatre and the ANMT – both in North Hollywood. See eight new shows in various stages of development in one weekend.