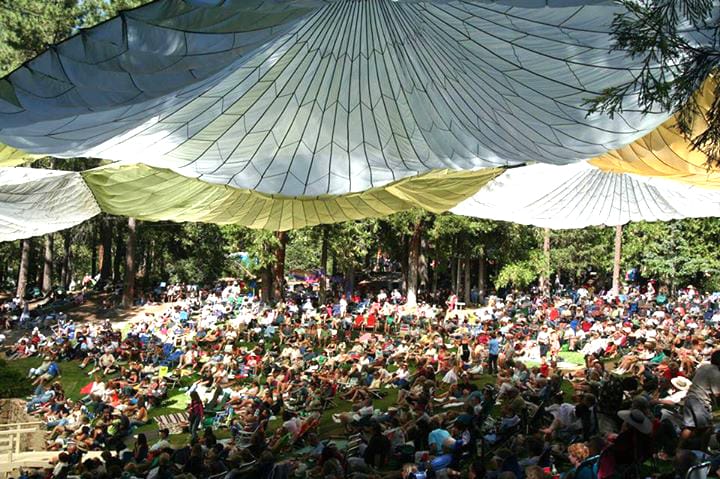 Thursday, Aug. 15
10 a.m.:  Bring in a pair of gently worn jeans into Chico's Boutique on El Paseo in Palm Desert and receive $20 off any full-priced denim purchase. The donated jeans will be given to the National Network to Ed Domestic Violence. Runs through Aug. 18.

6 p.m.: The free film screenings continue at the Palm Springs Art Museum with "Student" from Kazakhstan. A solitary philosophy student steers his directionless life toward the commission of a violent crime.

7 p.m.: The Riviera Palm Springs serves up specialty drinks and food for its "Hot as Hell" Pool Parties from 7-10 p.m. every Thursday through Oct. 31. Read our preview.

Dinner suggestion: Hawaiian fusion gives the food at Roy's a distinct taste to match a welcoming style of service in Rancho Mirage. Read our story.

9 p.m.: Dancing, cool pool, eats and drinks sounds like a good recipe for your Friday nights at the "Caliente Pool Party" through Aug. 30. The Agua Caliente Casino Resort & Spa partners with FM radio station KKUU (92.7) to turn the pool into an oasis nightclub. Read our preview.

Dinner suggestion: Blame It On Midnight is back open in Palm Springs at the Regal Cinemas complex on Tahquitz Canyon Way. Check out the revival of this once popular eating establishment. Saturday, Aug. 17
7 a.m. – Noon: College of the Desert Street Fair is located near the main entrance to the college off Monterey Avenue.

9 a.m.: Watch a screening of the documentary, "Chasing Beauty" and then participate in a Q&A with the director/writer Brent Huff courtesy of the Desert Film Society at Camelot Theatres in Palm Springs. Read our interview with Huff.

9:30 a.m.: The "Hot as Hell" Web TV Series Fan Festival continues with breakfast and a panel discussion wit the creators of four Web-TV series: "Fumbling", "The Inn", "Pretty" and "Venice" at the Palm Springs Riviera. Read our interview with the event's and series creator – Palm Springs' Steve Silverman.

10:30 a.m. to 6 p.m.: Idyllwild Jazz in the Pines celebrates its 20th anniversary utilizing the same pool of talent it did in the 1990s – namely the students who graduate from the Idyllwild Arts Academy. Read the background on the event, and view our VIDEO of its latest well known student, Casey Abrams.

5 p.m.: Hear selections from The Lonely Wild's "The Sun As It Comes" (pictured right) plus Kris Orlowski at Pappy & Harriet's in Pioneertown.

5:30 p.m.: Guide Dogs of the Desert Founders Club slate their 19th annual Summer Fling with proceeds going to the non-profit organization. The Hawaiian Luau theme will play out in Whitewater, Calif., and includes dinner and a silent auction.

7 p.m.: One of the more shocking films of its time, "A Clockwork Orange" graces the screen at The Indio Performing Arts Center as part of its string of Saturday night flicks. Read our story about this weekly event.

8 p.m.: The world of magic opens up the imagination to believe in the impossible again. Catch the Carnival of Wonders with magicians and illusionists Mark Kalin and Jinger Leigh with comedic magician Jeff Hobson at Agua Caliente Casino Resort Spa in Rancho Mirage. Hear from magician Mark Kalin in our preview.

8 p.m.: It's all about the ladies at Ladies Night Out at Spotlight 29 Casino in Coachella. An amazing gathering of musical talent with Bell Biv DeVoe, KC & JoJo, Brenton Wood, Timmy T and the Candyman.

8:30 p.m.: See the Web TV series that "Hot as Hell" is all about, but do it with cast members and crew from each of the shows at the Web TV Series Fan Festival at the Palm Springs Riviera.

Sunday, Aug. 18
7 a.m. – Noon: College of the Desert Street Fair is located near the main entrance to the college off Monterey Avenue.

9:30 a.m.: Cast members from the four Web TV series part of "Hot as Hell" will share breakfast and conduct a panel discussion at the Palm Springs Riviera. Read our interview with the event's and series creator – Palm Springs' Steve Silverman.

10:30 a.m. to 6 p.m.: Idyllwild Jazz in the Pines celebrates its 20th anniversary utilizing the same pool of talent it did in the 1990s – namely the students who graduate from the Idyllwild Arts Academy. Read the background on the event, and view our VIDEO of its latest well known student, Casey Abrams.

11 a.m.: Climb aboard a bus from Palm Desert to the Highland Springs Resort in Cherry Valley for the Sausage & Beer Festival, which features food, craft beers and family events. Advance reservations required. Call (760) 219-3000 and ask for Nancy Cohee.

2 p.m.: Singers Angelo Divine and Arienne Battiste bring the Los Angeles hit, "Lucky So And So" to the Arthur Newman Theater in The Joslyn Center in Palm Desert. The show is a tribute to the legendary Duke Ellington, chronicling his life to songs you'll immediately recognize.

7 p.m.: Every Sunday is Rock and Roll Service, a free show with the favorite singers and players at Pappy & Harriet's getting together to jam. Take a seat inside a P-51 fighter airplane and then listen to Tuskegee World War II pilot Lt. Col. Bob Friend, who will share his experiences with the "Red Tails" from 1-3 p.m. Aug. 17 at the Palm Springs Air Museum. Included as part of regular admission. Friend is the oldest surviving Tuskegee Airman, the first all-black pilot squadron to serve during World War II. Friend was the Combat Operations Officer for the Tuskegee Airmen's 332nd Fighter Group stationed in Europe.