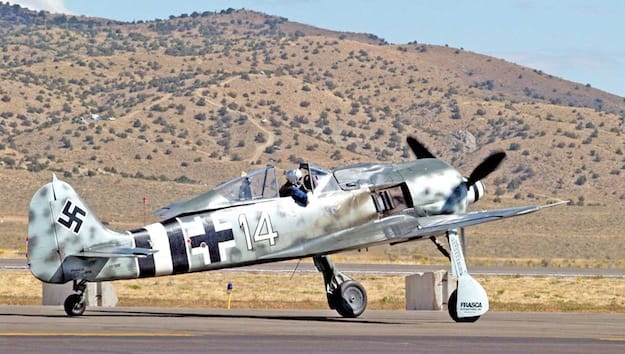 Thursday, June 27
10 a.m. to 5 p.m.: The Focke-Wulf Fw 190 Wurger, a German single seat, single-engine fighter aircraft designed in the 1930s and used during World War II, will be on display at the Palm Springs Air Museum now through Aug. 15. Open daily.

5 p.m.: The first of two Ray Bradbury Theater series segments screen at the Palm Springs Art Museum in Palm Desert. "A Sound of Thunder" begins at 5 p.m. followed by "Touch of Petulance" at 5:30 p.m. In conjunction, the museum is showing two- and three-dimensional artwork. Read our preview.

6 p.m.: The Riviera Palm Springs hopes to make a splash with its "Hot as Hell" pool parties from 6-10 p.m. There will be signature food items and cocktails plus live music.

6 p.m.: The Palm Springs Art Museum is showing a free film every Thursday throughout the summer. This week's offering is "The Fantastic World of Juan Orol" from Mexico. The film pays tribute to Juan Orol, whose career spans nearly 60 films.

7:30 p.m.: Eddie Diamond and his AZ Diamond Band play all of Neil Diamond's songs. Eddie's impersonation will make you think Neil is actually there at The Box Theater, 3635 Market St., in Riverside.

8:30 p.m.: Bring you blankets and chairs and enjoy a summer movie outdoors at Luckie Park in Twentynine Palms every Thursday night through July 25. This week's showing is "Here Comes The Boom" starring Kevin James, Salma Hayek and Henry Winkler.

Dinner suggestion: Ready to tackle a two-pound lobster? You need to RSVP to Morton’s The Steakhouse in Palm Desert by June 28.

7:30 p.m.: The opening session of the Overeaters Anonymous Region 2 Convention welcomes newscomers with entertainment and inspiring speakers, who will share their stories of recovery, including achieving weight loss and maintaining a healthy weight. The convention headquartered at the Palm Springs Hilton runs through the weekend.

8 p.m.: The Police Tribute Band will play such staples as "Roxanne" and "Every Breath You Take" with a free concert at Spotlight 29 Casino in Coachella.

Dinner suggestion: Oscar's Cafe & Bar in downtown Palm Springs has created a California menu with a European flare. See what customers are calling their favorite dishes. Read our story. "Home of the Great Pecan"

Saturday, June 29
1-3 p.m.: The Palm Springs Air Museum will open the cockpit of the Supermarine Spitfire. Museum volunteers are on hand to answer questions and provide the historical backdrop.

4-10 p.m.: The city of Indio continues its Weekly Open Air Market at the Riverside County Fairgrounds in Indio.

7 p.m.: A pair of stage readings bring the Coachella Valley Repertory stage alive with "The Party" by Robert J. Flaherty and "The Sandbox" by Edward Albee. Cost is $10 per person.

7 p.m.: The Hi-Desert Cultural Center in Twentynine Palms will host the premiere of playwright Stephen Bittrich's new theatrical comedy, "Home of the Great Pecan", which will run three consecutive weekends at the center's Blak Box Theater. Bittrich's outlandish tale focuses on UFOs and romance in Seguin, Texas in the mid-1980s.

8 p.m.: Kenny Wizz does more than just look like Michael Jackson. He also sings and dances like the late "King of Pop". See him perform at the Agua Caliente Casino Resort Spa in Rancho Mirage. Read our Q&A with Kenny.

Dinner suggestion: Enjoy a Sunset Dinner at Pacifica Seafood Restaurant on El Paso in Palm Desert served daily from 3-5:30 p.m. for $21.75 per person. Sunday, June 30
2 p.m.: Singer and actress Nicole Dillenberg highlights America's sweetheart and Rancho Mirage resident, Alice Faye, by featuring songs from her many musicals in the 1930s and ‘40s. See Dillenberg at the Arthur Newman Theater at The Joslyn Center in Palm Desert.

5 p.m.: Bill Marx, son of the late Harpo Marx, will bring his all-star band to headline the fifth annual 'Jazz It Up' to benefit ACT for Multiple Sclerosis in Palm Desert. Attend this worthwhile benefit at the Mission Hills Country Club in Rancho Mirage.

Brunch suggestion: The Third Corner Wine Shop and Bistro in Palm Desert offers a brunch from 10 a.m. to 3 p.m. with bottomless Mimosas.

Wanna get away? With temperatures expected to hover above 110 all weekend, perhaps a trip to the coast is not such a bad idea after all. How about San Diego, just two hours away. Start with the Little Italy Mercato in the downtown area featuring 150 booths. In the evening, take in the San Diego Symphony, which is jammin' to the Rolling Stones music at Embarcadero Marina Park South. For more information, visit www.sandiego.org