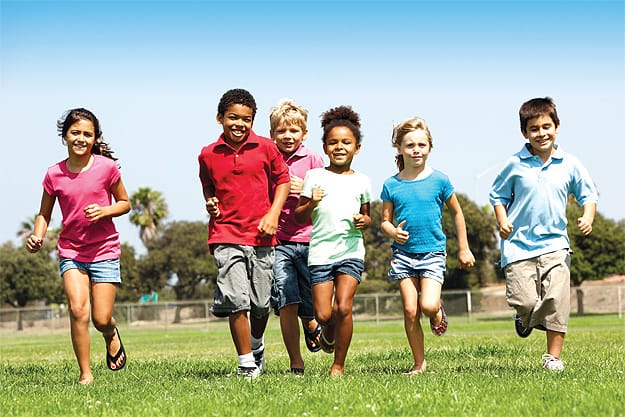 Excited to be back with their friends after summer break, cute little first and second graders line up to go into their classrooms on the first day of school. The line is a little longer now — not by numbers, but by girth, some students weighing in at more than 100 pounds.

It’s a national issue accorded considerable attention from the U.S. Centers for Disease Control and Prevention, which reports that childhood obesity in the United States has more than tripled in the past 30 years. The percentage of obese children ages 6 to 11 increased from 7 percent in 1980 to almost 20 percent in 2008; in adolescents, obesity jumped from 5 percent to 18 percent.

The same report also serves up a sureshot remedy to reverse the trend: schools establishing a safe and supportive environment with policies and practices that support healthy eating and physical activity.

On this point, Wanda Grant is in agreement — and then some.

“School meals are better than they ever have been,” says the director of nutritional services for Palm Springs Unified School District. “This childhood obesity problem is not a simple issue. It’s economic. It’s emotional. It’s probably more a sign of the times than anything. We live in a digital world where most of our students’ primary activity involves a screen, which involves virtually no physical output.

“I can say that California has really moved ahead in its school-meal entitlement programs,” says Grant, a 35-year veteran of school nutrition programs. “Every district has a wellness policy, and restrictions are in place for what can be offered in vending machines: only juice, water, and electrolyte replacements. And there are federal, state, and local laws about what foods can and cannot be brought into the classroom.”

Because more emphasis today is on scholastic achievement (testing) than health and physical education, the departments charged with monitoring the overall well-being of student populations have had to become creative to gain attention, involvement, and funding.

Dr. Lenea Pollett, PSUSD’s nutrition education project coordinator who spearheaded the event, says that parents and the general public are getting desensitized to obesity, accepting it as the norm. “Parents must start realizing that it’s OK to have their kids thin,” she says.

Toward this end, dietetic counseling is provided for students and families at Agua Caliente and Julius Corsini elementary schools, identified in a grant from Desert Healthcare District as needing intervention because of a large percentage of obese students.

Services funded by the grant allow for interventions with students and parents through group or individual meetings or in-home visits, usually at the request of parents.

“Sometimes we’re better able to help when we can see the situation in person,” Grant says.

“[We] went to a home where the only food, if you could call it that, was a 2-liter bottle of Coke, vanilla ice cream, and rice. You think that kid was going to cook up the rice? I would rather have seen a TV dinner in the refrigerator. At least it would have contained a veggie.”

Desert Sands Unified School District has created Harvest of the Month, whereby the district’s nutrition services get a donation from a produce company with information on a fruit or vegetable, which is then introduced to students. A farmers market cart for the kitchen at John F. Kennedy Elementary School is funded by a federal grant from the Magnet Schools Assistance Program.

Desert Ridge Middle School offers an after-school program called Cooking It Up, in which the school kitchen is turned into a cooking lab. Students learn how to read labels and shop for food. They also receive cooking instructions by video from local chefs.

Salad bars abound at Desert Sands schools — all 34 of them, serving more than 29,000 students.

When James Monroe Elementary School Principal Mike Kint dons an apron and fires up the barbecue grill once a month, it means that a few lucky students are having lunch with Kint and physical education teacher Tim Fitzpatrick.

They are there because they got “Caught in the Act.”

“The idea came when staff saw what the kids were bringing in for snacks,” Kint says. “It was always salty and fat or sugary and fat — totally unhealthy.”

Faculty and staff give out “Caught in the Act” slips during recess and lunch when they see a student eating good foods, particularly fruits and vegetables. The tickets get put into a box for a drawing, and the five or six students whose names are drawn get to sit down to lunch with — and prepared by — Kint.

“I usually barbecue chicken and serve it with green salad and rice or pasta with a veggie. Dessert is something like angel food cake with strawberries or yogurt mixed with fruit,” Kint says. “Ironically, they clean their plates and want seconds.”

Cathy Doyle, Desert Sands’ administrator for assessment and accountability, reports that the staff at Monroe also conducts monthly Fitness Fridays, during which the entire student body participates in activities at 20-minute fitness stations.

“I wish there were space to detail all our staff does to encourage healthy eating and fitness habits,” Doyle says. “They know the critical need of all our students to arrive ready to learn.”

“By being one of 53 high schools in 13 states that was selected for the [HealthCorps] pilot program, it was, I think, a recognition that we are paying attention to the physical and mental well-being of our students.

“Our connection with California Endowment and Building Healthy Communities was one factor in the selection,” Adams says. “But our efforts under the [school] district’s Healthy Living and Wellness Program is important to point out as well. We are involving the community more and more to encourage students and parents to talk to us about changing to healthier diets and to put more thought into healthy food choices and to come up with suggestions for alternative lifestyle programs outside the academic curriculum.”

Adults in the district serve as role models by participating in the Biggest Improver Competition, Cinco de Mayo 5K Run/Walk and other activities centered around healthy living and wellness.

Healthcorps Academy coordinators work with teachers and students to connect classroom learning with lifestyle changes. Subjects include The Digestive Highway, Evolution of an Eater, Food Mood Connection, The Critical Consumer, Get Your Zzzs to Get Your Aaas, and Exercise Everywhere.

“It is true that scholastic testing has become the main focus of our system, and academic schedules are crowded so that health and physical education classes, which are now electives, get short shrift,” Adams says. “But we are working hard to provide alternatives and to get students and parents to ask the question, ‘How well are you living your life?’”

The Health Assessment Resource Center, a nonprofit started in 2006 with a grant from the California Wellness Foundation, issues a report every three years that gives baseline data on the health and habits of eastern Riverside County residents.

The most recent report, released in January 2010, is based on telephone surveys to randomly selected households where adults answered questions about themselves or a child in their household.

“Our goal in compiling this report is to be objective and unbiased,” says Chief Executive Officer Eileen Packer, a registered dietician.

“We measure the health status of our residents so that public and private agencies can be proactive in creating programs and services that address the identified unmet needs.”

While the report, called the Community Health Monitor, is exhaustive in its range of topics (including comparison data to other regional and national surveys), of particular interest to local school nutritionists and physical education instructors are results for two demographics: children up to 5 years and ages 6 to 17 years.

HARC recommends www.kids.gov as another resource for educators.

Body Mass Index:
One in three children from 2 to 5 years of age is overweight or obese; just over 3 percent of parents believe that their child is overweight.

Fruits and Vegetables:
Among children ages 2-5, 37 percent met the daily recommended serving of fruits and vegetables; the corresponding number in 6- to 17-year-olds is 20 percent.

Physical Activity:
Slightly over 45 percent of respondents said their child 6 to 17 years old spent most of the previous week in a sedentary activity (including studying, reading, talking to friends, playing video games, and watching television). Source: www.harcdata.org