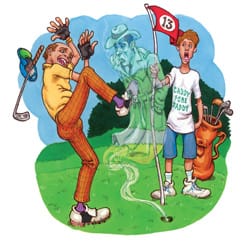 Let’s assume for the moment that you didn’t move to the desert for golf and have no compelling desire to take up the game (allowed, but not something you want to shout out the window — especially if you live on a fairway).

As long as you don’t mind skipping the chance to be in one of the desert’s countless fundraising tournaments, you’ll get along fine if you’re armed with some basic golf-speak. In case you haven’t heard, there are more than 120 golf courses in the Coachella Valley. The only recreational feature more abundant here is the swimming pool, but the only terminology you need to know there is “the pool guy.”

You will want to know golf-speak because you will invariably find yourself surrounded by golfers at a business or social gathering where talk will turn to that four-letter word. Then you will be able to follow the conversation and, with a little practice, even inject an “Oh, my, what terrible luck” here or “Well played!” there.

Because — as teachers will tell you — the best learning experiences come through the ever-popular pop quiz, we present such an opportunity below. Select the correct definition from the choices provided.

ACE
a) When a golfer strikes the ball with such force that the country club will not allow him to return.
b) A hole in one.
c) An affectionate moniker for a caddy. BIRDIE
a) When a golf ball lands in a tree.
b) A score of one under par on a hole.
c) An affectionate moniker for a caddy.

BITE
a) What a golfer does to an opponent whose cell phone rings just as he is about to make a critical putt.
b) When the backspin on the ball quickly stops on the green.
c) Something ordered with a drink at the clubhouse bar.

BOGEY
a) The image evoked when a golfer’s opponent says, “Play it again, Sam.”
b) A score of one over par on a hole.
c) An affectionate moniker for a caddy.

BUNKER
a) A golfer who cheats on the scorecard.
b) A sand trap.
c) A golfer who sleeps on the course in order to get the first tee time. CHIP IN
a) What a golfer will ask his opponent to do when paying for a round.
b) When a short approach shot (one played to the putting green) falls in the cup (hole).
c) Call made by a golfer when he drops a Frito into his opponent’s beer at the clubhouse.

DRIVER
a) The person steering the golf cart.
b) The club that hits the ball the farthest.
c) A golfer’s motivation, i.e., golfing to win a client’s account.

EAGLE
a) When a golf ball soars so far the golfer loses it.
b) A score of two under par on a hole.
c) A golf course protected by federal law.

MULLIGAN
a) An idiot who drives the golf cart into a water hazard.
b) A free shot after a really bad one.
c) An affectionate moniker for a caddy. OVERCLUBBING
a) Using a nine iron to whack an opponent over the head.
b) Using a club that will hit the ball farther than necessary.
c) A term used by airlines meaning “to travel with a particularly heavy golf bag.”

Note: While a double bogey (two shots over par) is twice a bogey (one shot over par), a double eagle is not four under par (twice an eagle), but rather three under par. Go figure.

The Golf Dictionary: A Guide to the Language and Lingo of the Game by Mike Corcoran (Taylor Publishing, 1997)

Mulligan’s Golf and Cocktail Club: The Essential Guide to the Golf Game and Its Spirits … (Nuts & Bolts Series) by Mark Otto and Holger Buenning (DNA Press, 2004)

Ready to put your knowledge to the test and head out for a round?  For stats, tee times, course descriptions and more, visit the Palm Springs Life Online Golf Guide