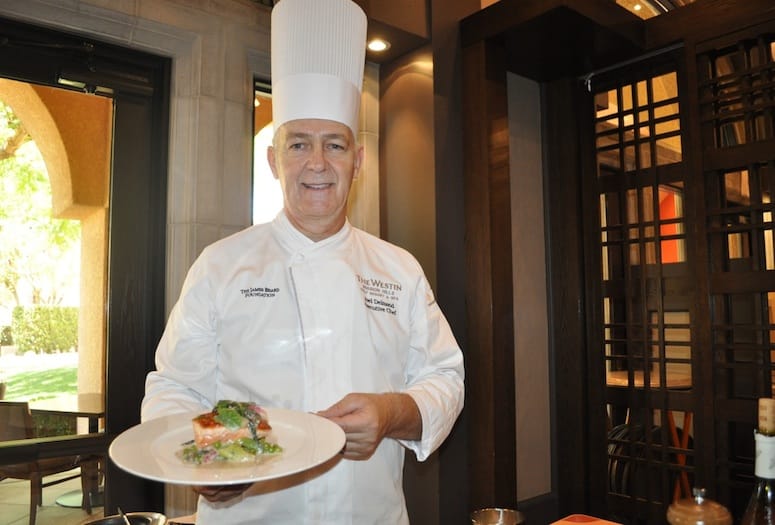 Executive Chef Joel Delmond, of the Westin Mission Hills Golf Resort and Spa in Rancho Mirage, loves to share his knowledge of food and wine with his guests whenever he can.

Which made him stop and think, “why not” to the idea of a trio of interactive wine dinners with Delmond and his staff hosting guests in the kitchen and dining room.

The Franciscan Wine Blending Dinner is the first of the Interactive Summer Wine Dinner Series starting with the inaugural at 7:30 p.m. June 20 in the resort's Oasis Courtyard. “We had a lot of fun (with the spring dinner series), but wine dinner are a little stiff and formal,” Delmond says. “For summer I wanted it to be more casual and fun.” And participatory for his guests.

Delmond is inviting a few of his guests into the Westin’s kitchen to join him in preparing one course for each dinner. “They’ll do everything for that course,” he said. “Then at the dinner they’ll explain the course and, hopefully, what they learned from the experience.”

It’s a chance for home cooks to learn kitchen tips and secrets, “and to know that you can do something that looks really hard, but is really easy,” he says.

Delmond recently prepared the Copper River wild salmon dish that will be the second course for the dinner. The star of the dish is the wild salmon that has a delicate flavor and pink-white flesh when cooked. The fish is accompanied by a mélange of veggies that includes wild ramps (early spring members of the leek family), leeks, morel mushrooms, sweet peas, breakfast radishes, dill, chives, and fingerling potatoes in a light pan cream sauce. "They will be blending the wines at the dinner,” says Executive Chef Joel Delmond. “It’s the first time we’ve done this."

The chef cooks the salmon to medium rare to preserve the delicate flavor of the fish. “So many people will only eat salmon that’s cooked to well done, but then they go out and eat it raw in sushi," he says.

In addition to the white wine, cream and butter, Delmond flavors the sauce by using vegetable stock made from the blanching water. “So many cooks use fresh water to blanch each different vegetable and then throw it away. You can make a simple, wonderful stock by blanching all the veggies in the same water and then letting it reduce,” he says.

So that all diners can learn Delmond’s kitchen tips, he will demonstrate each course as it is being served. The dinner opens with a quartet of amuse bouche, followed by a tomato water gelee with crab, the salmon, and finishes with stone fruits prepared several different ways.

The cost of the dinner is $85, as is the Coppola Wine Dinner with Chef de Cuisine Juan Leon on July 18 and the Rodney Strong Wine Dinner on Aug. 29. All dinners begin at 7:30 p.m.